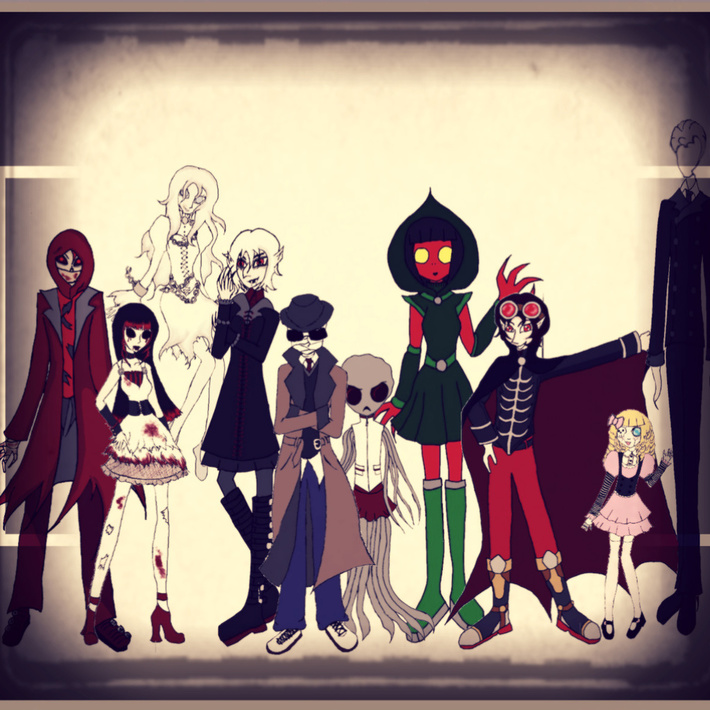 I'm doing something I've never done before, I'm asking for a bit of help with inspiration.  Here's the thing, I've been on this pirate kick lately.  Because pirates are swag.  And I've been wanting…Continue

I've been wanting to make some clothing for m Draculaura and I'm struggling with the construction. Does anyone know where to find some patterns for Monster High dolls?

Snippets From The Life Of a Sarcastic Vampire. (Updated Apr. 8th)

So I've been writing lately, not anything grand or epic.  Not even anything with an overarching plot line. Just brief little scenes with my OC's and the MH cannon cast.  I thought I'd share them with…Continue

I'm sure everyone who has ever been in elementary school was informed of something called a compliment sandwich.  You start with a compliment, then you give a piece of constructive criticism, then…Continue

Welcome Ladies and Gentlemen, Boils and Ghouls to my humble Internet abode!

The Children Of The Night, What Music They Make.

'Tis the prettiest little parlour that ever you did spy...

When The Things That Make Me Weak and Strange Get Engineered Away.

I Admit He Isn't Much To Look At.

And There's A Creepy Doll, That Always Follows You, She's Got a Ruined Eye, That's Always Open!

Something Wicked This Way Comes... Before I start, I just want to tellyou all I may no be around much for a bit.  Summer is a hectic time, add to that I am having internet troubles, and yea.  Not much time for this place.

Greetings fellow Monster High fans, I'm
Nosferina, not my real name obviously, but it suits me.  Call me Nos or Rina if you are so inclined.  I suppose I should tell you a little about myself.  Well I'm a very sarcastic person with a very dark sense of humor, this doesn't always translate over the internet.  Sigh.

My hobbies are many but the main ones include
horror movie marathons, long baths, reading, drinking tea, copious amounts of tabletop RPGing, and playing with my doll collection, I have eight at the moment.  An Asian Ball Jointed Doll named Circe, a basic Draculaura, DOTD Ghoulia, Spectra and four living dead dolls, Haemon, Sabbatha Blood, Orchid, and little Camilla, the first three are vampires (Draculaura is scared of them.) and Camilla is some kind of skeleton ghost, her and Orchid are quite sweet really, Haemon however suffers from delusiouns that he's hotter stuff then he is.

I'd like to hunt down an Abbey Bominable as she's my favorite character by far, and possibly an operetta, other then that though, I'm quite relaxed in my collection habits.

Sometimes I like to think of my self as a writer, perhaps even a good one. I dabble in short stories and have far to many ongoing projects.

The first a novel, or series of short stories, or, well I haven't decided yet.  It's about Penelope Dreadful, who's parents dissapear at sea, and so she is sent to live in a big spooky house, in a little spooky town, where she has to deal with strange supernatural phenomenon like an ghostly roommate, a vampiric uncle, and a local werewolf infestation.  There is probably a mad scientist thrown in there too. 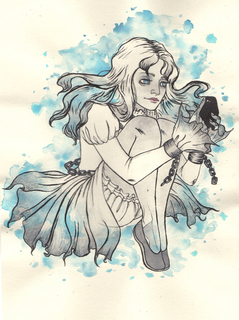 The second is a childrens story.  More of an idea really, it's about a couple of creepy dolls that live in an antique store owned by a retired bearded lady.  I don't have a plot yet.  But I am sure the wacky shenangians will abound.

And thirdly, a Victorian Mystery novel, involving cults, and demons and ghosts and probably a mummy, and some more ghosts.

If you want to see some of my writing enjoy this little link to my thread in the forums here.  It's nothing spectacular.

When I'm not deluding myself as to my writing abilites I like to act like some kind of artist.  Lower down on the page you can see some examples of my pictures, even more are in my gallery, I adore constructive critisim and comments.  But this isn't a shameless plug or anything.

If you're still here after all that, allow me to introduce my Monster High Oc's.  I warn you there are a lot of them.

Here they all are, lined up and smiling for the camera, well a couple of them are smiling.  A lot of them just aren't smily people.

To get a look at there profiles, just click this handy link.

The amazing picture of Nosferina up at the top was drawn by Reinaldo Aristy, The equally amazing pixel Doll of Fleeta Woods comes curtesy of PonPon, and my most recent piece, the superb picture of Phantasmagoria is curtesy of Degraala, infinite thanks to all three of you as well as any one else who's ever drawn my characters, I appreciate it deeply even if I haven't posted it on my page.

The background image is from Madame Talbot's Vitorian Lowbrow, the gear covered wallpaper is from steampunk wallpapers and finally the little pile of books and dividers are from Clipart ETC.

Who is your favorite Monster High Doll? (required for membership approval)
Oh god, Abbey sorta, but I'm loving Robecca too.

Hello, I just came across your page whilst researching my monster lovlies, I adore Abbey, she is one of my most favs., Im creating my own dolls bedroom and living areas, as doll houses are just so expensive to buy., so one uses her creative side and makes them instead...'upcycling' I call it. Anyways enough jabbering on....just wanted to say hi, and that I enjoyed reading your page here, its fangtastic  :-)

It was a while ago, actually. I seldom go on dA nowadays.

Saprowan on dA allowed requests a couple of months ago, and I was lucky enough to get one.

Woo! Thank you very much, Nos, I appreciate it! I'll do my best to attempt to let the ship sail again, because I just freakin' love the two together.

Now that you mentioned Robecca, I want to have her as the drunk dude who says "Praise the maiden of sweet ale" or something similar.

Hey, Nos! So, well, I'm planning to write a parody fanfic of Lord of the Rings, but with our MH OCs, and I was wondering if I could use either Jake or Winifred.

Winifred's obviously Shelob, and could Jake be well, Rosie Cotton? I know, it's an odd request, but Felica is Sam, and I ship SamRosie and whatever-the-shipping-name-for-Jake/Felica-is. Plus they both have the "she/he's really nice to me but I'm too shy to talk" thing.

Hello that was not about how to make one and I no grammer and It was I wanted to make it and thats all.

I have only JUST seen the comment on my page (I seriously haven't been there in ages) and I love it! The funny part is only a few days before you put it I started playing a certain Pokemon game again (either Platinum or Sapphire).

Merry Christmas Eve To All.

I may not be as active here as I once was, but still I thought I should take some time to send some Holiday well wishes your way with a quick Merry Christmas.  Best wishes for the new year, and best of luck in getting all the presents you want.

So a long, long time ago I won a Spectra Vondergeist in a contest, after more then two months of waiting I had finally given up on ever actually getting her.  Today a giant cardboard box was delivered to my doorstep, And inside was my Spectra Vondergeist, she's fantastic in person and has the softest hair of any of my dolls.  I may post pictures, when I find my camera, but my MH collection is now up to three and I couldn't be happier.

Guess Who Won a Spectra!

That's right.  I did.  Go me.  Now generally I don't like to brag or boast.  But I'm excited about this and have no friends in real life who will get it.  Anyways, does anyone remember that contest Twist was holding? The one for a free Spectra doll.  Yea.  I'm one of the randomly selected winners.  You can't see it, but I'm totally dancing right now.

I don't know when my prize will be shipped.  Soon I hope, but I can't wait to update you all with pictures of the newest…