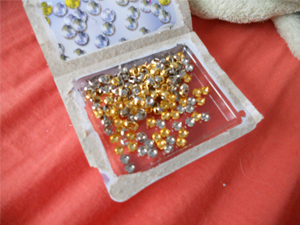 Welcome, boos and ghouls to my first blog entry! Today I will be covering some progress on my Monster High cosplay! I'll be starting with my progress on Deuce, then move to what I've been working on with Cleo.

Unlike with the doll, my boyfriend and I decided to do eyelets on the belt versus studs. They're easier to put onto a plain white belt than the weird round studs you see on the doll or even in some of the webisodes (it's inconsistent in the cartoon and changes frequently).

Anyways! First, I needed to cut holes in the belt to slip the eyelets into. We found a plain white leather belt from Hot Topic for $15. We didn't like their studded ones and the ones with eyelets already on them were of a cheaper material. In the end, we liked the look of a leather belt better. Because leather is thick, I used an X-acto knife to cut out a pentagon to insert the eyelet into. I could have done a circle, but the pentagon shape is MUCH easier to cut out than a circle, especially with a very sharp X-acto knife! 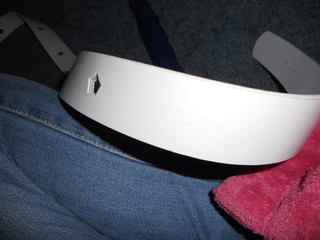 For the non-frequent sewers out there, putting eyelets onto any article of clothing can be scary. You need to hammer them through your material and if you're aim is off with the hammer, you can hurt your finger/s. I put 12 extra large silver eyelets onto the belt and even though I've worked with them before, I hammered my finger once. 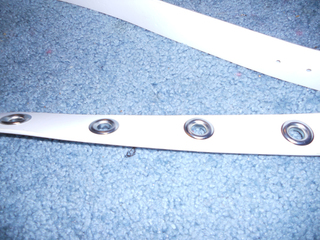 Because the eyelets were so large, they required a lot of force when hammering. I wouldn't recommend a child try this at all. Overall, it was very easy and turned out looking pretty good. :) One thing done for Deuce!

Today I spent some time working on Cleo, particularly her shoes. I started off first with finding them. That, actually, I did this past weekend. They're not as tall as I hoped I could find them, but they were perfect for what I wanted to work with, so I settled for them. 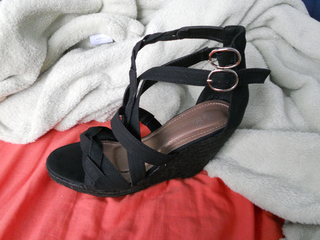 COSPLAY TIPS:
On the note of shoes for cosplay, I'd like to say it is VERY VERY VERY important that they are shoes you are comfortable in. Cosplay and costuming is no fun if you are in discomfort. Personally, I feel more comfortable in high heeled shoes, so it's usually not a problem for me. However, if you are a person who's feet are screaming at you after 10 minutes in heels, go for flats or a heel that is no more than 1 or 2 inches. It is ok to sacrifice that one tiny detail for comfort.

Now, on Cleo's shoes, she has it bedazzled along the bottom with little gold studs. I found gold studs in the BeDazzler section of my Michael's. For a package of 200 gold and silver studs, it was $6. I only used 30 of them for both shoes (15 per shoe) so the large packet is great because you have spares should the studs ever fall off. Now, I've never used a BeDazzler before, but the studs had prongs on the backside, that allowed me to stick them right into the wicker part of the shoe. I spaced them about 2 fingers apart and about 1/4 of an inch from the bottom.

Now after applying the studs, I didn't have any problems, but when I started to add the wraps, they started to come off. You can use any kind of craft glue to make sure they stay in place. I used Beacon's 3-in-1 Advanced Craft Glue. I got it at Joann's for $4 to give it a try. I wanted a glue that would dry fast, hold strong, and dry clear. This glue boasted just that and seems to be working well. It also claims it's water proof, so if I accidentally wander into any puddles, I won't have to work about the glue softening up and loosing the studs. 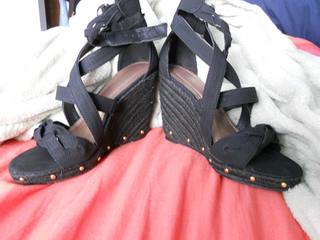 Next came the straps. I cut 4 straps about the same width and length, then painted them with tulip fabric paint. Each bottle is about $1.50 and so far, I've been impressed with the paint and how it dries on fabric. It feels like whatever is painted on was print-screened on and it doesn't stiffen up the fabric like other craft paints such as acrylic will do. Now, in regards to Cleo as the doll and the cartoon, there's things I like from both versions and things I don't like from both versions. For example, I don't like the look of Cleo's wraps in the cartoon. They work for the animation, but for a costume, I think it would turn out looking kind of dorky. However, how they painted her wraps on the doll, I LOVE. It makes my job so much easier and gave me the idea for how to get the "mummy wrap" look on her outfit. What I did below is also how I will be doing the wraps on her bodysuit. I think they came out well...Cleo is in the photo for comparison. She was my guide while I painted. 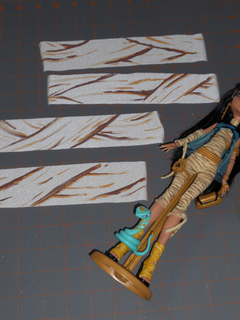 COSPLAY TIPS:
Always check paint on a scrap of the same kind of fabric you'll be using before doing it on your actual stuff, just to be sure you'll get the right effect you want. Play with your paint on your scrap to get a better feel of how the paint comes off the brush and just what color combination looks best.

After the paint had dried (and if you don't use a lot, it dries within 30 minutes or so) I took one strap at a time and attached it to each strap on the shoe with the same glue I used for the studs.

That sums up what I've done with the shoes so far. I still need to do the heel, but I'm debating on how best to pull it off. I want to cover that last black strap, but I don't want to attach a wrap to it because I need to be able to buckle it to comfort. I'll have to play with it a bit, but so far, so good!

Please leave questions and comments below! If you want me to elaborate on anything just tell me! I'm more than happy to go into detail! :) Comment by Zatanna on April 12, 2011 at 10:24pm
I can't wait to see both of the costumes finished and the complete cosplay. You'll both look wicked.

Thanks for the comments!

I couldn't think of what would be best to cut holes into the leather with. The x-acto just seemed like the right choice. Usually I just use my seam ripper to put a slice in the fabric for corsets and the like, but that didn't seem like the best idea with the leather. >.<;;; I've seen those grommet machines. That would have come in handy. XD

it's too bad you don't have access to an industrial grommet machine -- they're still scary, but they really minimize the chances of hurting your fingers. i have a job in scenic art, and it looks like our machines are the same size as the eyelets you put in deuce's belt. i doubt our punch cutter could handle the leather, though.

good job on cutting that leather with an x-acto -- i probably would have tried using a larger knife and ended up hacking my fingers to bits!