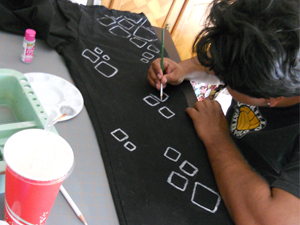 Hello once more my fellow boos and ghouls!

It is time for another one of my super fun posts! I am ubber excited to share my news today as I worked really hard and hard work has paid off. I finished my Cleo De Nile cosplay yesterday and it looks smashing, if I do say so myself. It's completely finished from the headband down to the shoes. This is really exciting for me because I've never had a costume completed so early before the event I plan on wearing it to. The only thing I'm missing is her phone and phone holster and I'm saving that for later. So! Let's jump back into this shall we?

So I actually needed to add the trim onto the sheer twice. the first time I did it upside down and the fabric puckered a lot. As you see, I ironed the edges so they laid flat. This helped with aligning the trim with the edge of the fabric since it isn't right on the edge. In the right photo you'll notice that the edge isn't straight and it goes at an angle. This is because when it has a straight edge and you attach it to the wrap-around, the edges of the sheer cross over with each other. As we know, this isn't how it should be. That is the reason I had to resew the trim. The first time I sewed it on, I attached the trim to the opposite end (the unironed edge) which made it cross even more. The angle gives the illusion that it is a straight edge when you wear it.

Measurements are always important. At least they are for me. My best friend for this whole part was the tape measure. As you can see, my fold/seam was one inch. I placed my trim half an inch from the edge, hiding the half inch of seam on the underside. I'm not usually so reliant on the tape measure, I just play it by eye. However, because I had to worry about the fold on the underside, I really had to be sure the trim was exact in it's placement.

Now corners are always such a pain. I really hate doing them. It's s tricky to lay it out the right way. You need to make sure that you keep the half inch space going from one side to the other, which is what I was trying to finagle in these photos.

When I got to the next corner, I helped myself out by putting a pin in where the half inch of one side meets the half inch of the other side. It ended up working a lot better than when I first tried. I wish I could have taken better photos of how to do the corners since it's usually a challenge. Maybe next time I'll make a video. That should be easier to follow.

The next photo shows it all pinned down, ready to be sewn. 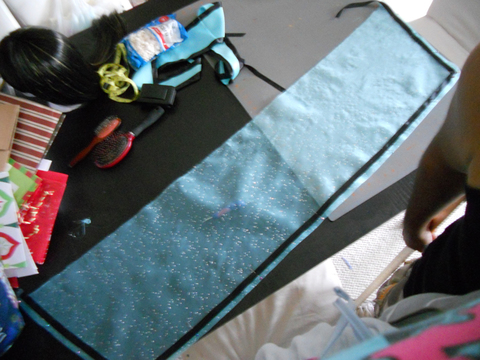 Now in one of my earlier posts I mention how I attached a ribbon to the ends of the wrap-around for wearing it. However, the ribbon eventually got loose while wearing it so it wasn't very efficient. I removed the ribbons then added eyes and hooks for better support. It worked out much better! 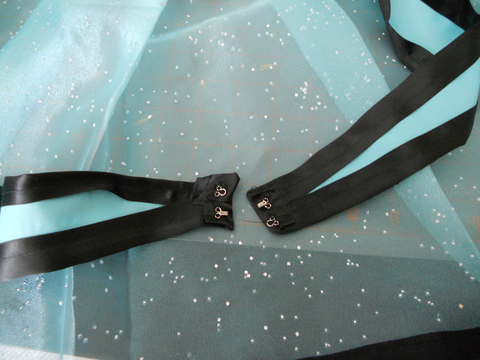 I ironed it one more time after I finished attaching the sheer to the wrap-around. Ironing it helped flatten the pleats I had to put in to avoid weird bunching. To avoid the bunching resulted in the pleats which made a poof. ^^;;; Thus, the ironing. They pleats look really obvious here but when I wear it, you really don't notice it. Especially since they're in the back. 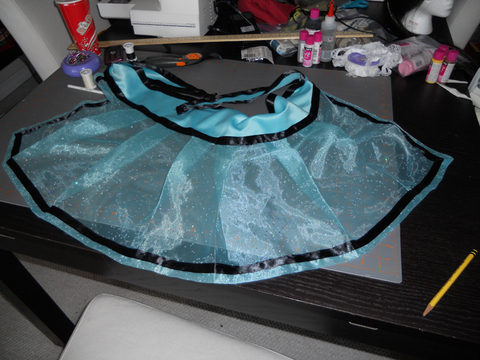 I got really lazy with taking pictures of the next couple things for Cleo. The headband and the armband were my boyfriend's projects for me so I didn't really think to take pictures of them. For the headband, I took a tacky plastic yellow headband with dots on it that I bought a long time ago on clearance from Target. It was really uncomfortable, but headbands in wigs don't hurt regardless of how much it may bother you when you wear it in your normal hair. My boyfriend first took a primer to the headband to get rid of the original color. This helps with hiding the original color and gets rid of any risk of those weird colors showing through on the new paint job. 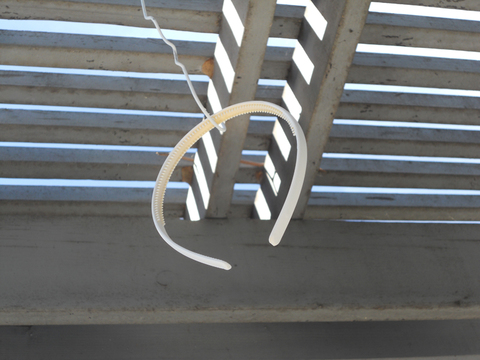 I believe he put two coats of primer on before starting with the gold. For those curious, we took a wire hanger and unwound it to make the hook that's suspending the headband. This allowed him to get the headband from all angles and to cover it evenly. It also avoided any mishaps that might have happened if it stuck to the cardboard while drying.

When spray painting anything, especially if it is suspended, be sure that you have some sort of paper, newspaper, or cardboard underneath your object. This keeps paint from getting on whatever surface that may be below. Such as in our case, a picnic table. 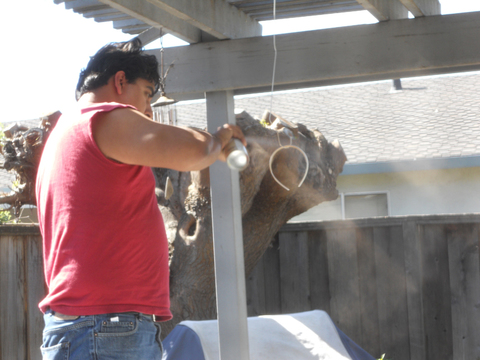 After the paint dried, I added these gems that come with a self-adhesive on their backs. This made for a quick and easy accessory. I didn't need a glue gun or anything. I just needed to be sure I put the gems on evenly. I just judged it by eye. 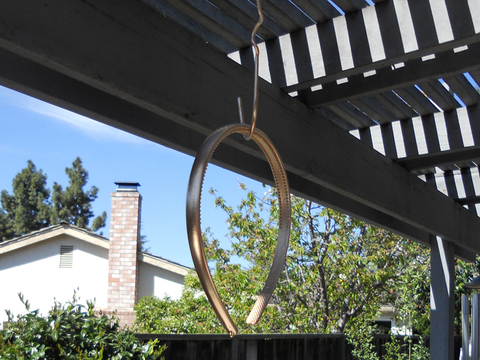 My boyfriend used craft foam, Wonderflex, and the studs I used for my shoes and a very sharp knife. I have absolutely no photos of him making it. Just one where he had just applied the first coat of primer. He complained about cutting out the triangles but it turned out looking really good! :) 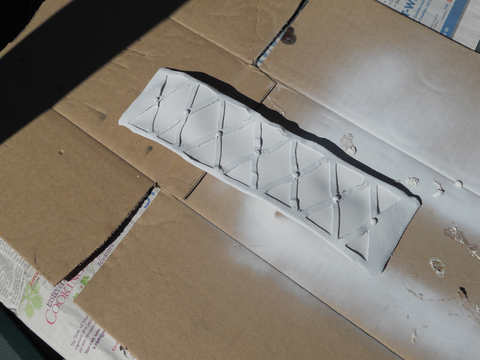 This was....an interesting part to get started on. ^^;;;; I'm sure if anyone walked into the room, they would have been wondering what we were doing. I made my boyfriend put on the old pair of slacks he wanted to use. This helped me mark out where the scales on the pants should go. I started out using a pencil to mark on them, but then it became difficult to see the lines so I switched to a while color pencil.

Need to mark on your fabric for a guide? No problem! Just use a pencil or color pencil. They show up on the fabric, but when you wash it, it goes away. I've never had a problem with pencil ruining my projects.

After I was done with that, I ironed the pants to make them easier to paint on. But first! I had to retrace my lines. I had just drawn drafts of where the scales would be painted on the pants. Now I had to redefine them to get the proper shape and form. 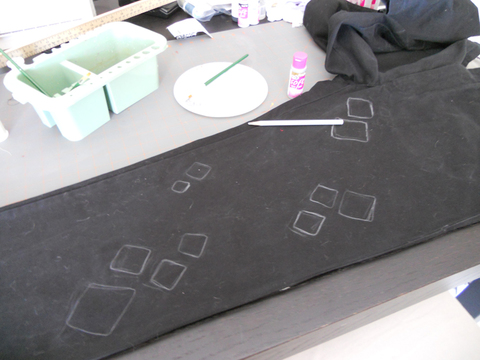 We worked together on painting the scales which sped up the process a lot! It also made my boyfriend happy since he got to help out with his costume instead of just watching me work on it. I still have the other leg and the backside to do, but it turned out looking pretty awesome! Once I finish with the pants I'll be working on the vest and tank top. Although the tank top might need to wait until my boyfriend comes back on the weekend. Placement and accuracy are very important to me, so I'm always trying on my costumes constantly to be sure they're looking how I want them to. same goes for when I'm making costumes for others.

So that was my progress for the weekend. Below is a teaser photo of how Cleo looks all thrown together. Once my photo uploads are approved (which shouldn't be too long after this post is approved) you can see larger, better photos of Cleo all complete. :) So hope you guys like the progress! I'm very very pleased with the results!

Please leave questions and comments below! If you want me to elaborate on anything just tell me. I'm more than happy to go into detail! :)

Comment by Zatanna on April 11, 2011 at 7:23pm
Sorry I haven't been on. This looks amazing! You both have done a fantastic job on this.

I'll be wearing this to FanimeCon in May at the San Jose Convention Center.