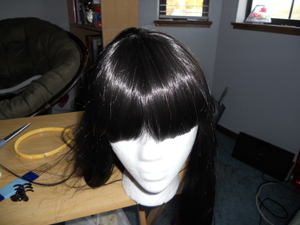 Received my wig in the mail today so I got to work on it right away. For those curious, I bought my wig off ebay for $18. It came as just a plain black wig with fringe bangs. I have to say this is the softest wig I have ever owned. It also doesn't tangle much which is always good.

Anyways, I needed to add the gold to the wig. And the image below is the result. This actually turned out to be a better course of action than my original plan to sew the gold thread into the wig.

I was actually inspired by Dinair's Hair Bling for getting the gold into the wig. Now although the Dinair Hair Bling is a cool option for real hair, I didn't want to spend $15-$18 on something that might not be long enough and that I'd never use again, so I just bought a spool of gold thread for $2. 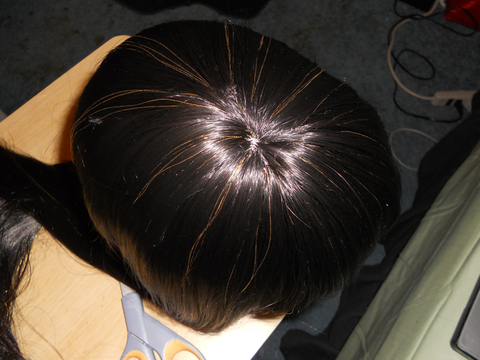 This works just as well as the hair bling might and is far cheaper and allowed me to have an unlimited length for the gold, allowing me to adjust it to my desires. However, I'd like to share the video with you on how to actually put it into hair (wig or not, it doesn't matter. It follows the same steps regardless.)

I had to play with the thickness a bit for the thread as it's much thinner than the hair bling, however, after playing with it in the bangs, I eventually got the right formula for the rest of the hair. And so the results were pretty amazing and accurate I think:

I'd like to mention that while styling this, the gold in the bangs became hidden at first so it felt like I didn't add enough gold. However, while wearing it, the gold strands naturally surfaced over the black. I don't know why it worked like that, but it did. Since I had my wig, I also found it a perfect opportunity to play with Cleo's make-up. Now the light-colored eyeshadow contrasts a lot with my light skin, but I think once I get the "tan" down, it will pop better. I love how green it makes my eyes look too. Almost in close comparison with the doll's :) And before anyone says anything, I know the jewel is wrong in color. I'm saving the right-colored ones for convention time. XD;;

Please leave questions and comments below! If you want me to elaborate on anything just tell me. I'm more than happy to go into detail! :)

Your welcome. Also maybe you can make a video tutorial on dracculaura and clawd costumes.  because me and my friend might be clawd and draculara. Im trying to get my mom and her boy friend to be Cleo and Deuce even though she doesnt really like the dolls, but she likes the wedisodes :)

That's a great idea! I'll try doing that! Thanks for the idea.

Can you please make a video tutorial on youtube so I can havr n idea on how to make t for this halloween?

Comment by Allianna Elven on April 4, 2011 at 1:58pm
seriously from some angels you look like abby from NCIS

Thanks! Me too! It's really fun dressing up as her.

I don't believe any active members of MHD.com has. I know there were a couple photos you can see of a Clawdeen, Frankie, and Deuce around Halloween time in the Photos section, but I'm not sure who the poster was. It's been a while since I saw the pics. But you should try! It's a lot of fun!