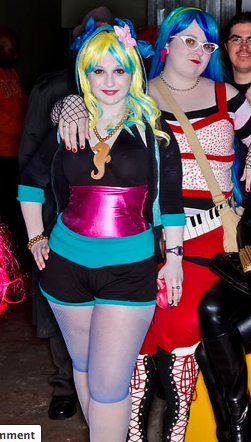 Halloween has come and gone, and I had a FABULOUS time. Parties started Friday night and ended sometime Tuesday morning. Wandering around as Ghoulia and Lagoona was such a blast, its one thing for kids to recognize us, but completely another when adults do and appreciate the work that I put into both of these costumes.

I've decided that my blog here on MHDolls is going to deconstruct the costumes I make to give others ideas to make their own, or to improve on my own ideas! After all I have a long series of MH Costumes now planned, and since Malkin can't make her own costumes quite yet (it's a work in progress she's taken a giant leap up to my Wig-Guru after these) she basically will wear what I make her, with some input on her of course.

I blame her entirely for getting me addicted to the dolls, so for Halloween I made her her Lagoona costume.

1. The wig: So much fun so so much. We purchased two wigs of identical style from www.epiccosplay.com, one in a light blue the other in this...sort of weird lemon sherbet colour. The light blue wig was sacrificed to the cosplay gods and cut apart into wefts and sections which were then hand sewn into the yellow wig to give it the streaked looked the doll has.

2. The hoodie: Being that Malkin and I live 2 hours apart, we went the easy route. We purchased black hoodie which I then took apart at the seams. The hood and main section of the shirt were covered in a blue hologram lame spandex fabric and the hoodie was sewn back up leaving a hole in the bottom of the hood for hair, and adding the rib knit onto the cuffs. Its actually a really really cute shirt.

3. Body suit: Again living 2 hours away we went the easy route and found a dance suit that was shorts and a halter top. I took it apart at the seams and added the metallic pink spandex then sewed it back up before hand stitching the rib knit waist band to give the look that the shorts are separate from the top.

4. Accessories: Malkin made these herself out of jewelry pearls and beads, the seahorse was so hard to find. Eventually we found one at a craft store for 1 cent....we're not sure how, or why, but we bought it anyway and painted it gold to match the pearls. You also can't see them but she is wearing a pair of wedge sandals she bought in the summer, painted black with the white stripes added on.

5. Make-up: On her legs Malkin has the fishnets, but is also wearing a pair of light blue tights from American Apparel to save on putting body paint on her legs, eventually we'll do the same thing with her arms and hand sew a pair of gloves from the same kind of nylons. The Make-up itself is Mehron Cream Blend sticks, which I highly recommend to anyone who's doing a Monster High costume. It goes on without streaking, and once set with powder stays on for up to 8 hours without needing to retouch, It also photographs beautifully. I would highly suggest having a friend around to help with removal, especially if you have it on your back, it took us about an hour and a half to get clean after the party. 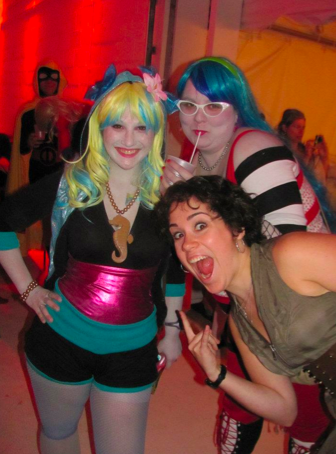 1. The wig: Done exactly the same as the Lagoona wig. Two 36" wigs were bought from www.epiccosplay.com, and spliced together. Now they do advertise as "tangle free". I wouldn't necessarily say that, they are however tangle resistant. Unfortunately someone's costume got tangled in my wig and it was a a hot mess that didn't quite comb out at the end of the night. There's also a comb sewn into the front of my wig because it is really heavy!

2. The Shirt(s): Malkin will attest that I am crazy when it comes to details. I once made a Jill Valentine battle suit from RE5...and hand drew on thousands of tiny hexagons onto the fabric because I couldn't find the right fabric....fast forward to Ghoulia. I couldn't find fabric with cherries on it, so all the cherries on the tank top are hand painted on with fabric paint. The same goes with the black and white shirt. I couldn't find one, so I made one! I bought two black and white shirts, cut them apart, and then sewed them back up together to form one shirt! It was cheaper than buying the fabric to make the shirt from scratch.

3. The pants: Fairly simple, I still need to add the dots on them, they're made from a basic red spandex and black straps that I stole off an old pair of TRIPP NYC pants that I bought back when I was in High School and are now my 'painting' pants. Nothing super fancy with them.

4: The Accessories: AND GHOULIA HAS SO MANY! She's a bit of a walking fashion crime actually, but I love her too much. They're hard to see but I do have the pink zipper earrings found at Amazing Party and Costume in Toronto. The lime green headband is one Malkin found at Arden's (also in Toronto, on Queen Street I think). The fishnet sleeves I already owned from a previous costume, and the necklace was one I had in highschool (again when I was in that goth phase that I try to black out). The shoes were...interesting. I wear a women's 12, and heeled knee high chuck converse shoes DO NOT EXIST. So the shoes are actually shoe covers that I made from shoe canvas. I added a bunch of white top stitching and small details, like the Skull on the heel and two eyelets here Chuck converse usually have them on the instep. I think they turned out, they survived the night, and lots of people were confused that they were boot covers. (also much cheaper than dropping $80 on a pair of shoes)

Last but not least, Ghoulia's glasses. I also found these at Amazing Party and Costume. THEY ARE SO WONDERFUL! I'm excited to do more Ghoulia costumes so I can gather a collection of these glasses in all the different colours.

All in all the costumes turned out well, I'm super excited to make Operetta now, but Ghoulia is always going to be my favorite.

Comment by Becky Yelps on November 4, 2011 at 4:53pm
you both look fantastic great job