This one is by- Chessie Smile, daughter of the Cheshire cat. Looks-LOOK AT MY PICTURES.

"DADDY! I'm going out!" i yelled up the stairs, fixing my shirt.

"KAY!" My dad yelled, flipping channels on the TV with his tail. Showoff. I laughed and slid out the door, slinging my purse across my chest. I walked a…

Frustrations of a perfectionistic doll collector

I've run into a rather serious problem (for me, that is) in my endeavor to collect the Monster High dolls.  And that is: finding dolls with perfect faces.  Here's an account of my troubles:

1) I received a Basic Clawdeen from Mattel's online store.  Her eyes were off-center.  Majorly off-center.

2) I purchased the Dawn of the Dance 3 pack.  Draculaura's eyes are askew.  One is much higher than the other.

3) I purchased a Classroom Lagoona.  Her eyes are…

I decided I would design Chiou's friend mentioned in her information. He's based on the Karakasa, which is a Japanese umbrella monster. I made him a captain of a Kendo team and used the Kendo armor to do some of the umbrella like designs.

This is just my sketch sheet of his possible clothing. I have tons of these print outs laying around to sketch over as I work on clothing.

So the first look at Kaze Kasa. Enjoy.…

Just last night i got the MONSTER HIGH MAGAZINE. the bad part is that i got online so i have to wait 10-14 days til i get it. i wish i could get it today. also here is some news- i'm waiting to find out if the website will approve it but i'm trying to set up a couple of new groups (The MH magazine CLUB!!!!!) and (The MH game CLUB!!!!!) If you have either one of these items then if they let me set up these groups then please join them.

i have almost all the monster high dolls. i hope to get Gil Gillington soon. i just got Abbey and Toralie for Christmas.

im new so hi and got clawsome pics of Spectra in the fog over here :P

Alot of people monsters have been asking about requests.And just to answer YES I do! So if you have a request just:

2.Send in the comment a picture of who I am…

So I ask my dad if I could have Spectra Vondergeist, after my brother gets a stupid video game for the Wii, and he says "No."! Oh, so my brother gets a game that he asked for a couple days ago and was asking constantly if he could, but I can't have a doll that I wanted for 3 or 4 months and just asked for NOW?! Oh, that seems really fair. I'll be just fine sitting in my room and thinking of ways he could die(my brother(! The doll costs $32 on eBay, but the website that dad uses(Amazon) the…

i am so confused  about why do we go to school

hello. ok, so this is the first time I've done something like this. I'm pretty excited.
Me and my friends are in college and got into Monster High very quickly. Two of us have started to mod them. (She does most of the painting and such, while I make clothes)
It's a huge deal for us now. and I thought, "hey, if I come to this site to see some mod ideas, why not sign up for it?"
so here I am. ^^

I hope to post some really cute pictures of the clothes I made, as well as…

Last night I finished the game, but I didn't become scream queen, Cleo did! I said nice stuff to everyone, what the heck did I do wrong not to become sream queen?!

A battle, a small concussion, and a dirty little secret...

"Melly, go, I need to protect you!" Jack said with fire in his eyes and the sharp blade in his hand. "No Jackie! Don't" I yelled. "Bring it!" yelled Demona, no longer in her regular human form, "I'll tear you limb from limb! Get away from Melody!" "Demona!" Jack turned to me with his eyes still firey red, "You know her?!" "Yes! She's my best friend!" As he turned to face Demona, Demona pounced on him clawing at his face and chest. "MELODY CLIMB UP THE TREE NOW!!!!" He yelled at me with blood…

I think. after Draculaura's book, Lisi Harrison should write a book about the life of Lagoona, Spectra, Abbey, or Toralie. That would Freaky Fabulous. 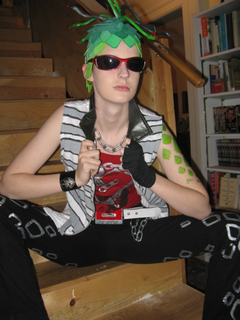 Congrads to Misa Sugar for winning the talent contest. And the others, so many great costumes. Really, I picked 3x as many as I needed at first. If you see a "talent" tag in your photo, it means I was considering it for the final.…

Just so you know, on my account, holt hyde codes dont work