These Monster High School Supplies will be available in Spain and other European countries. The products 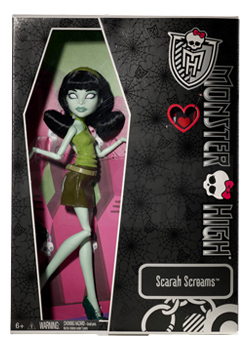 For the last 2 years, Mattel toys has released a special, "limited edition" San Diego Comic-con Monster High Dolls for the event. In 2010, the first year for Monster High, it was Grey-Scale Frankie Stein. Last year it was Dead-Fast Ghoulia Yelps, and in 2012 it will be Scarah Screams.

A look at Monster High costumes for cosplay, by Cesar of Italy. shown at the Nuremberg Toy Fair, Feb 2012.

It all comes down to something called "Osmoregulation", which is a process that keeps an organism's fluid content from becoming too diluted or too concentrated. In the case of freshwater and saltwater fish, this refers to salt.

Freshwater fish, when they breathe in through their gills, hold on to the tiny molecules of salt found in their environment to maintain homeostasis, and excrete the excess water. If you were to put a freshwater fish in the ocean, it would take in too much…

This showroom is full of Monster High party supplies, shown by the Riethmuller company, at Nuremberg toy fair, Feb 2012.

Music:
There It Is:…

"Attention Monster High students," bommed Mrs. Bloodgood from the intercome,"Will Frankie Stien, Draculara, and Robecca Steam please report to the office." All tree of them were stuck in the middle of a math test. "Frankie, Draculara, Robecca. You are exscused,"said Mr. Mummy as they started shuffling down the hallway. "I hope we're not in trouble,"exclaimed Frankie,"If I'm in trouble, my father will kill me." "Same here," said Robecca,"Exept my parents will LITERALY kill me" The three…

I thought that I would post what and how many dolls I have as of now. I'll start with the first one I ever got up to the one I got most recently. 1. Basic Frankie Stein, because she's my favorite, and I just had to have her when I saw her. 2. Spectra Vondergeist, I saw her and had to have her, she was just so awesome looking. 3. C.A. Cupid, I saw her on Wikipedia, and decided to get her when she came out. And last but not least, 4. Black and white, Skull Shores Frankie Stein.  And that is my…

Emma shows you to do your costume makeup like Cleo De Nile from Monster High.
Emma is one of YouTube's Youngest Makeup Gurus at only 8 years old.

Hey! It's Kiki here with the first issue of The Daily Dolly!

Today I'm gonna be telling you about what I got for my 12th birthday which was all the way back on April 26th, yeah.

Ok so I got lots of cool stuff and here is a list :3

Mod Been a hot minute.

I havn't written here in .. well I've only ever written once, why not update now.

First the useless stuff, I have hiccups.

Ok now to the more important things, I was recommended, approached and appointed as a new Mod of the Chats! NIFTY!! So yeah I get to help this site out and I'm all sorts of pleased as punch for it, I offer a unique maturity to the whole thing being as I'm about to turn 29 (On the 26th of this month no less!)

My doll collection has…

Today me and my parents went to Walmart. We went to the toys aisle. I grabbed Pinkie Pie, the only Pinkie there. My mom asked me if I wanted a Lalaloopsy Little or Pinkie Pie because if I get Pinkie PieI have a lot of money left and I get my report card next month so I would have enough for the Lalaloopsy we saw at Toys-R-Us, Charlotte Charades. So next month we could order or get Charlotte from Toys R Us or somewhere else. Yay! I decided…

I was looking online for monster high blankets only on the target website and i searched around the stores close to me. All they said they had was i smaller fuzzy blanket i had them hold it and since i was there i figured i would check to see if they had anything else and i found sheets and a comforter. My daughter was super excited to get it.

The Weekly Scream; I'm A Crazy Doll Lady. AND I'M NOT ASHAMED TO SAY THAT.

4/5/12  *Issue 2*
Okay so I'm 13 and not ashamed to say I LOVE MONSTER HIGH. The way the doll are so creative. Their special to me. My friends and sister make fun of me for liking this dolls but really don't care what they think it's what I LOVE so I'm not going to stop collecting just because of their stupid comments.

And I have ALWAYS loved  dolls. My whole life I have collected diffident types of dolls. Sense I was like 5 or 6…

Working on the future home of the COFFIN BEAN.... here is my work so far...lots of spray paint used on this one...please comment if you have any ideas? Devinic:Hey,Dawn. Why you are always eating candy? Is it because you didn't teach in kindergarten to eat too much candy? Aww! too bad!

Devinic-Ohh nothing, just here to see you cry like a baby and making your life miserable.

Devinic-oooooh do you want to start a fight!? Right on!! >:(

Killer Style: I like to adapt my dad's futuristic style with somethings from the present.

Freaky Flaw: Sometimes, the blaster on my wrist goes wacky and it shoots everywhere!

Pet: He's not exactly my pet, but Clank the little robot.

Favorite Activity: Hanging with friends or helping my dad save the world from evil.

Biggest Pet Peeve: Clank can get…