HELLO IF YOU ARE INTO SUPAH NINJAS FROM NICK CHANNEL THEN YOU WENT TO THE RIGHT PLACE . IM ADDICTED TO NINJAS . PLEASE BE HERE TO READ MY BLOG ITS SUPAH COOL GET IT SUPAH LIKE SUPAH NINJAS OK WELL I WILL LOVE TO KNOW THAT YOU LOOKED AT MY BLOG .

1st place:A drawing of an OC and/or there pet,a awesome comment on one of your…

Okay, so I have been brainstorming by myself.

I have come up with some CLAWSOME characters for Monster High.

~Leah Prechaun ( Daughter of a Leprechaun)

" I am a bit of the tomboy, being the only girl in the family. But if ever you need some luck, I'm right here."

~Dolly Van VooDoo ( Daughter of a Witch and Medicine Man)

"I can't go to sleep at night without my beloved voodoo doll that my Mom and Dad painstakingly crafted for me! Yep, I'm a…

Hey! A lot of you guys know that I like French smilies: =3D They are my life! I was sitting there, and I wanted to make something cuter than I usually do. At school I had been doodling smilies with little curly moustaches, as if they were the stereotypical French guy. Well, later I got tired of that. I had been asking random people what smiley should I do.

Then it hit me, GERMAN TIME!!!! I'm German! So why not do a smiley that would show who I am? But then I started…

Okay, so I made skulletes for four of Brianna's OCs. (I know, you said five but I didn't know how to show that your alien, was an alien.) Well, here we go:

And this is Nessa Von Loch, daughter of The Lochness Monster. 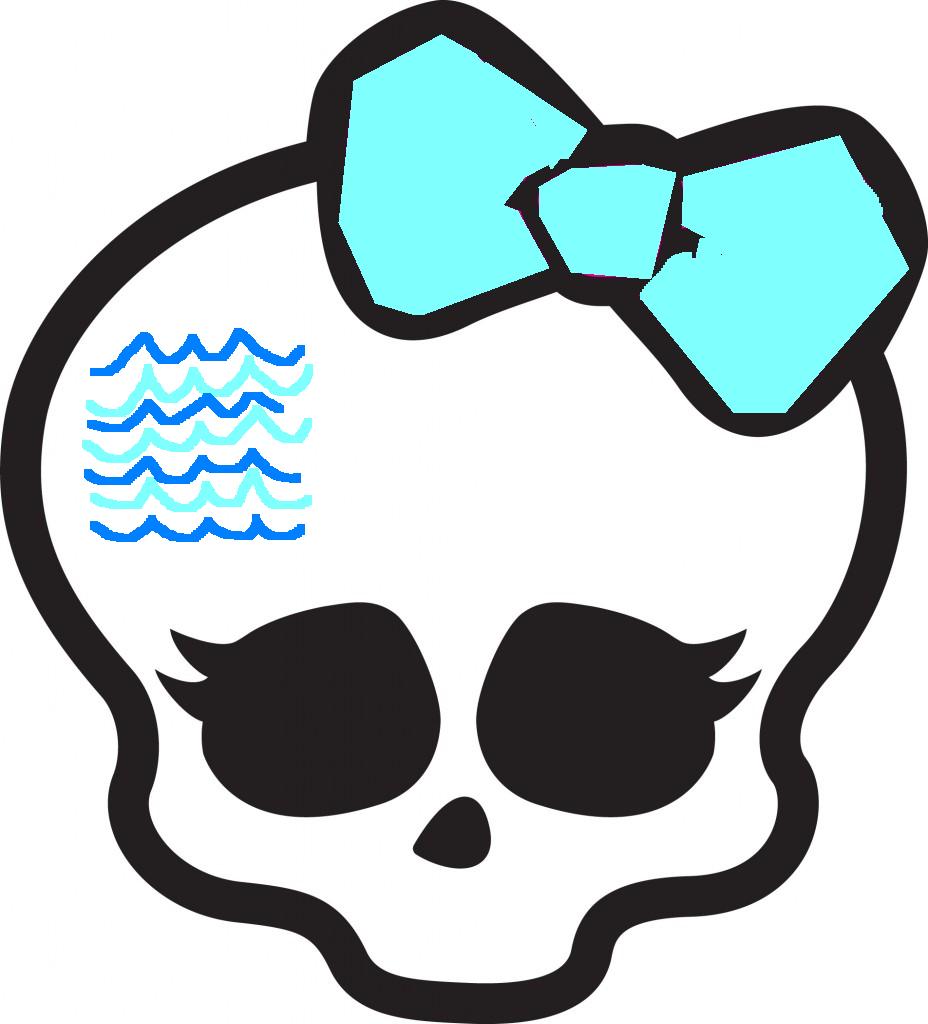 Oh My Geb! May 22 was my half birthday! If you can do the math to find out my REAL birthday, add 6 months to to that and you'll find out my real b-day! Oh and also yesterday was my school play Annie and i played a main orphan named July! Woo-Woo! July!

Okay so as you all know (if you don't, you need to learn), Spectra Vondergiest is coming out, along with Abbey Bomniable. But I have a question. My friend said that Abbey is the daughter of the Yeti. But her last name is BOMNIABLE. As in, the abomniable snowman!!! But she's not a snowman, I guess. Also, getting back on track, there is apparently a Draculaura and Clawd gift pack. Everyone's seen the prototype picture, and Clawd bio is online, so I guess it's true. There is a classroom doll…

Hey! If you ever need a skullete done just tell me! Heres an example of my art: 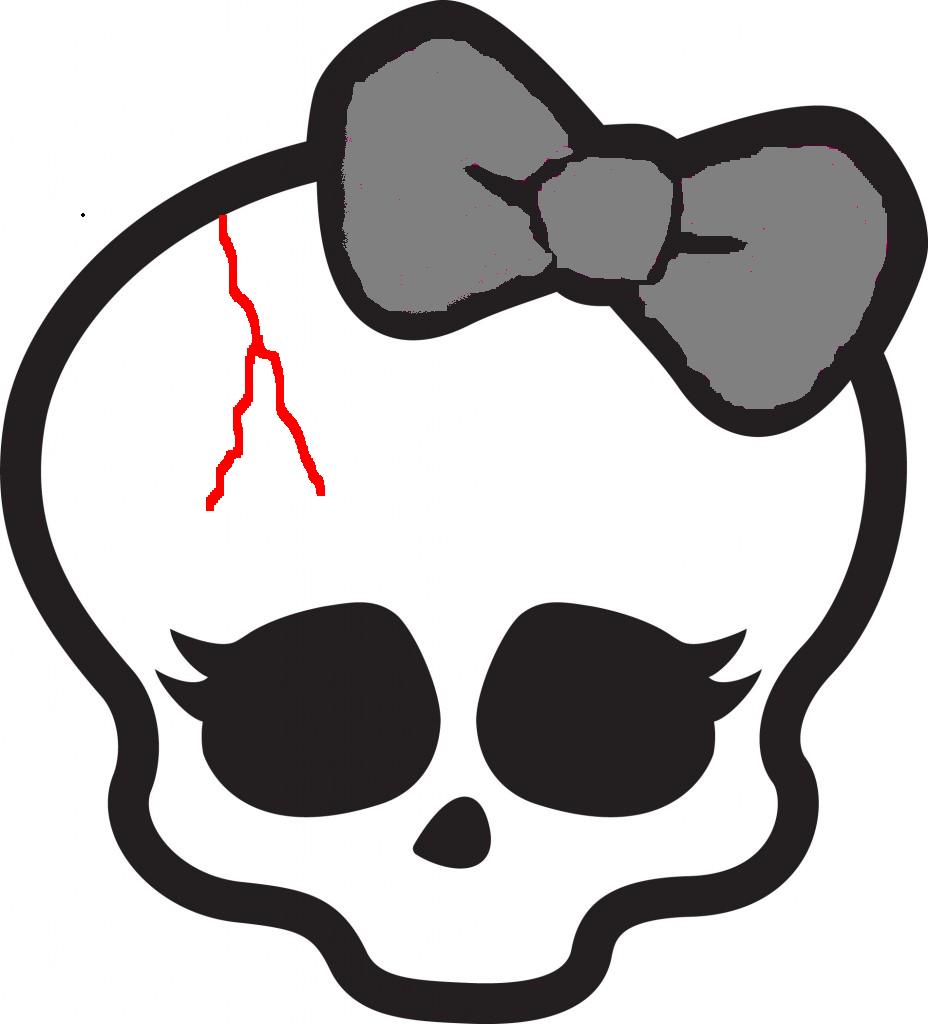 So, please, if you ever need skulletes or skulls, just ask!

I found a picture of Spectra's bio you can read!!!

Here it is. Finally one you can read… 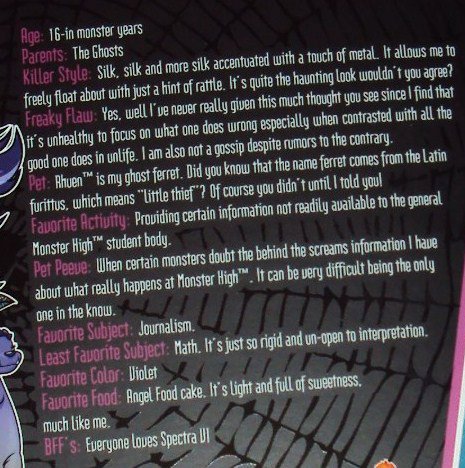 Clawde Wolf and Draculaura box set. Real, or fake? Like all of the rumored characters, I say, I don't know! But wait, he's in the Students page so I guess he's real. There are thousands of pictures, my only question is, where are they coming from? 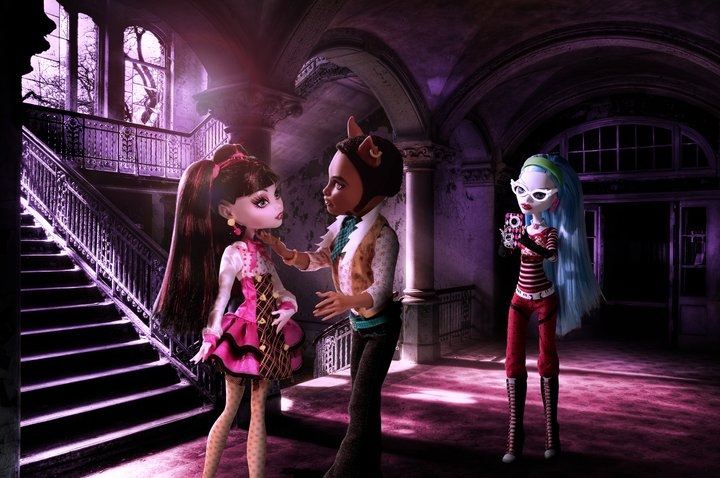 His hair is soooo gross! Its so weird! As long as he's in my house, he's wearing his little hat! Uck!… One of the pictures. Its really blurry. Sorry for all the blurriness! =3…

Hello Spectra lovers. Is she real? Is she fake? We don't know! We have thousands of pictures but that ain't enough! We need her in our hands and then we will have proof! We need her being sold in Target or Justice before we can say she's real! We have pictures, that doesn't mean its not a fake. It doesn't mean that it could be a home made doll. 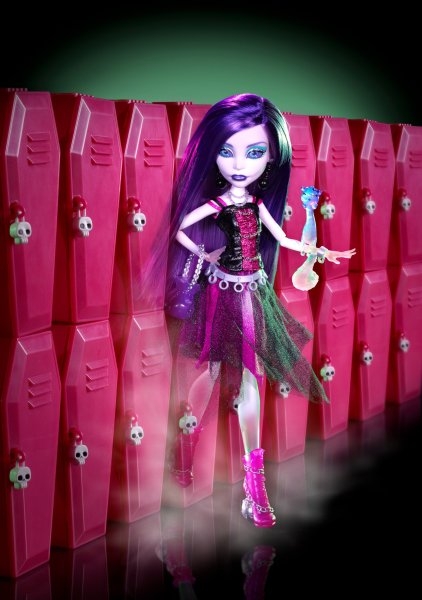 Hi everyone!  I, the one and only Felica Fright, has decided to reintirgrate myself into monster society.  You may have noticed I've been long gone.  This was due to the fact that I was losing intrest in MH (only in wanting to hear more doll news) and I was busy.  I'm glad I've been away; it has given me time to mature, so now it won't sound like I'm two when I'm typing.  I also have decided to completly re-do my OC, Felica.  She's too....bleh.  Not good.    I'll be kinda picking up where I… Continue

I am Alana Stupka

Hi I am Alana Stupka. I am thirteen years old and turning fourteen in a couple months and i live in Saskatchewan. My fav color is PURPLE and my fav num is 3. I love sports especially Tae Kwon Do and love camping and…

I Am taking requests

OK so i am taking requests for  skullette logos and normal characters so please, i may be bad im just starting but i try my best, here is a character i did for Flamin Cat:

so, feel free but i dont have too much time…

Hi! I am making tons of new OCs! I'm gonna tell you some of their names, and tell if you like them. So, here is the list of names.

Merelyn Maidroe (Credits to Michaela Jones who made the character)

Tell me what you think, and next week I'll tell u more about them!