Just picked up some MH swag.

A pair of headphones and an Operetta doll. Was hoping to find a Rochelle, but no such luck.

I saw a shelf full of Rochelle, several Jacksons and an Abby at the Carle Place TRU on Long Island NY Thursday,

FAO Manhatten had a whole shelf of Lagoona's Hydration Station and I'm sure you've heard but just in case you haven't this morning the TRU website lists them in stock for shipping. Happy Monster hunting dear ghouls. Babylon

Dani-Soo, who is going to Gloom Beach?

Dani-Oh, just curios or something.

Regina-Well i am not, because i am going to the catacombs to practice with Operetta all summer! :)

Everyone drops of they're notebooks.

Story of my Abbey Bominable

If you've seen my previous blog post, i said it was my second abbey bominable.

I got mine for christmas and i loved her.

At that point i only had lagoona and abbey. Suddenly her back would not move, so i gave it to my grandparents to get a new one. They searched in all the shops; tesco, asda, smyths, argos, etc, but abbey wasno-where.

Just as i was giving up hope of ever getting abbey again, i came into my room to find an abbey there.

My grandparents said they…

Please enjoy this free checklist I made for everyone to enjoy.  Here is the link http://monster-high-doll-fan.blogspot.ca/p/free-printable-checklist-2012.html.  Its free, just right click copy.  Then print from your computer.

I spotted Rochelle Goyle at the Beginning. I was like, "omg !" and i said, "Someone pinch me because i think i am dreaming! :O" Thats how you fell xD

Do ya'll think Kipling and Andy should be…

Name: Emerald Flame
Age: 16
Monster Parent: Dragons
Killer Style: I usually wear green, except when I'm playing in my band or advertising it, (FACTORY REJECTS)
Freaky Flaw: I shed my scales, a lot. I guess you could say it's a good thing since dragon scales are said to posses "magikal powers". Whatever makes you happy, dude.
Pet: I'm supposed to go to the maul soon to buy one.
Favorite Activity: Playing in my band, I'm the lead guitarist/singer. That or listening… Continue

i just wanted to know that were they sell Rochelle or if i dont find her ill start to panic ! ☹

Soo comment below please... Oh, and one more stuff.

Its my destiny to have her because i love SOO MUCH Gargoyles ! :D i panic when i saw her in EFSS Special! it was soo awesome!

Altough I like the original Operetta hairstyle, it was all mess up when I take her out her box -.- so now I want to change it.

Anyone has some idea? I'm thinking on a ponytail or maybe something similar to the styles I wear...

BTW, I've been thinking about dying my hair like hers! What do you think? I have my hair dyed in dark red... I just need a place to do it, and save some money. I wanna go to a good place, I don't want my hair messed.

I've just get my Operetta doll a couple of days ago *o* when I found she at Toys'R'Us... it was as she was calling me!

But I guess I should introduce me and my monster experience :P

I learn about Monster High because of my little cousin, who is crazy about them (as crazy as girls of my age where years ago with Barbie and Bratz at least) She show me some Monster… 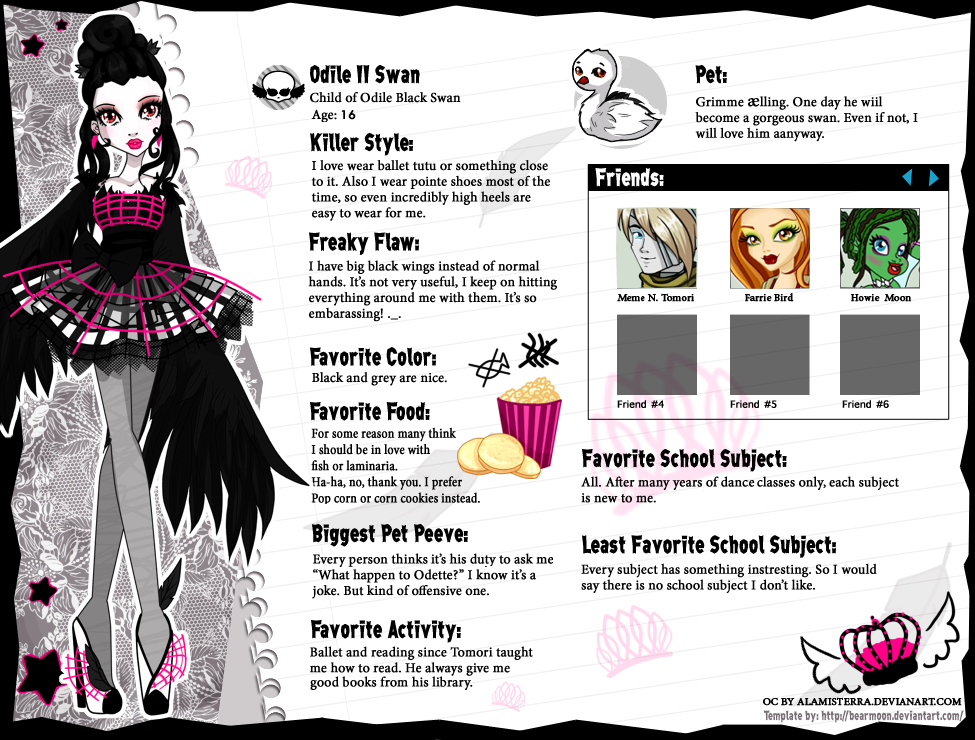 Monster High stuff i own:

OMG i just got some new dolls!!!

Feels about "Escape from Skull Shores"

From the Mattel toys property "Monster High", this is Monster High jewelry, by Fantabijoux of France.

These Monster High jewelry items will be available in France in 2012.

Fantabijoux Monster High jewelry included items and charms for the…

These are the dolls that i have

Volume 2 or Volume 3 or maybe even Volume 1

So as we know Monster High is on Volume 3 of their now biweekly webisodes but I was wondering which season you prefer more. Now I like Volume 2 better because their was more storyline to it. I like how every webisode was a continuation of each other and it kept me guessing what was going to happen next. I feel Volume 2 also was able to introduce new characters in a good way that would add a new storyline without throwing off the whole season. Volume 3 started out ok. I dont like how the… Continue

I made this page for my 5 year old daughter to show off her doll collection. Although, I believe I love Monster High Dolls now just as much (if not more) as she does! :P It's her fault....she got me hooked! lol I am about to turn 30 and I have no shame haha. I'm just a big kid at heart anyway. From what I have seen on here, I am not the only adult thats into these dolls so glad to know I am not alone.

So far my daughter has 22 dolls and I plan on getting her lots more :) We are…

Final Chapter of How Wolfgang and Davita Met

Davita woke up on Thursday. Early, very early. She woke up an hour earlier than she normally did, but she didn’t go back to sleep. She got dressed in a pale pink top, a pastel orange skirt that almost went down to her knees, and she wore black flats with little black flowers on them. She did her makeup, the way Wolfgang showed her. She sniffed the eyeliner because it was just a beautiful smell that reminded her of Wolfgang.
He’s so sweet, she though to herself, he’s like…

Tiny Snip-it Scenes I Have No Use For!

Mosuyo looked at the plane. She had to leave Japan. She was half moth half human, and all the RADs were in America. So she, Mosuyo had to leave Japan, all her friends, too, and go to America. She didn’t know how to speak English, or really any other languages besides Japanese, and she wondered how many people there could communicate with her. Mosuyo knew two words in English, and those words were “Stupid Westerner.”

Thomas looked at the shelves. He could only…

Hey,guys how are you? Good!Okay, so I'm telling you about my MH dolls!!!Earlier my mom ordered Frankie stein skull shores! She's coming in the mail on 3/11/12 or 3/12/12,anyways SHE's so awesome and sorry i don't have any pics up but i will soon hopefully:) Ok, on to my dolls so so far in my collection i have all the skull shores,all the regulars,all the dawn of the dance,all the gloom beach,all the dead tired,all the dress up packs,all the sweet 1600. That finishes of my colection.