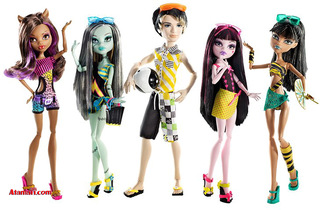 life as a monster

have you guys ever wanted to be a monster

I was on Entertainment Earth a website where you can buy toys by the case & this is what it said bout the DOD Wave 2 (sorry stil no pic)
Monster High Dawn of the Dance Dolls Wave 2 Case:
Dance with the dead from Monster High!
Your favorite characters of Monster High ready for some fun!
Unique gothic designs!
The coolest ghouls in school at Monster High are ready to cut up the dance floor and boogie the night away! This wave 2 case of 6 individually packaged dolls… Continue

Hi Guys I have a question... does anyone know when Cawd is coming out

On my way to pick up Lagoona from my local Target.  I pray she's in stock since both Walmart and Toysrus were out (why isn't anyone picking up the phones there? >_<)

So, what happened at the New York 2011 Toy Fair this year with Monster High?

Anything new and exciting, if so are there any photos???

So today is my b-day and guess what came in the mail the black and white comic con frankie sooo excited i'll have pix up soon just had to tell people who understand how awesome this is!!!!!!!!!!!!!!!!!!!

new monster high accsesories at Claires, and Toys R us

so i took my daughter shopping yesterday and we came across quite a few new monster high items....

So the first store we stopped into was Claires..for those of you who may not know what calires is its a store that carries accesories such as jewelry ,headbands,makeup and ect...usualy every mall has one..so anyways....Claires carries a few monster high products  like the dolls jewwelry makeup and hats..

yesterday we came across a cute monster high skull shapped…

Look at what I Found

You can use this to decorate your room:

Melody Carver is not so normal?

Heya everyone~! I'm Hadelyn and this is my first post huhu~! Anyways back on topic.

I have read around and in the book apparently Melody Carver is a girl who is new and goes to the human highschool or the same highschool i forget. But yeah she apparently got a nose jobb because her dad is a plastic surgeon and this sparked my interest~! I believe Melody could be the daughter of a witch and warlock because they want to hide her true identity and live normally. Also she has bad asthama…

Ok....so today after doing some birthday shopping for my lil one I was at justice and u know of course took a look at all the Monster High stuff I was just about to walk away when I saw this silver box behind a cleo gloom beach just a peeking from the side I freaked out in silence though I am an adult so I had to hold my composure lol it was a limited edition Frankie Stein I went to the register to buy it and surprisingly the cashier could not ring it up it keep comming up as item not found… Continue

-get a barbie bath tub the size of lagoona

-then fill a bag up with water lock it up tightly

-put the bag inthe tub and set lagoona in…

they are going to make a toreli doll soon!!!

you might be aware of new monster high charecters! the cat girl from season 2 toreli we think!  mattel are hopeing to make this doll summer! we know this cause our dad works for mattel! comment if your gonna get this doll!

This is my video for americas next top monster. After watching this video comment on who you think should win(on monsterhighdolls.com in the comments of this post). Here is the video: http://www.youtube.com/user/cookiecrumbs302?feature=mhum#p/a/u/0/kdDqATTLqpQ

I want to have a drawing contest it is that you draw one of the main characters RULES below: