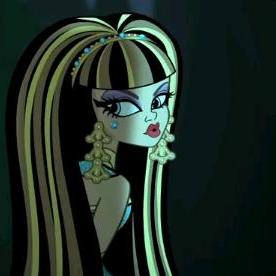 Attempting to find a foreign webisode.

I heard a discussion earlier about a webisode where the ghouls try to hook up Scarah and Billy. Is there a link to it?Continue

We don't really converse much about the more minor characters or antagonists, but I thought it would be a good discussion to talk about Nefera, as I've been analysing her character in my spare time.I…Continue

I really want to tune in with fellow Cleuce (cleo/deuce) fans! What do you like about the couple? Do you think they're meant to be? Do you think that royalty dating non-royalty is interesting? If…Continue

Hi! My name is Juliet and first things first: I hate Romeo and Juliet. Okay. Got it? Good.

I'm seventeen years of age and I adore Monster High. My favorite ghoul is Cleo de Nile. She has that Egyptian princess look that I just love and she's hilarious! To-tal drama queen! =) She's also super beautiful, and, let's face it, her voice is pretty sexy. And I'm saying that as a straight person. :p

I ship her and Deuce Gorgon so hard and it's 100% canon goodness. ;) If you ship Cleuce (Cleo and Deuce), message me! I'd love to chat and fangirl with you.

I'm in the process of writing a Cleuce fanfiction that I call "The Lovers of Egypt and Greece". It is set in time four years after they graduate from Monster High and Cleo and Deuce cross paths for the first time since their breakup. Cleo may be a media starlet princess and Deuce may be just some local cook trying to get somewhere with his life, but hey, despite media, it doesn't stop their old flame from lighting up again! Drama, action and a highly risque love affair ensues and they have to prove if their relationship is really worth risking everything in the end.

Want to hear more or even contribute some ideas? Hit me up with a message! :)

If you'd just like to chat, that's fine too.