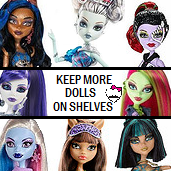 We are the members of MHD against scalpers! Join us if you believe only 2 of each doll per person to own and not sell (customizers may have more of course)! COLLECTORS FOREVER SCALPERS FOR NEVER!

We now have half a thousand people un-supportive scalpers on monsterhighdolls.com! Remember, don't buy into scalpers unless you HAVE to (such as living in a country that doesn't sell them).

BTW If you decide to organize the Groups by Most Members we've reached the top row! We now have 567 members and we have became the group with the Most Members with 51 (at the time) members.

If you've seen a scalper in your area, put a warning here! It will help people know to get to their store earlier, or whether there isn't one in your area.Continue

Does anyone know how to make custom monster high dolls? I will pay 20 bucks or less!!! No kidding. If you can make it with wings and clear body parts, reply back. I will mail you the details and if you want, I will do a review on it, tell them I could sell them, mail you all of the money, you will send 3 dolls a day for each doll, then i mail it to them. This is true! Do it if you need money. Also, do it if you can make it with wings, clear body parts, make shoes, make clothes, and make the…Continue

Should Mattel work Faster or Slower On Makeing Monster High Dolls and products?

They sertenly are rich enough with all the monet we give them for the freacky fabulouse dolls! Why not use it to hire more people and work faster? That way they could work faster annnndddddd get goood cwolity!!! Do You Agree?

Anybody else getting Pat Wentworth messages?

You need to be a member of Keep More Dolls on Shelves! to add comments!

Comment by Gore-geous Gab on July 23, 2017 at 10:28am
I think Great Scarrier Reef will be the last on my shelves. Sigh... I really hate that Barbie-like-mh-reboot thing!

I keep all my MH dolls on my shelves

Comment by MHmom2RAS on October 28, 2013 at 11:34am
I want to have every doll from every wave, every playset. Def working on it. My dghtr has so many MH clothes they are busting out of drawers & her closet..MH addict!

I think its fine to have every doll from every line! I will get as much dolls as I want! :)

One time i saw like a 90 year old guy just stacking MHD'S into i think about 7 carts maybe more.

Can't believe that ever after high is taking MH place!!

I don't want MH to graduate

What will i collect now? I'm not having ever after high because I really don't like it.