We've been out & about to several stores and popped into WAL MART  and found the MH shelf totally empty. They had been marking down the budget dolls and now no more in stock..in their place are new Harry Potter dolls. Tues Morning has several MH dolls at good prices..Ross has a lot of Shopkins, Barbies ..DD Discounts has a lot of MH/EAH doll and doll sets..Dollar Tree has gotten the mega blocks MH figures for 1.00 ( Dollar General has them too )

Today at Dollar Tree I found 2 EAH books and 1 MH book for 1.00...Great finds for my collection.

Also came home recently with 3 Beanie Boo's from Goodwill that were bagged & sold together.. 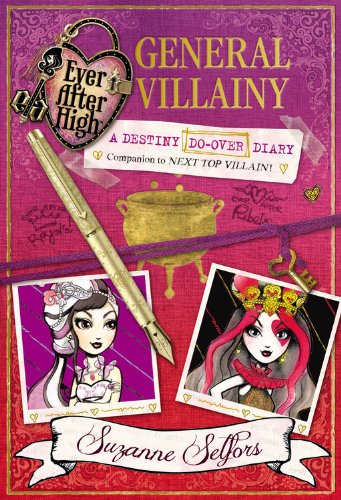 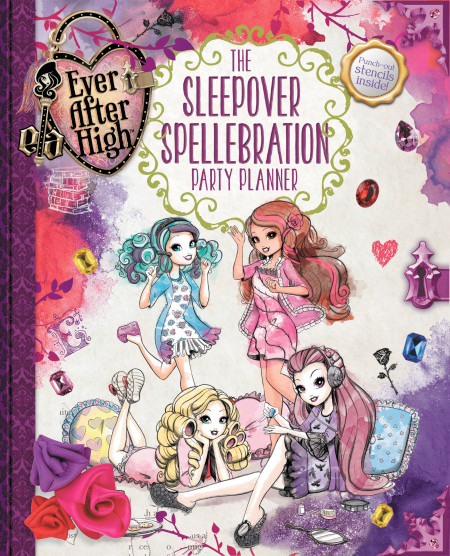 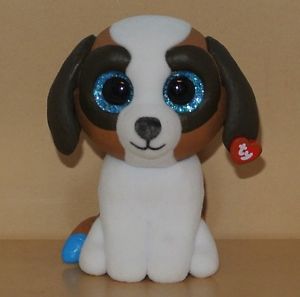 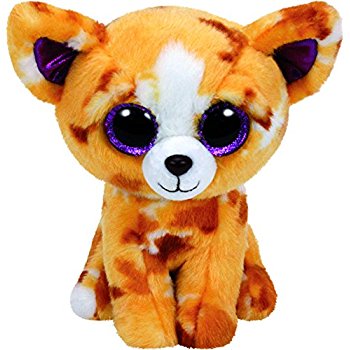 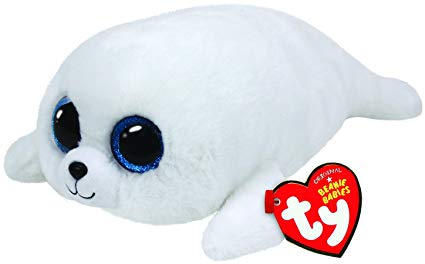 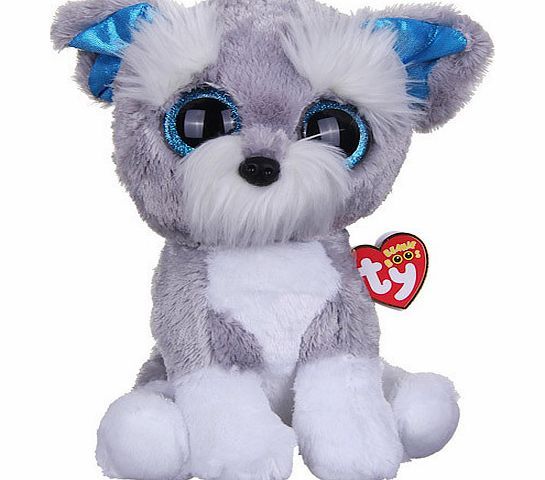 The link does not work at all even if I copy and paste it. The title is: moxie teenz/liv hand made wigs-they stay on better than the originals. It is on the page but strangely it is not the first one to appear. It is strange. I don't know why but it irritates me highly! Grrrrrr

Happy weekend to be :) Thank you for the link..I typed in what you said and the link did not work and when I went with your description I found a couple and bookmarked them..Thank you for sharing..I am so glad the weather held out & NO rain. Love your new dollies too. I am so Happy for you. I was really hoping you'd find some new goodies.

Happy weekend to be Hugs,

I hope you could see it. It is hilarious and bonkers this "Moxies shaking"!

lol...they are so cute! They wish you a great week-end!

Thank you my Friend for your lovely wishes..I hope once more that the rain holds off until nighttime so you can go back to the sales & find more Moxies.

We took a trip to Our Target on Mon night and wow....Only the little Mini fig ( 2 of them ) for MH and Cleo boxed with her Brother/Sandy set for 20.99..That was it...Descendants seems to down to 1-2 dolls too..They switched the aisle around and have some Star Wars dolls on sale. While looking at the clearance on end caps My Guy found this mini Starfire marked down to $1.48 and the Sandy De nile set with her highchair for $2.68..and discovered a New Shopkins Snap build set for $1.99 and of all things we ended up with the Kitty Kitchen table set with doll. (I collect Kitty Kitchen sets ) 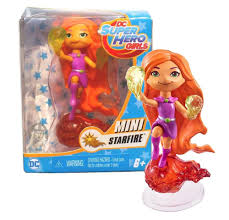 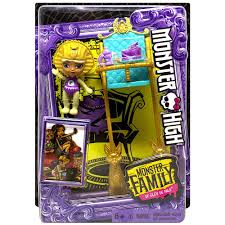 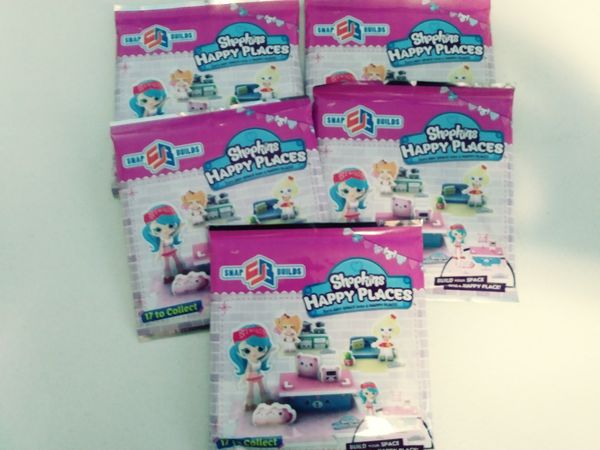 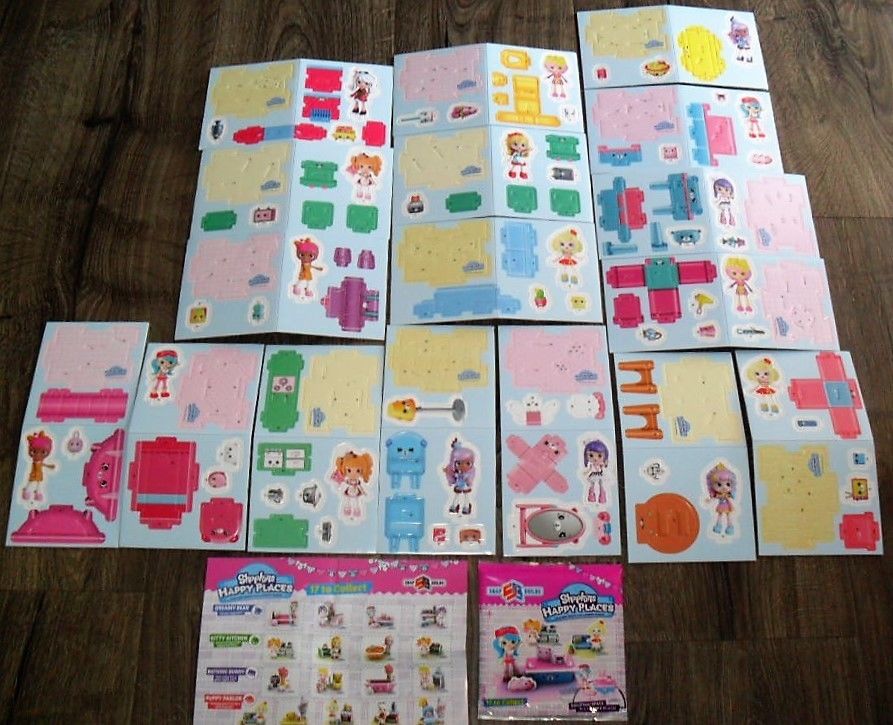 LOL You make me laugh! It was a good shopping trip. I have never seen the Shopkins snap builds. They are quite cute. I would not mind to have a few more Shoppies but I find it difficult to find them for a decent price.

Here, the toy section is s disaster (for my taste). I don't like the dolls I see. And of course, no MH.

This week-end has been bad for the car boot sales. It rained nearly all day on Sunday. I went to 2. There was not much but I managed to find a few things. I'll try to take pictures and post them later.

I wanted post a link but I can't make it work at all. It does not work either if I copy and paste the address. Maybe my computer is too old... It is so irritating...Grrrrrr

Have a great Thursday

It was a good trip,..I am happy with our little finds..We went out to shop Ikea & after dinner there went to the Target across the street and they had the same Cleo doll with her siblings and 1 mini fig ..their Descendants doll was marked down 50 %..

I am glad you found some goodies at the sale..I hope this weekend it will be better for you. When links give me a problem I usually save them to notepad or wordpad first then copy/paste them to share.

Wow! It works! Thank you for the tip Maureen. You are a star!

This You tube channel is hilarious and bonkers. They make silly videos with Beanie Boos. Could not resist to post the video. So many Boo's!!! lol

I'll try to take pictures today of my charity shops and car boot sales finds. Not much but better than nothing! lol

Happy Fri :) Oh yes, if I go to Ikea I have to eat in their restaurant. I always get their meatball special...which is 10-12 meatballs with side of Lingonberry sauce, vegetables and french fries...( you can switch out the fries for mashed potatoes but I prefer the fries. ) I love to walk around & shop there...( we have some Ikea storage boxes and shelves.) I can now wait to see the Boo Video :) I am so glad my advice helped in regards to the link.

LOL I haven't been to Ikea for ages! I will try to after doing a clear out. These meatballs sound fantastic! I don't eat meat but they sound fantastic for people who do. I like storage boxes and shelves from Ikea too.

So after so long, I managed to take quick pictures of last week-end car boot sales finds. I went to one on Sat, it was terrible, did not find anything and had anyway a pretty bad day.

On Sunday, I have found a lovely Chinese doll called Abbie dressed as Princess Jasmine. She is cute and I like the small booklet all written in Chinese she came with. I also found a MH book. Not for my age group (!!) but It is fun and I never had any before! And a travel bag (for humans!) not pictured. 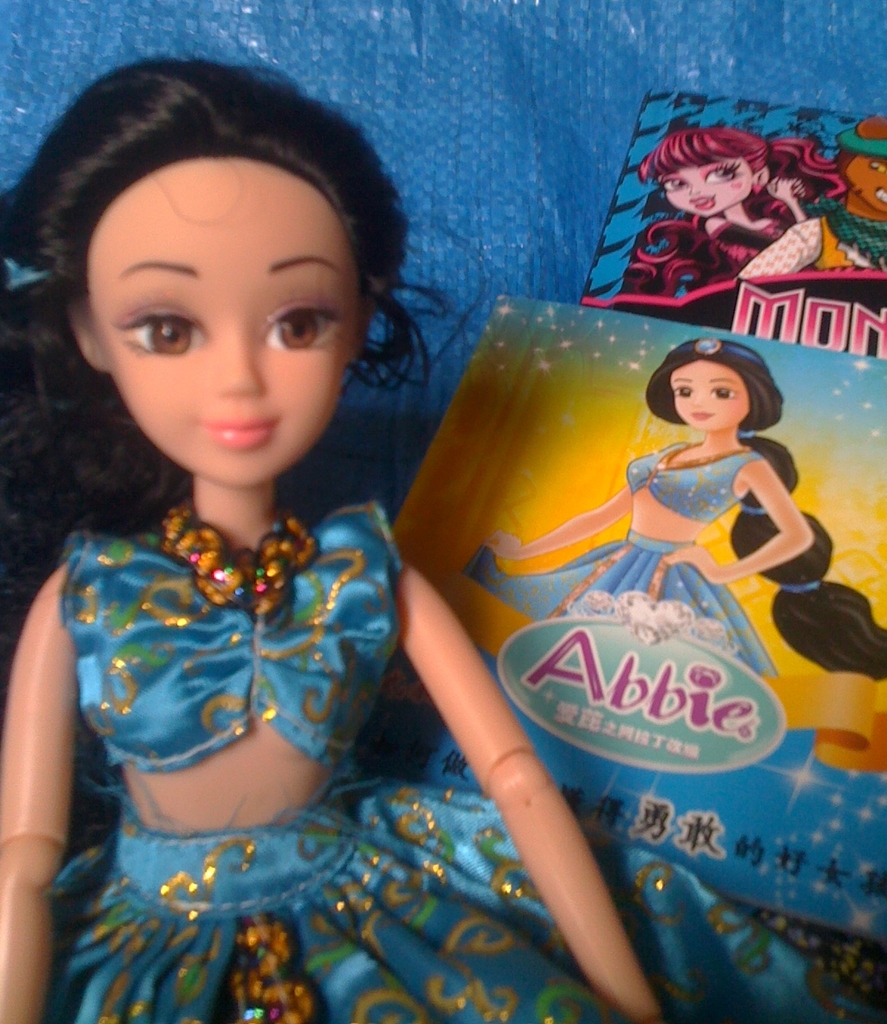 On Monday, it was bank holiday so another boot fair...unfortunately, it had rained nearly all day on Sunday. The field was muddy and there were hardly any sellers!

So I have found 2 fabulous Mexican skulls. I am not keen on "breakables" but I like them a lot. And a few toys...Another Darla (I know, it is silly but she was so ridiculously cheap, I could not leave her). A mini Beanie Boo, Daenerys, Raven with marks on her face. The people I bought her from had 5 Raven dolls in terrible condition. It was heartbreaking to see them in that state especially because it is so difficult to find EAH dolls. This one was the only one with her original outfit. Her clothes are new and nearly complete. In fact, she is new. They just have ruined her face. Poor Raven, I don't think I can save her but I will use her fantastic boots and clothes for other dolls. These are Dragon themed finds! lol Everything was ridiculously cheap probably because there were not many buyers either. 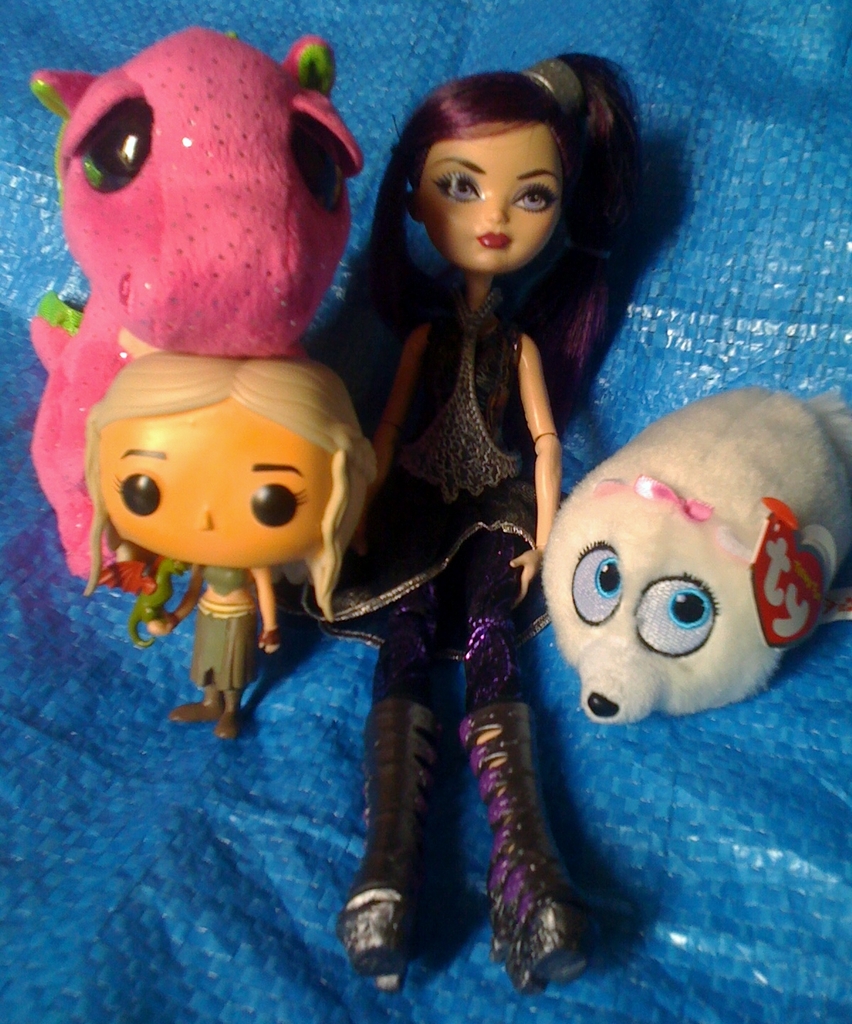 And to finish, on Saturday, I went to a charity shop in an area I never go to. It made my day better. There, I have found a bigger version of Cinder! lol He is so handsome, I had to take him home. He was also only £1 which is very cheap for a charity shop and such a handsome dragon! So now I have 2 Cinders (2 different sizes and...2 Darlas same size, how silly!!!) Actually, Darlas have quite different faces... (any excuse...) 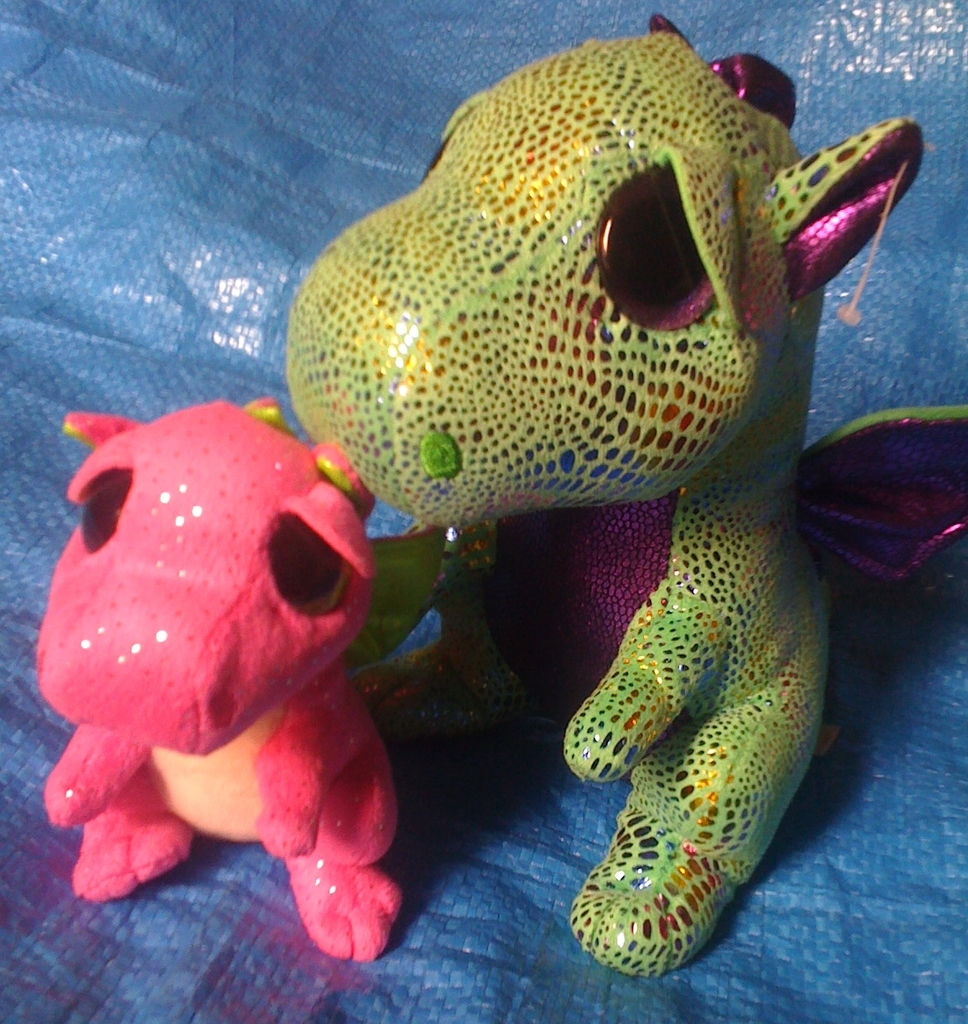 So cute!! (2nd Darla and bigger Cinder) and I said I will never fall for the Beanie Boo's...

There were hardly any dolls in both car boot sales. NO Monster High, no MH accessories, no Bratz,  Only 2 Barbies not very interesting and the tortured Ravens. NO DOLLS!

Where are the dolls? And it is not the first time I notice. Is it the same where you are?

I hope you will find new great things thrifting and more Shopkins and Beanie Boo's.

Have a great end of week

Permalink Reply by Maureen McNeil-Finerty on September 1, 2018 at 3:25am

Happy weekend :) AWESOME finds ..I have the larger sized Cinder too :) I love the Sugar skulls too ..amazing finds..that MH book looks great & I would have bought it too..I have not seen any new dolls or pre loved dolls in shopping trips..the store shelves are empty & now second hand stores.I am hoping our thrift stores will have a large collection of dolls to sell for the holidays. (They did that in the past ) Your new Abbie is a gorgeous doll :)

Thank you for the new link :) Happy Weekend Hugs & hope the sales are packed this weekend,