Also, the key word is constructive criticism.  Which means give reasons.  If I feel anyone is being needlessly mean or just flat out flaming I will simply delete your post.

This is a bit from an Alice in Wonderland Rp I was in.  I was Alice and The Hatter.

Alice after some time walking had finally cooled down sufficiently to come to the decision that she would just have to be civil with everyone else she met; she was after all a stranger in a strange land. And no sooner had she decided this then her resolve would be put to the test as a long table with a great many tea things laid out on it and precisely two people sitting at it came into view.
"Excuse Mr. Hatter, Ms. March Hare, may I please join you for tea.” Alice felt terribly childish asking this but was getting thirsty and her boots were uncomfortable.
“No you may not.” The Hatter snapped then turned to go back to conversation.
“And why not.” Alice asked as politely as she could manage.
“No room.”
“There’s plenty of room.” The strangest sense of déjà vu.
The Hatter turned to respond but stopped and instead simply stared at her for a moment. “You’ve gotten taller.”
“That happens when you age ten years.”
“It hasn’t happened to me.”
“Have you aged?”
Again The Hatter found himself at a loss for words, it wasn’t something he thought about often. He stared at Alice again then turned to stare into the bottom of his teacup. There was a long silence.
“Can I join you or not.”
The Hatter snapped out of it at once. “Do you have the answer?”
“I don’t believe I have the question.”
“Yes you do I asked you last time you were here.”
“Well I can hardly be expected t-”
“You can be expected to anything, weather you do or not is up to you.” The Hatter jumped in furiously, “Now do you have the answer.”
“No.” Alice stated.
“Then you can’t have tea.”

1) Very accurate, especially because it's not drawn using a base.

2) Would have look neater if it was inked 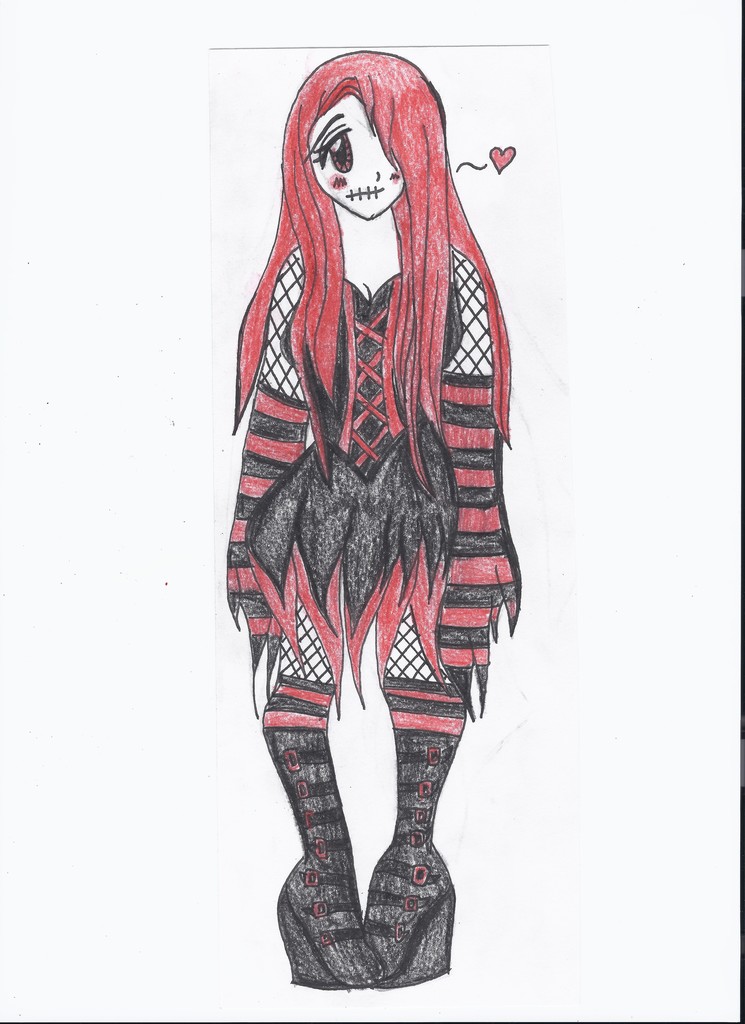 2.  The body proportions seem slightly off, but that might just be the shape of the clothes.

3. The outfit design is really cool.


2. Coloring is beautiful but could use more contrast. 3. Detail, once again, is breathtaking.

Great job with the coloring

The body proportions are off

2. The Skullete seems too pixelized (I don't think I spelled that right).

Sorry this is more than a paragraph, but I don't care it's shouldn't take more than a few minutes to read. This is being told by Luna Fangs my OC (I am Sadie so you know). Also this is shorter than normal because I was in a rush while making this.

I was sitting in my room that day. Just srtrumming my Les Paul that I bought decads ago. I liked the sound of what I was playing, a nice flow, it didn't sound anything like any songs I've heard before (note I stopped following music once the 1990s started). I decided to get up and find some blank sheet music. It took me awhile to find some on my desk becuase, well, it's a mess. I went over to my bed with pen and paper in hand, sat down, and started play by memory. As I play chord I'd write it down and every five chords I'd play all of them in a row.
Once I was satisfied with what I had I decided just to lay down in slience. Actually the silence wasn't possible in my house. Either I'd hear what my father was watching on the teleivision, or I heaar fighting ex-couple of my mother and father. They've been divorced for ages, but I have no idea why my mother doesn't kick my father to the curb. I guess she's living in the past when divorced rarely happened.
Anyways used used that "slient time" to just think. I'd get some really idiotic ideas from this, the most idioctic was to stalk Ichabod Bloodgood. This time I got one of my best ideas though. I was thinking of a way to make those chords matter. I thought I needed to start a band. I knew of one crazy drummer who might help me get it sarted. Right at that moment I called Sadie Skeletol.

1. You do a good job setting up that Luna is a lot older then she appears without spelling out, Hey I'm a vampire from ancient rome (it was Rome wasn't it?)

2. The exposition is a little clunky, and there are a couple spelling mistakes, so run it through a word document real quick.

3.  You do a good job of conveying a cluttered household.

Here's mine, more writing, it's the first paragraphs of the story I'm working on.

It was a dark and stormy night.  Or at least looked like one, technically it was still after noon but at four pm in early January it already looked like night, what ever sunlight that may have remained was smothered by an oppressive cover of thunder clouds.  The overwhelming grayness was only broken by a bright yellow taxi that drove along the quiet country road, and inside it a seventeen year old girl stared out into the downpour, quietly pondering the likely hood that lightening would strike the car instead of the claw like trees that dotted the roadside.

Penelope Dreadful, that was the girls name, although all her friends called her Penny so I suppose we should too, had been thinking about death a lot lately, not necessarily her own, not even the recent demise of her parents, just a sort of non specific realization that life was very fragile, and at any moment a bolt of electricity from the sky could shoot down and end this tedious car ride.  Glancing briefly at the slightly too quiet driver she wondered if that might not be such a bad thing, it would certainly make things simpler.  She stopped herself before her mood could darken further and applied emergency ipod therapy, blasting something loud and upbeat through her ear buds as she went back to staring out the window, even managing a little half smile at the disconnect between the real world and the music pouring into her ears.

The winding ride continued like this for a while, the tedium causing Penny to nod off.  Before it eventually pulled into the driveway of what must have once been a spectacularly appointed home, but now loomed darkly on the horizon, graying paint peeling, windows somehow darker then the sky staring vacantly out.  Despite herself a shiver ran down Penny’s spine, followed by another odd little half smile as some thunder clapped, it bordered on cheesy really.

A lot of run on setences, though that may be intentional

I like the brief part where it talked to the reader....

Since it's easier to link it this is something I've started a little while ago:

I really enjoyed your writing style, it was very neat with no errors.

You over explained things a bit (For example the outfits) which was distracting.

Here is some of my recent work :)

2. It looks a bit...awkward. The proportions look strange.

The crash of you

In the steady stillness

When you'll not there

The Grammatical errors are a distraction.  It should be "a comforting feel"

Grammar again, epic-ness isn't a word and distracts from any mood, I'm also pretty sure it should be "When you're not there."  Instead of "When You'll not there."

There was always something dark in that corner. It was all right in the day when the bright sunlight streaming through the windows made the dark thing curl up into itself until it was almost invisible. But not quite.

It was even all right at night when the bedside lamp made sure it couldn’t get to close. Although her parents complained about the waste of electricity.

But hours ago the storm had cut the lights, now only the lightning, which she could not predict, and her flashlight were there to keep the dark thing away. She would shine the tiny pool of light in its direction every time it slithered with unnatural silence towards her. And it would stop. For a moment. And when the lightning came it would hide all together.

The flashlight flickered, spluttered, and then went out. She didn’t get to scream. And the next time the lightning flashed there was no horrible dark thing in the corner, but there was no girl either.

Permalink Reply by Annelise The Amazing on January 7, 2013 at 11:56pm
Creative!
A predicctable story.
Love it!

A poem I wrote.


My day brightens at the sight

I get a feeling that is so so right.

Shines into my world,as I jump with joy

I get so happy! Like I got a new MH toy!