Lost count. It's either 4 or 5. And this time, it has more than two sketches!

A tail comparison for the two fanon mermaid-esque creatures in my gallery. Left is Isolde's, the species White Cap Mermaid, and right is Mairin's, the species sea hag. All my mindless notes got cut off.

Sea Hag: Thicker (lives in colder waters), fins, thicker scales, fish-like collapsable fin ( call it collapsable because it can fold up, or something like it, as can the smaller fins)

Do not know why I drew this, probably to help get my ideas in order. 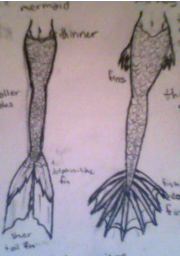 Some of you know Zostera, MH me, or as she's been more recently dubbed, Isolde White Cap (Isolde because I love the damn name, and White Cap because White Cap Bay is the home of the mermaids in On Stranger Tides). That outfit is very me (long scarf, off-shoulder sweater with hand-covering sleeves and a bodice, asymmetrical earrings, boots based on a pair I actually own and love to death, non-matching knee socks) The quotes off to the side got cut off. There were four: "A curious mind in a world of mysteries is eventually driven to insanity." "30 metres under and sinking." "I think my sub-concious is having a movie marathon." "Do not make me disembowel you with a crocheting hook. I just cleaned it." All said by me. Yes indeed, there is something wrong with me. The last one made even my friend look at me strangely. 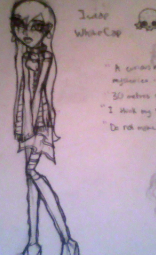 Some good intention shirt theft. This is a reason I have determined Army to be slightly klepto, because she stole her boyfriend's shirt. It says coiste bodhar, which means 'death coach' and is said to be the coach the Dullahan drives. Maybe it's a band in the MH-verse, you decide. Lesson learned: Do not leave Armena alone in a room. 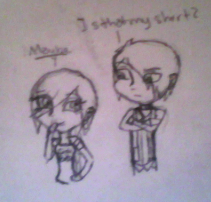 I've decided Armena and Dolan are a couple. Makes sense really, two people who annoy my other OC couple to no end (Maibe and Charles), end up together. They really are cute, though. My friend actually had to explain the unintentional pun to me, how the both of them are in training to escort the dead. I need to draw a group of all my Skulduggery Pleasant inspired OCs (so far, four, I think) 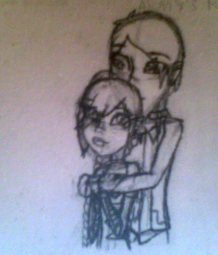 'Tis Armena. I've been drawing her quite a bit XD Her heels are meant to look like viking ships (not sure how it ended up). So, yeah. Arm guards, shin guards, some kick ass armoured boots, fingerless gloves, and a chainmail hoodie I wish I owned. Hope you enjoyed, and didn't find it mind-spewy like I did.

And then Valkryie drowned Edward. The End. :D

Nice work, by the way, especially love the myth of the Dullahan.

I knooow. And Dolan wears a lot of chainmail too XD (I blame all the representations of the Dullahan as a headless night)

Armena: Because the clothes gotta mimic the person ;)

Thanks. And the Dullahan interests me so much. And I've been doing more research on it to add to Dolan's character, then I remember that he's adopted XD Still doesn't top me from giving him a human spine belt.

Everyone must wear chainmail, it's epic~ XD

Ya welcome. Same, my friend introduced me to the legend to the the other day and I got hooked as soon as I read the first paragraph from the book she lended me.