Mattel: Celebrating those that wear their heart on their sleeves, the Wild Hearts Crew is a sisterhood of girls challenging everyone, everywhere to #DareToBeDifferent. Join the crew this July at @Walmart stores across the US! #WildHeartsCrew 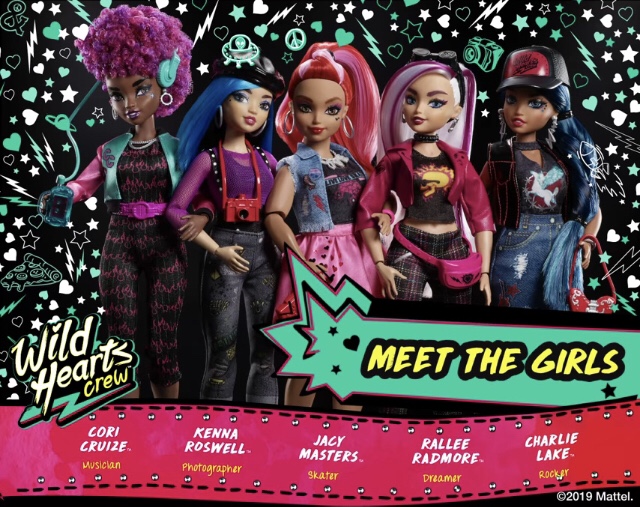 I am kinda meh on everything! lol

I wish I could see the Wild hearts Crew dolls in person but they haven't been released in Europe. I sort of like the LOL but not their price. They are cute but... Poopsies are huge so out of the question. The Descendants 3 dolls are nowhere to be seen. It is a bit bleak.

I am so uninspired, I buy crippled MH dolls in car boot sales hoping to fix them up!!

I think its a good thing, it saves me money. And its not like Im lacking in other dolls I want to get...

the new Descendants dolls are okay...I really like the new Uma and the deluxe Audrey is nice but I don't know if I'll get her.

The saving of money is going slowly in my neck of the woods, and my local Wally World has these dolls on a higher shelf; I was born with Draculaura's stature! Rats! LOL!

Seeing as how I've been writing my own personality profiles for these girls (aided by info. from online sources, including YT), I have to get them all! I have this funny feeling that the extremely intriguing Kenna will be my personal favorite! She analyzes things, and she believes in intelligent life on other planets, and she likes taking pictures! She's sort of a girl after my own heart, although Charlie shares my love of animals, and I'm totally into the past, just like Jacy. This entire crew has my name written all over it, because there's a unique trait that every single girl shares with me, in one way or another!

I seriously think that this is the doll line that we fans have been waiting for for awhile now, and I seriously hope that it doesn't melt away like a sugar stick in the way that the original SuperHero Girls did awhile back! I need to cross my fingers for this line's staying power (and think positively)!

<Disappears into a shadow, gathering her Retro and Sci-Fi memorabilia, and howling at the moon to honor this super new line of dolls>

Some listings for these dolls have been popping up occasionally on Amazon UK through their Global Store feature - I sadly missed out on Rallee but I managed to snag Kenna when she popped up. And she arrived ahead of schedule! 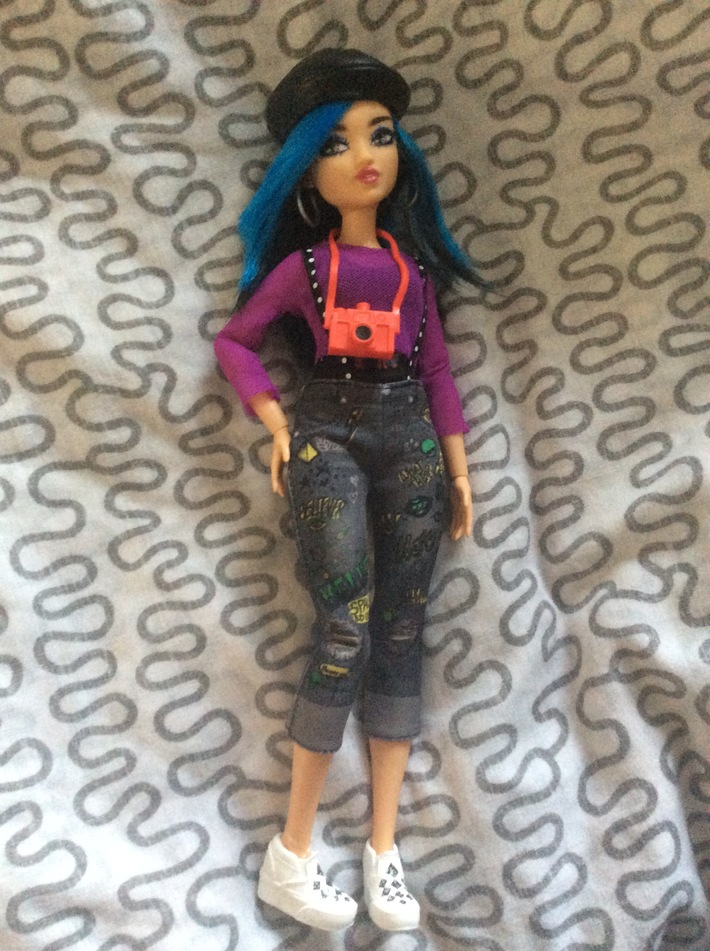 My full review of her is on my Flickr (nuBreannamation) but here are my summarized thoughts:

Unboxing was a dream - very easy to unbox, reminded me of classic Monster High boxes. The hat was a pain to remove (head ties). Her eyes are gorgeous and I love the screening, but her lips are printed a bit high and to the right. The hair quality is quite nice but not incredible. Despite the more choppy hairstyle, she has a full head of hair and it's well rooted.

Her outfit is all separate pieces and are made nicely. Her suspenders don't stay up very well, and her mesh top isn't hemmed at the sleeves or bottom, but I love the print on her jeans and the tank top. I would have liked actual cuffs on the jeans, and her shoes are quite basic.

Articulation is not perfect but definitely a step up from the dreaded 'gappy joints' that Mattel used to love. Everything pivots, bends, swivels and turns how it should, though I would have liked more motion in the elbows and wrists. The neck movement, however, is impeccable.

Overall this is a great quality doll - though I think Mattel has done better in the past, this is also the best they've done for a long time. And I'm in love with the designs so I'll try and get some more of these, if they pop up on Amazon again. Fingers crossed!

I still hope these are properly sold in the UK.

I saw them on amazon, well just this one. I actually ended up impulse buying Corey and Ralee on ebay for a similar price but ouch.. just.. ouch.

Of course that means they'll suddenly pop up in stores right? Lol. Now i've spent a lot getting the two I wanted.

Is the hair made of nylon? I know that I have an issue with that, but, to me, it's just sooo cheap and awful.

I'm not an expert on doll hair but it feels more like a polypropylene to me.

Did fair reviews of all of the wild hearts crew dolls on my you tube channel kimber's dolly talk show. The quality is quality is quite good.

I finally actually looked through these dolls in Wal*Mart tonight, and I am so disgusted that I can't even believe it!  :(

The following was the rough selection....and the glaring flaws that greeted me as I stood on the lowest shelf, using my hands and Surprise Harry Potter Wands to pull the boxes toward me (I hate to ask for help in any store, so I rarely do so!):

Rallee: Maybe 5, or so / Weirdly-shaped and weirdly-positioned eyes, weird mouth (One example looked like a CARTOON CHICKEN'S BEAK from a head-on position! I mean, like, what was going on with that doll?)

Cori: 4 / Her eyes looked very weird, with regard to the way that her irises looked, and her teeth were positioned really strangely

Charlie: 2 / They both had sort of strange-looking eyes, and one had a weird-looking mouth

Kenna: 2 / Oh, my poor Kenna! Both dolls had oddly-shaped mouths, and both had really unevenly-shaped eyes that looked super strange!

The quality control has officially left the building, Mattel, and I left the register line at Wal*Mart twice, thinking that I might just go back and exchange my MtM Basketball Player (TALL) for one of the Wild Hearts Crew girls, but I just couldn't justify those kinds of bad facial screenings for $16.00 a pop, when the MtM doll's only real flaw was slightly thin hair.

Now, I may still cave when next I hit the doll isle at Wal*Mart, but, until there are better examples of these dolls on one shelf, I really, really don't want to cave! I really want to write a bad-ass rant to Mattel, although I know that whomever receives it is just gonna use it to polish the hooey out of ole' Greased Lightnin' in their garage at home, instead of doing squat for us actual doll fans!

Sorry to bring along a rain cloud, but I have had it up to my eyebrows with cheap-ass dolls and nonexistent quality control! We all deserve much, much better, even in these modern times! If Mattel sinks to the level of the company that made that Dora doll, I'm turning off the light and leaving the room! I mean, I was somehow able to find good Monster High dolls back in the day, and those could look pretty jacked up on a lot of occasions! Times are bad for dolls / doll fans!

<Disappears into a shadow, growling softly>

Oh, and more about the flaws, just in case you want a more explicit description:

* There were dolls with one eye that looked round, while the other was a lot more almond-shaped.

* There were dolls with two irises of different shapes.

* One Rallee had white paint all over part of one of her eyebrows!

It was as though someone had deliberately populated that one shelf with the most extreme examples of weird-looking dolls, in order to create a viral meme, or whatever, just for laughs! It's like the levels of weirdness weren't even within the realm of believability, as far as doll-related facial feature realism is concerned. I was absolutely floored! Mattel's promo / box images are a blatant lie! They're not just examples of false advertising; they're an absolute flippin' fairy tale!

The WHC dolls quality sounds terrible but I have read Breanna's review and it was not bad at all. I just would love to see them in our shops...