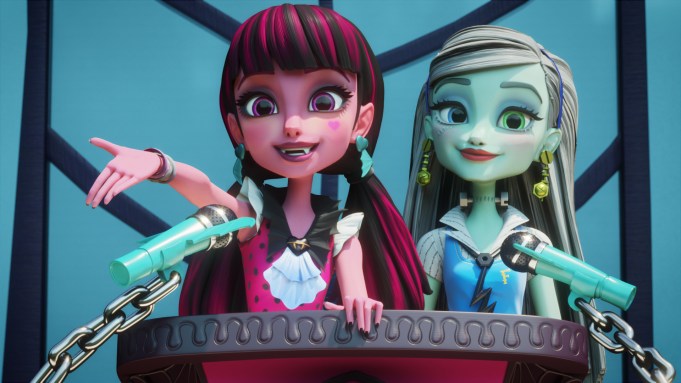 EXCLUSIVE: Monster High, the ghoulish toy line, is getting another stab at television with a new animated series and the franchise’s first live-action project.

Nickelodeon and Mattel have teamed up on two projects featuring the Clawdeen Wolf, Draculaura and Frankie Stein characters.

The ViacomCBS-owned network will premiere the two projects in 2022.

The animated series will follow the characters as they navigate the hilarity of high school in the hallowed halls of Monster High. It will be showrun by Shea Fontana, who has worked on DC Superhero Girls. Claudia Spinelli, SVP Animation Development,  is overseeing the project for Nickelodeon, and Christopher Keenan, SVP Content Development, is overseeing for Mattel.

A slew of Monster High animated episodes, including specials, have been produced starting in 2010 with a handful of specials airing on Nickelodeon.

On the live-action side, Jenny Jaffe, who wrote on the Big Hero 6 TV series and is working on the new version of Rugrats, will write a TV movie musical event alongside Greg Erb and Jason Oremland (Princess and the Frog). Production on the Monster High movie is being overseen by Nickelodeon’s SVP Live-Action Zack Olin and SVP Live-Action Scripted Content Shauna Phelan. Mattel exec producer Adam Bonnett is also working across both.

“These classic monsters have always captured kids’ imaginations and we are so excited and proud to welcome Monster High to our brand for a new generation of kids,” said Ramsey Naito, President of Nickelodeon Animation. “We have terrific partners on board at Mattel to create original content in different formats, and, with the expertise of the Nick creative team helmed by Claudia Spinelli on the animation development side, and Zack Olin and Shauna Phelan on the live-action side, we can’t wait to showcase the comedy and adventure of these characters as they defy expectations and take on the world.”

“Monster High’s strong message of inclusivity is more relevant than ever,” said Fred Soulie, General Manager, Mattel Television. “Nickelodeon shares our passion for the brand and its purpose having worked on the franchise when it first launched more than a decade ago. They are the ideal partners to bring these beloved characters and their stories to life through episodic television and the live-action television movie.”

“We could not be more excited to work with Ramsey, Claudia, Zack, Shauna, our writers and the entire Nickelodeon animation and live-action teams to introduce Monster High to a new audience,” added Mattel’s Bonnet. “This property has always resonated deeply with fans and our reimagination of the franchise will focus on addressing important themes of identity and empowerment for kids today.”

Thats exciting! Mattels quality has gone down so much, so I'm nervous about new dolls

I'm so very excited! I can see the live action being along the same feel as the descendants or zombies movies over on disney channel. Though I do have concerns, for example, Nickelodeon took over Winx Club back in 2012 and treated it like dirt. They left winx on long hiatuses, never advertised new episodes, or sometimes advertised new episodes and then they never aired. Nickelodeon's treatment of Winx really dimmed the doll and toy side of things. Hopefully this'll be better though!

I'm honestly just super excited to see the ghouls back in any capacity! Yay!!

I am so beyond excited for this.

I am not a fan of live action. I thought Descendants movies were a bit crappy but it is only my personal opinion of course.

I wonder what it will mean in terms of dolls. 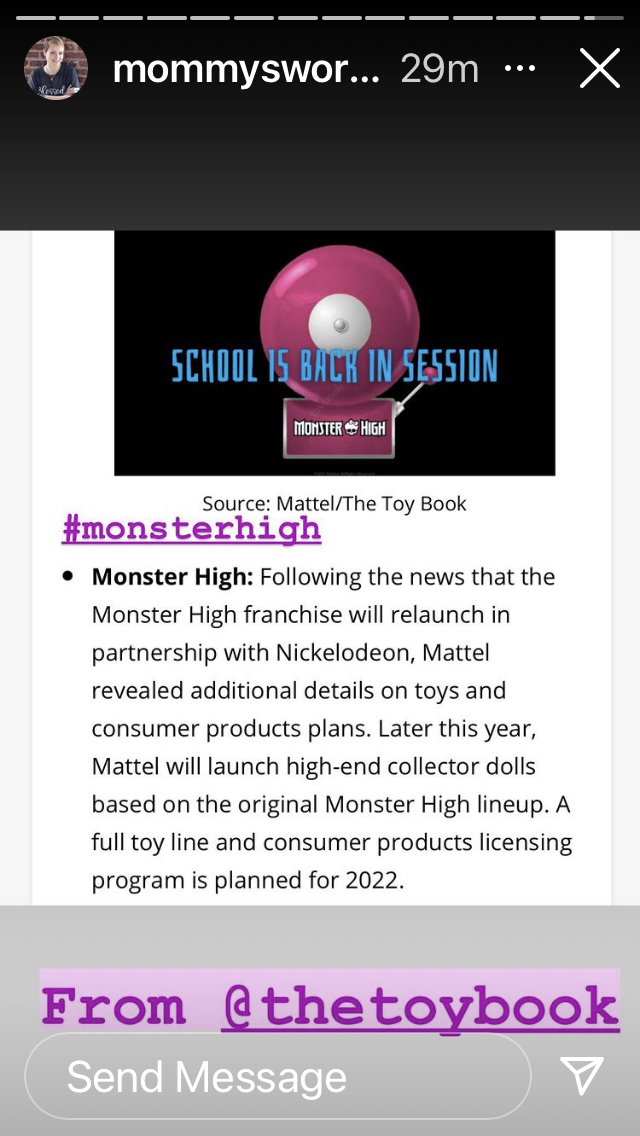 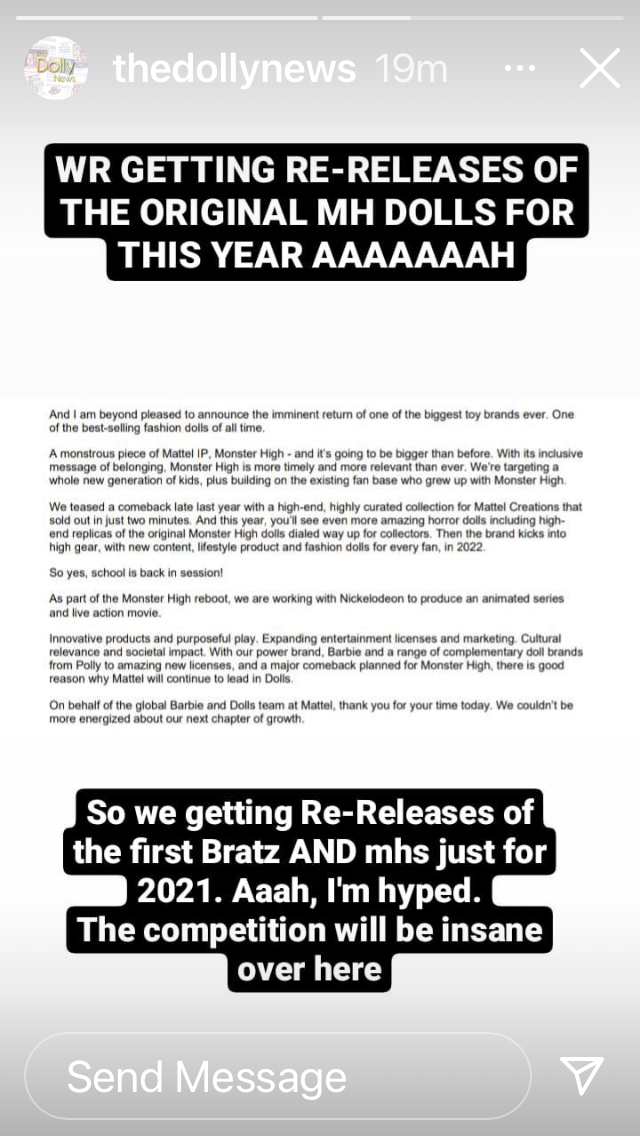 Oh gosh, this is so exciting. Does anyone know if it's re-releases of the original ghouls for stores, or is it collectors like the IT doll? I'm hoping store, because the availability of those skullector dolls...yikes.

Yes, it is a shame abour the Skullector dolls. Too difficult to buy if people live in Europe. It is always the same. It would be nice to find them in stores.

I'm trying to be hopeful about this. Nick tends to do decent cartoons and live action so fingers crossed.

I just don't trust Mattel with their recent track record of gross frizzy poly hair, grainy printed faces, half print sack outfits and questionable decisions (like why they invested money in the stupid plastic animals that come with the Barbie extra dolls rather than giving them decent hair and non grainy faces. WHY? Why was a hollow poorly made plastic dog considered a viable use of the budget?)

But with MGA having a bit of a stranglehold over the industry right now with OMG and Rainbow High (along with the Bratz relaunch) i'm hoping Mattel feels the fire on their butts and starts pulling out all the stops to produce something GOOD again.

and if they do collector line dolls I expect them to be the same level of detail as collector Draculaura, not those glorified overpriced playline dolls they called "collector" afterwards. NO. Go big or go home. 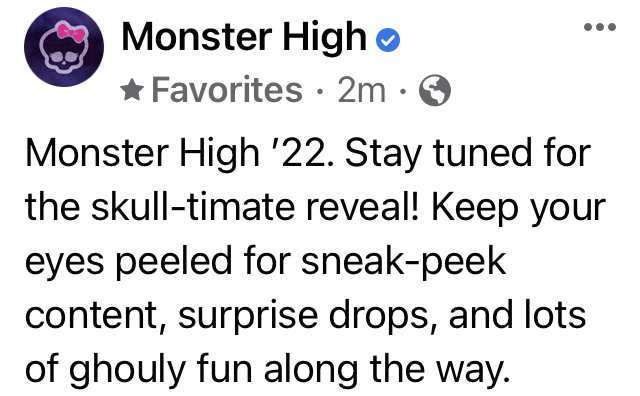 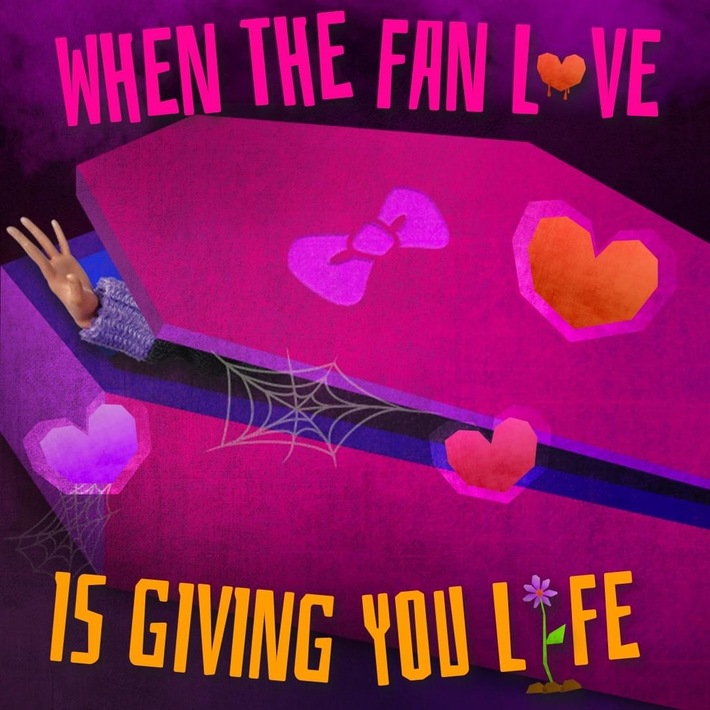 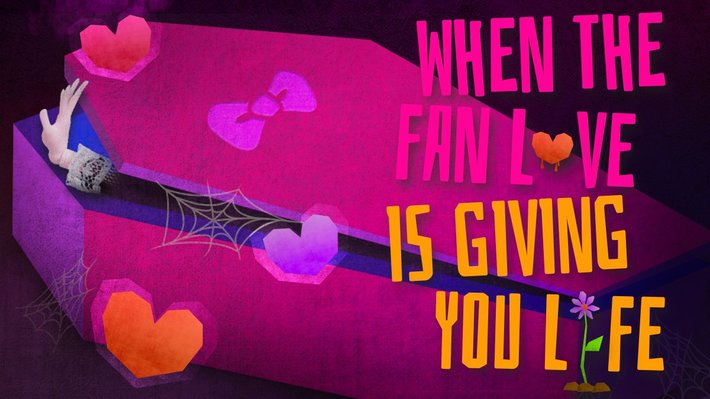 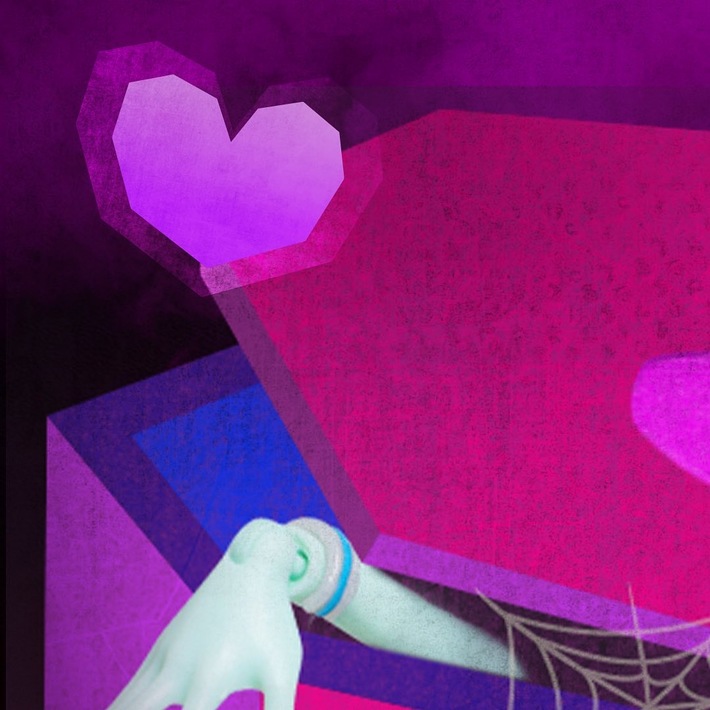 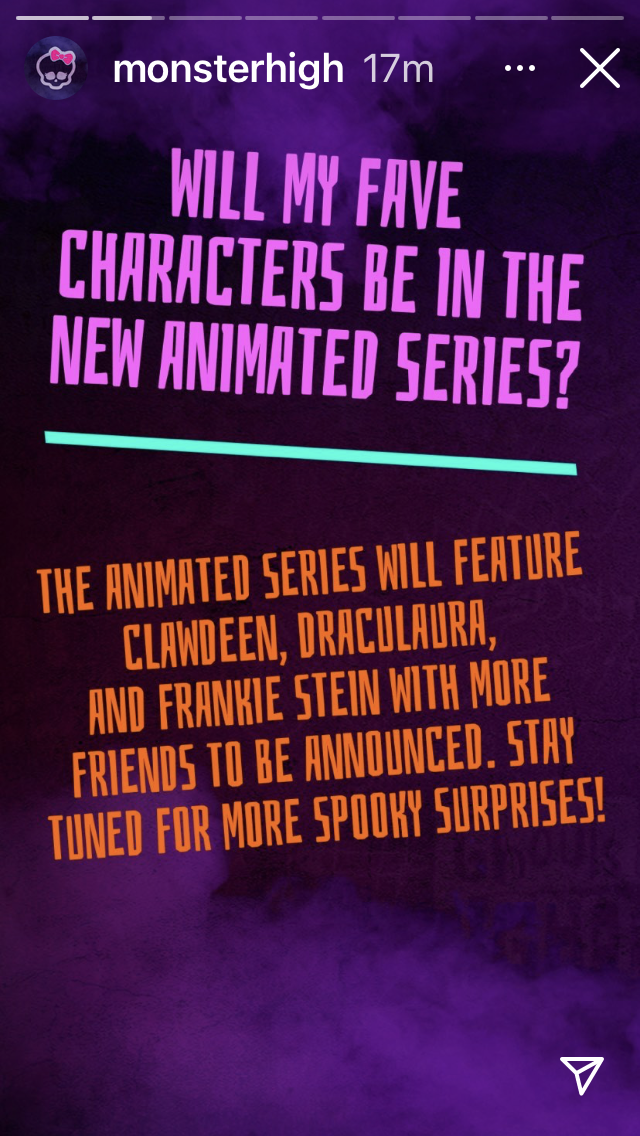 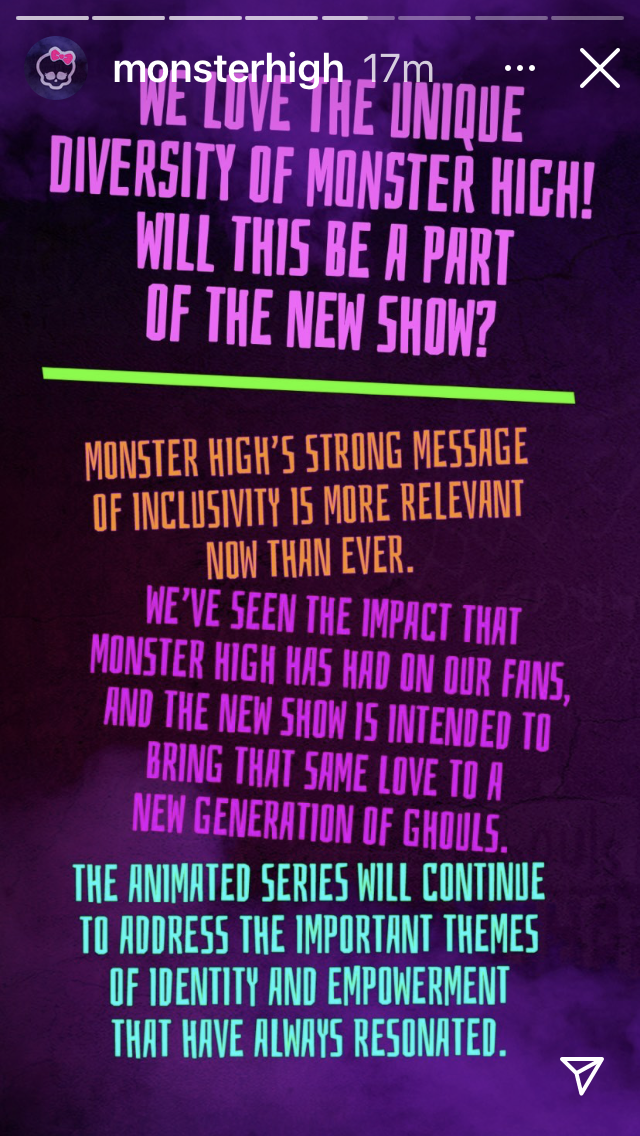 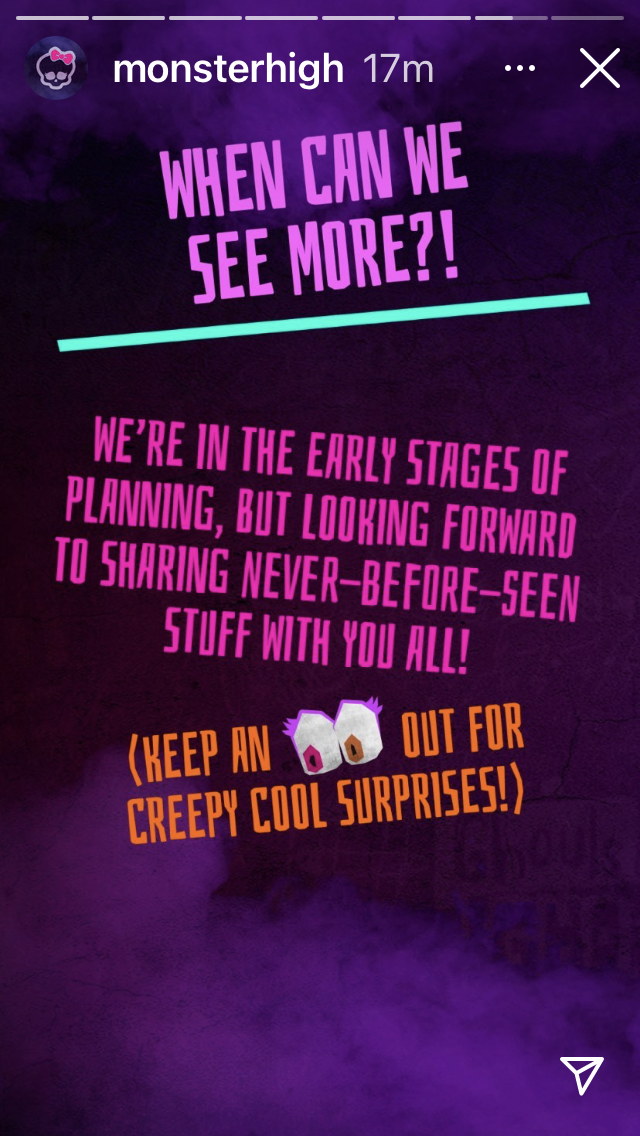 Is anyone able to change the featured discussion and replace the 2016 thread to this one?

Permalink Reply by mechagirl on Tuesday

I just want affordable but well made re-releases of the original lineup: the main six plus maybe some others like Abbey, Spectra Operetta, Torelei, etc. B/C most of my original release boxed dolls have become damaged due of the ton of glue thats dripped onto the hair. And b/c of that many of the paler white colored dolls have also turned yellow. >:(

don't really care what they do with the rest.  I don't really trust Mattel  these days, they'll probably botch it like they did that 2nd gen reboot.