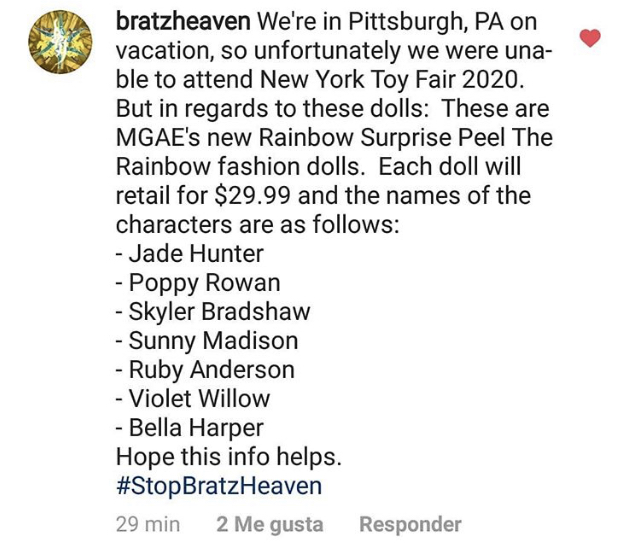 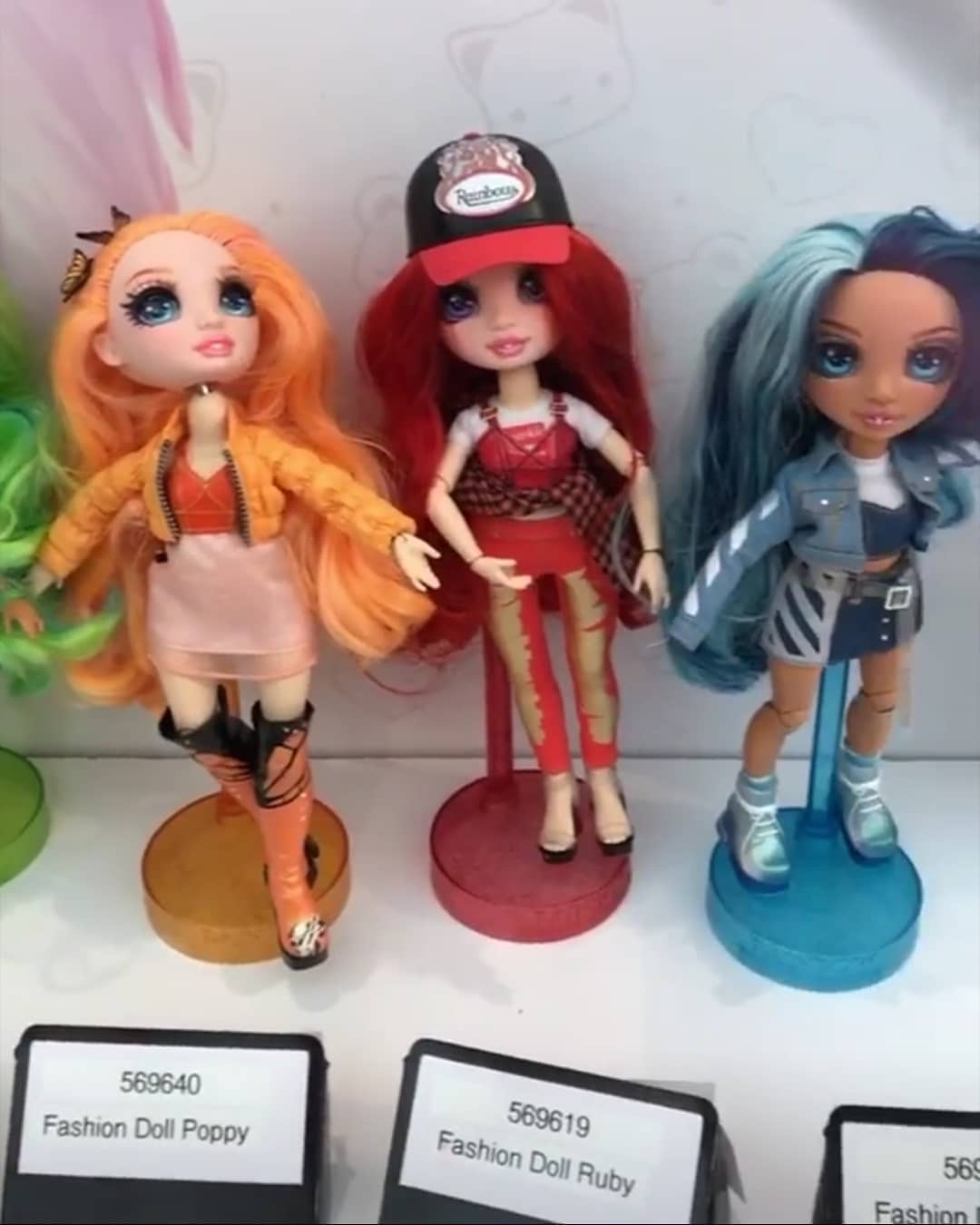 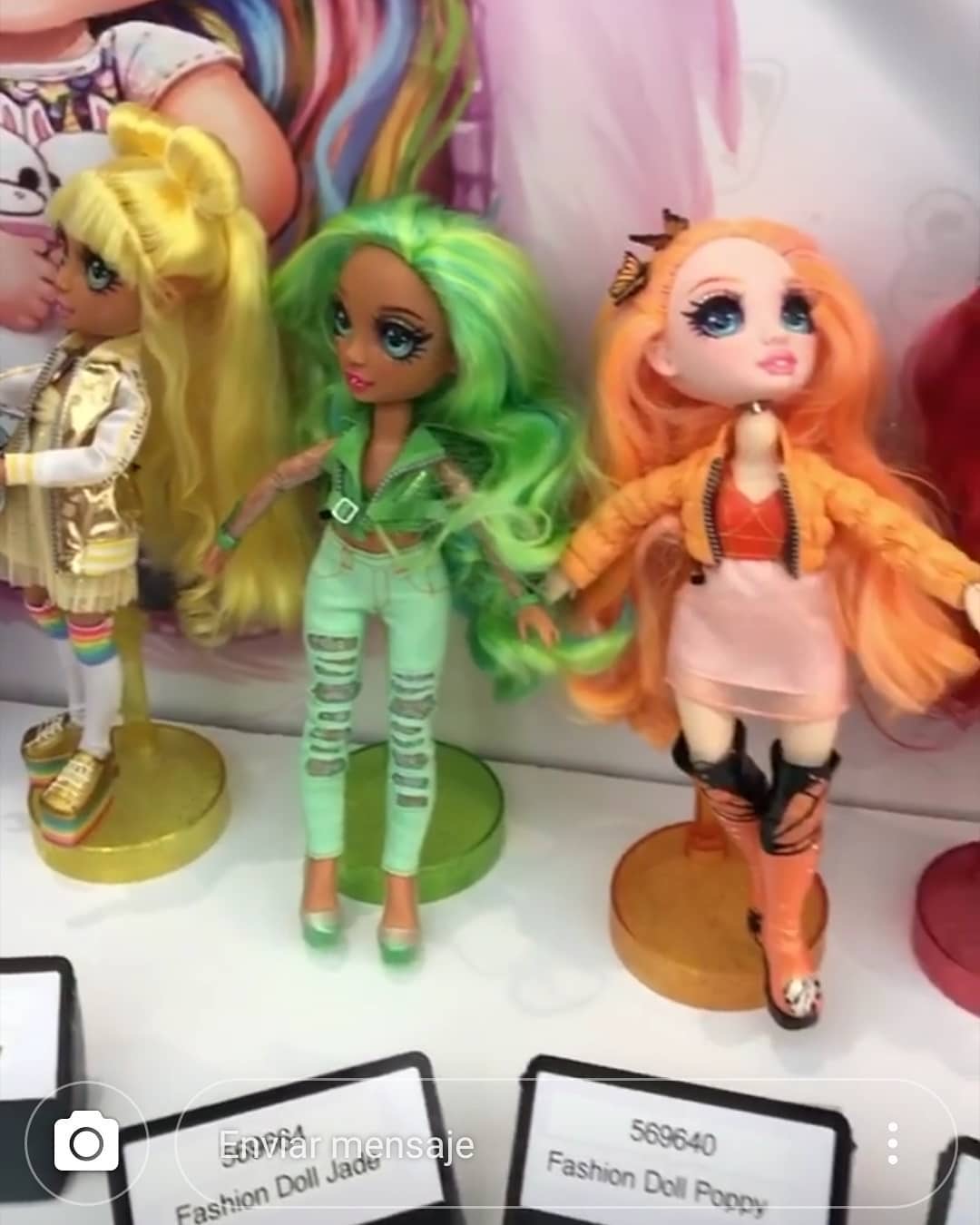 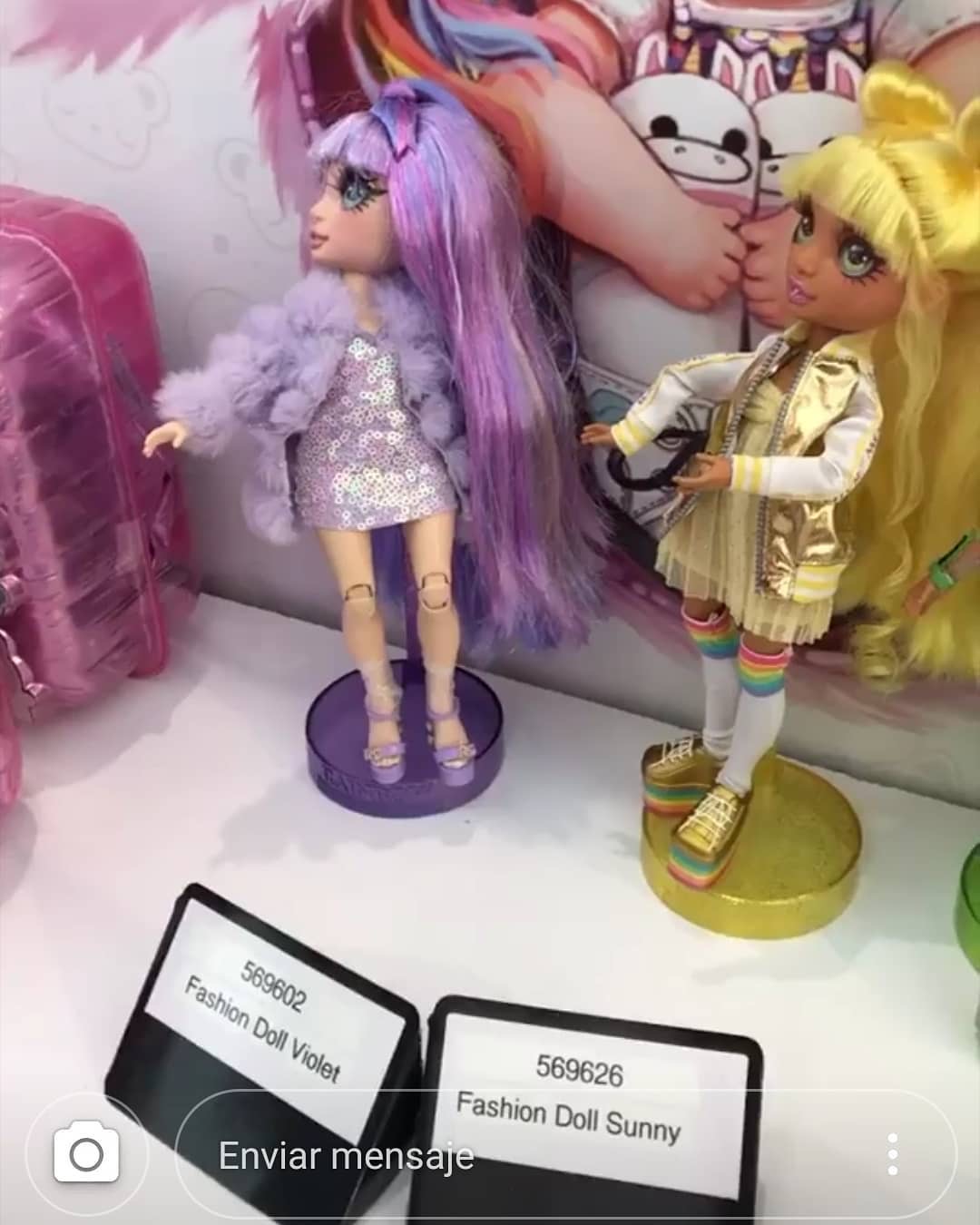 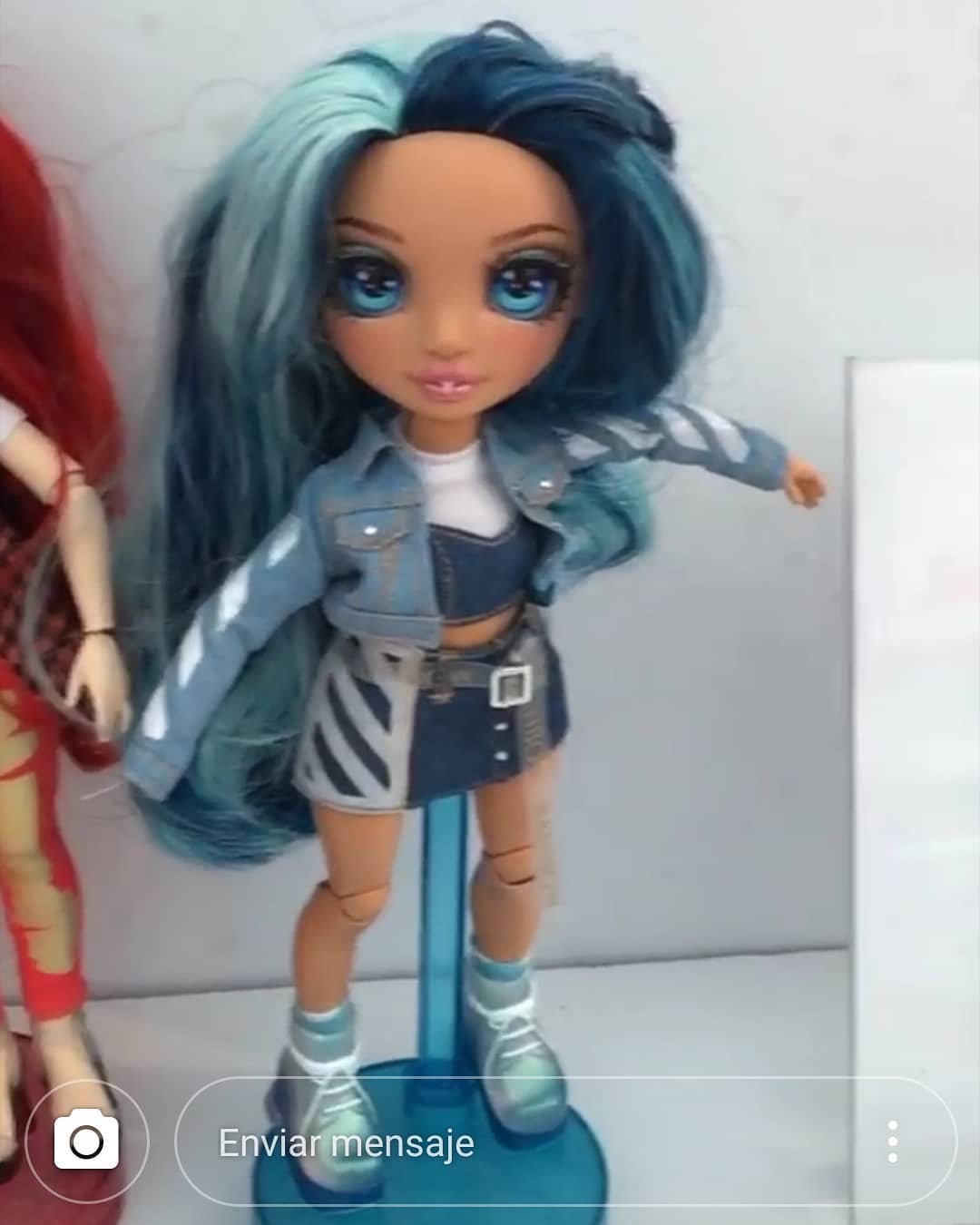 We have stock photos!

i'm disappointed they changed green. She's been whitewashed and is now dressed like Billi Eilish and I can't say I think it's a good look. 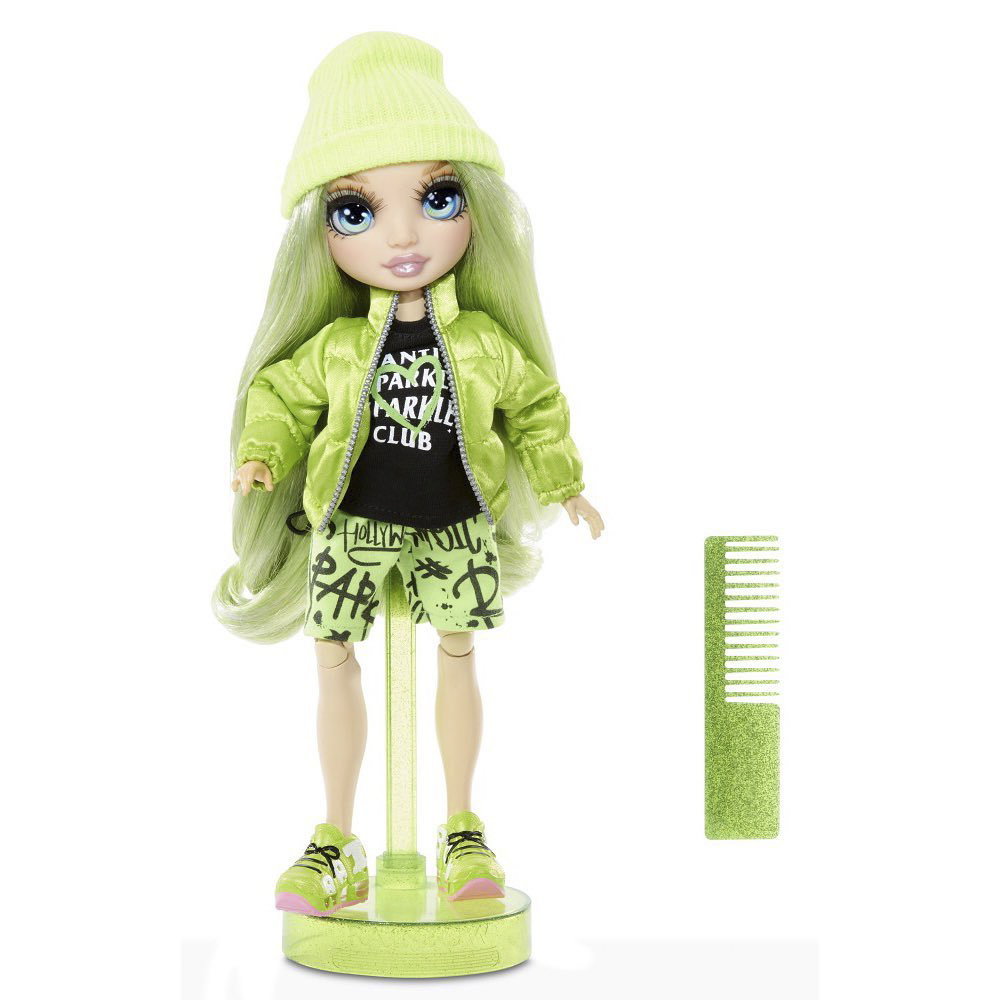 Permalink Reply by mechagirl on Monday

shes actually my favorite, heh, I like the dark skin girl with yellow hair too,

Permalink Reply by The Whispering Wolf on Tuesday
Hello, Monkfish,

Thank you for the update. This site is still giving me fits (I can't log out....or use italics), so this reply may look weird, but here are my opinions about the actual dolls:

RUBY ANDERSON: For some reason, all of that plaid, and the color red....are giving me strong Dorothy Gale vibes. Then again, I am listening to music from "Return to OZ" right now. LOL!

POPPY ROWAN: Go ahead and call me a prude, but....um....the upskirt photographers in the club are going to have a freakin' HAYDAY, and, in my opinion, that skirt color looks hideous, anyhow.

SUNNY MADISON: Rapunzel vibes, and I like her! Awesome, sunny banana hues, and awesome hairstyle, and, FINALLY, a darker skin tone.

JADE HUNTER: They just HAD to combine names from the BRATZ and the Ever After High lines, DIDN'T they? I am SO over the over-use of certain names, and I am not lovin' the overall color scheme for this girl's clothing, either.

SKYLER BRADSHAW: Once again, I've heard both of these names too much....("Sex and the City" says, "Hi!", even though I never watched it), and, overall, the doll isn't TOO much to write home about, but all of those blues look good against a darker skin tone, and she's pretty.

VIOLET WILLOW: Too-common names again, and she has an extremely wide-eyed, stupid look on her face. She looks to me like a stereotype of the naive as heck, "heart of gold" rich girl who's gonna be taken by the first thief in town. Also, Georgette from "Oliver and Company" says, "Hi!". LOL!

AVERY STYLES: Yeah, yeah. We GET it. "Every styles". Ha ha. Very funny. Now, the DOLL, I'm not crazy about, but the boots and the hair accessories and the WIG? WANT!

OVERALL: I want Rainbow Raine the MOST!

I'm really curious if there's some theme or meaning behind the second names. Like.. Rowan and Willow are both trees but then you have the others which... aren't.

Sunny is my favourite. She's adorable and she has rainbow platforms!

I quite like Poppy as well. I mean her skirt is pretty meh but she has monarch butterflies on her and I have a real soft spot for monarchs, I used to raise them as a kid. I also like the colour orange heh, it's not often seen in "girls" toys because toy companies think it's too maculine or some nonsense and I like to see it.

Ruby is pretty but she also looks a lot like one of the WWE wrestlers and I can't unsee that now someone mentioned it hahaha.

She's husband's fave and I understand why. She's right up his alley. Red hair and a tomboyish skater chic outfit.

I don't like the green one's outfit. I get that it's Billi Eilish but honestly I don't like her fashion sense either. It's very much "I rummaged through the rack at goodwill and grabbed the first three things I found regardless of whether they fit" sort of look and you know, fair play to her for having a "look" but personally it does nothing for me.

the anti sparkle sparkle club shirt is funny though. Maybe with some better fitting pants (maybe some jeans would be cute?) she could be cute but meh. The neon green hair doesn't pop as well against the pale skin as it did with the prototype's darker tone anyway.

Skylar has a nice cohesive look but for whatever reason she doesn't WOW me. I dunno why. I mean I like her two toned hair but I think she's just a bit too safe? for me. I get the feeling she'll be popular though.

Violet, I mean purple, I love purple and I think she has some sparkly tinselly stuff in there but I do NOT like the whole "glam" outfit. I never like the hollywood glam outfits on dolls, not my taste. She's another who'd be cute redressed. I also feel like she hasn't got enough contrast in her outfit. It's all the same colour and shade which is a bit bland.

Rainbow Raine is gorgeous, I like her outfit too. See, contrast! The flash of rainbow in the otherwise white hair, the black trim on her white outfit and the black boots. It's a nice design.

I have zero interest in the hair play aspect but I like the doll.

Avery is cute but her price point is gonna hurt. I like the extra outfits, there's some fun looking bits in there and I like that she's darker skinned (MGA loves to crow about how diverse their lines are but this line is VERY white and they all have blue or purple eyes except Sunny who's eyes are green, that's not really diverse) but i'm not 100% sure about wigs because MGA has honestly never been able to do really nice quality wigs. It'll have a bulky plastic wig cap in it and I feel like the dolls deserve better than that.

but oh my god those knee high rainbow boots. I want em!

Overall, I think i'll get Sunny first and see how I feel. If I like em then i'll also get Poppy and maybe fork out for Rainbow Raine.

I hope they're using good quality pleather and vinyl for these outfits so they don't just turn to dust in a few years though.

They are great. I love them. At least, we can see them if they all come in a box like the one pictured. It is an improvement on the omgs.

I wonder if there will be a craze about them like for the omgs. I find the omgs craze exhausting! lol

They will be £30 in the UK. It is becoming very expensive to collect dolls...

Permalink Reply by C on Friday 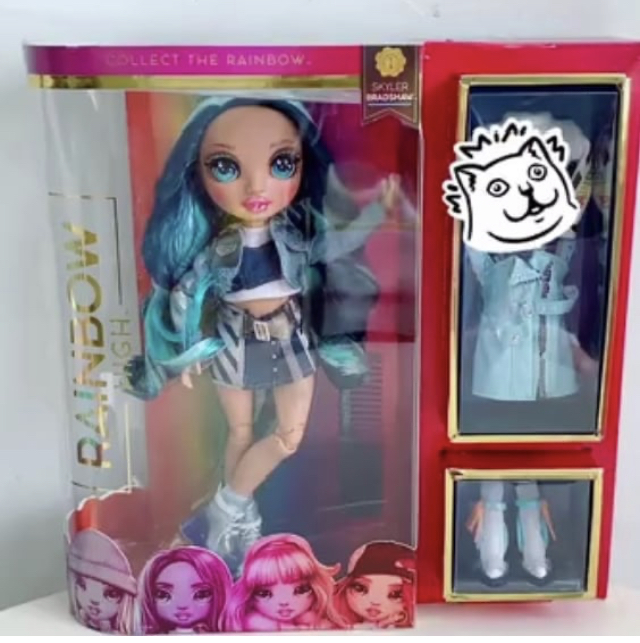