So restock is upon us... almost... which means a lot of new stuff should be hitting.

Comic con is also coming up which means MORE reveals.

the Mattel BTS dolls have been given a release date

Capsule Chix are starting to hit and so is new LOL.

Hairdorables series 3 is supposed to be hitting but the boys have mystereously vanished from amazon and smyths which is concerning. Do you think they've been cancelled?

I hope not, I was looking forward to them. 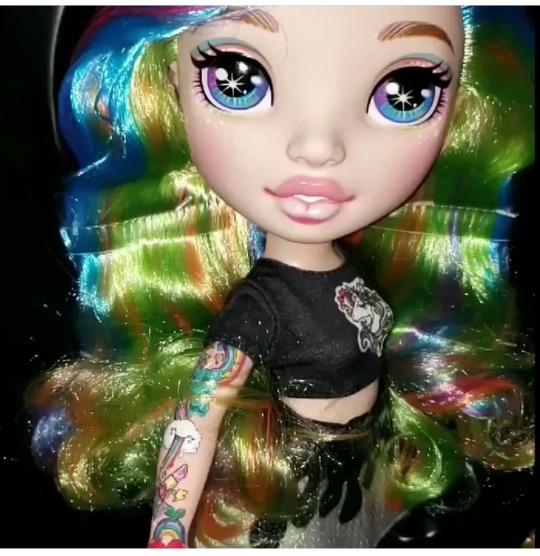 She's ENORMOUS and beautiful and you put slime in her clothes, she doesn't poop it thank goodness.

They're gonna be EXPENSIVE though.

Amazon have revived TRU's Journey Girl line too which is cool.

What else? And what are you planning to pick up?

Yes I've noticed that about the Hiardorables sets with the boys which your right it doesn't look good, I thought it means that the UK are not getting them which would be really disappointing out of all the new ones coming they were the ones I was most excited about and if that is the case I might not even bother with wave 3, I have no interesting the little sisters what so ever they are lame and babyish, but I hope that we will get the sets even if it's later on but I'm not too sure sadly.

and the Poopsie slime surprise fashion dolls are an eye gouging 50 ouch!!!

There's also She Ra! dolls by Mattel they have hit the US I believe doubt the UK will get them though I must be honest they don't really look that great just the same typical Mattel type dolls, I do like the boy and the demon girl but the whole super hero/action hero lines have served their purpose if DC Super Hero Girls and Forces Of Destiny are anything to go by.

The Poopsie doll is pretty but if she is enormous, it is a no for me. I have no space.

The Hasbro Disney Princesses are a huge improvement! lol They look so much better, it is uncanny!

I will have to wait and see. I don't have any Hairdorables and I am not really planning to add any to my collection especially if I can't see what I buy. I might buy a LOL OMG doll despite the too high price. They are really cool but really too expensive. I would like to see the Descendants 3 dolls, I might be tempted to buy one. I will carry on buying second hand things. I feel quite uninspired since Monster High disappeared from the shelves, and Project MC2.

Omg those disney dolls ARE nice. No molded clothing!

The xmen dolls look to be a gamestop exclusive or something? It's wierd.

I intend to grab a couple of LOL OMG and maybe one capsule Chix out of curiosity because their teensy articulation interests me. They remind me of the teeny pose skeletons I have.

I'm actually surprised by how much LOL stuff is coming out. So many stores in the UK have really reduced their displays of LOL, I really do think the bubble has burst there.

but I suppose time will tell. New argos catalogue is soon.

I don't like any of these :c but I may get a big version of candylocks to try out

The X-Men dolls look real nice for once. No more Barbie dress up as an super hero.

The X-men dolls look amazing! I'm trying to cut back on dolls as my family is getting on my case of having too many already, but ugh I'm so tempted! If they make Jubilee I will def get her!

I saw a blurry leak promo of those Disney Hasbro dolls a while back, I thought they had been cancelled! I like that they posable and i like Ariel's dress. Ive been trying to get some of the Wreck it Ralph Comfy Princess dolls to get some posable Hasbro princesses but I don't like most of the face paints on those. I wish they'd stop doing the real eyelashes thing, I hate how it looks on dolls.

We'll also be getting new Frozen dolls for the sequel coming out, but Ive seen a leak of some of the Hasbro dolls and they look like the cheapest crap! Hopefully the Disney Store ones will be better.

There's new Descendants dolls now too, they're okay but their order ones where so much better looking.These have that awful "everything is printed on the fabric" deal that's become the popular new way to cut costs and I hate it! Its almost as bad as everything being molded on!

Oh wow! dang doll diet which is the name of the rainbow hair girl with the huge eyes and tatoos?

Doll-wise I really want to see the Descendants 3 dolls out over here - the new Mal looks much more like Dove Cameron than the old one did, and the aesthetic is really appealing to me - let's hope the distribution is better. I'm still waiting for those Ralph Breaks the Internet Princess dolls - did they never come out in the UK? But my #1 want is Wild Hearts Crew - I'll riot if we don't get those in the UK.

we really never got the Ralph Breaks The Internet oddly enough, and I really don't think that we ever will cause they had just been discontinued in the US, I think they were Target Exclusives I was lucky enough to get a some from my Sister who went to Orlando with her boyfriend but they didn't have the 3 I really wanted but I can't complain cause they were a gift and I at least got some good ones.

I'm not too sure we will get Descendants 3 we barley hardly really got Descendants 2 dolls fully I'm afraid that might be the case, I'm only really after Celia and Dizzy but they will be so difficult to find.

https://www.amazon.co.uk/Poopsie-561118-Rainbow-Surprise-Dolls/dp/B... Amazon listing for two of the raindom surprise dolls (the slime dolls)

There looks to be an open and closed mouth mold, ooo.

they're gorgeous but £50 is insane for a doll that can't even bend their damn elbows or knees.

also wierdly, Smyths have the other two listed. Looks like they come in two sets, either the blue and purple ones (so 50/50 chance?) or the pink and rainbow.

I wish they had articulation, then I might be able to justify the price tag but the slime gimmick is bizarre. Slime in clothes? What?

FARTA. LA CACA. I can not believe people buy these for their children ahhaha