A bona fide pop culture phenomenon and a massive global franchise in over 60 countries Monster High is ranked as the third biggest fashion doll brand a $1 billion franchise annually and a top 5 global property for girls! Monster High empowers girls to express their individuality and form friendships that last beyond a lifetime.

Now entering its 6th year in the market, in 2016 the brand will embark on an exciting new chapter to maintain its relevance to the ever changing consumer. As an exciting disruptive everygreen brand Monster High will continue to represent via the monster metaphor what it means to be different, unique and empowering girls to be themselves as Mattel leads the way in creating, maintaining and driving strong girl empowerment brands.

The key elements that make the brand disruptive will remain but now infused with more play in the product whilst adding renewed focus on the core characters and stories as well as marketing what the brand stands for. The brand will have a fresh new look with new contemporary colours and graphics whilst still incorporating the iconic signatures that make the brand unique and relatable to the core audience of 6-10 year olds. The fresh new feel will also incorporate new photo real brand imagery creating the emotional connection with the core audience whilst maintaining the brands humour and relatability and sense of community. The brand will also launch an exciting new multiyear brand campaign and new consumer rallying cry “How Do You Boo” encouraging consumers to embrace what makes them unique and share how they Boo. Working with celebrities and brands spokespeople the campaign will communicate what it means to boo, to be yourself and start a movement encourage girls to do the same. This will also be brought to life through an empowering new Monster High Anthem launched through a music video that will be amplified through social media and PR. This will be supported with an extensive marketing campaign across multiply touch points and will be localised in key countries across the EuRoMEA region.

Entertainment will still be a key focus with the successful tentpoles as Monster High is ranked #2 children’s direct to video franchise. In Spring, join favourite ghoulfriends of Monster High in an all-new aquatic adventure, Great Scarrier Reef (70 minutes). In Fall fans will be treated to the untold origins story of Monster High and the Monsters that live among us (70 minutes).

Permalink Reply by Quimbear on February 28, 2017 at 6:20pm
Thank you! Finally some action was taken

"Why is the Venus on the previous page the same as Electrified Venus? And why are we getting another Venus from the same snap-in flower line?"

The Venus on the previous page is not Electrified Venus and we're not getting another Venus from the same snap-in line flower line. It's just a box titled Party Bouquet instead of Party Ghoul.

i'm still mad they keep releasing venus with that horrible body. Her face wasn't bad, a little more doe eyed than he original releases but not hugely different (not like Draculaura and Frankie who really have become totally unrecognisable imo) but that body... we've had what, 3 different venus dolls released in the reboot so far? they ALL have this ruined body.

And Mattel don't want to hear feedback about it because I sincerely believe they know full well it's poorly constructed and simply don't care. I think they know the brand's circling the drain, so can't see any point in keeping fans or improving things or putting any money into it.

they still haven't replied to my email, they're never going to. It's mean and i'm still feeling down about it. Send bloody cops then don't say sorry, jerks. Eugh. They could have at least acknowledged that their product was awful but nope.

Very shortsighted of Mattel. I was thinking about this the other day and how brands die, like... this whole static body/gimmick overload/reboot thing is very very common for a line that's on the brink of death, but, that said, there are companies who know when to bow out gracefully and don't do this death spiral thing.

MGA for instance. Sales of Bratz slumped so what'd they do? they just stopped. No gimmicks, no static bodies, heck, their last release had MORE articulation than the standard dolls.

Bratzillaz last wave was the best of the four lines they did.

Moxie Teenz were really nice right up to the end too.

It's like, MGA know when it's time to just walk away and say "nope, didn't work, okay we tried" but Mattel? Hasbro? Spinmaster? they don't know when to stop and so we get these insane death spirals where they throw all this bizzare stupid at the wall and see what sticks, and most of the time, nothing does. All it does is drop sales further. Surely it'd be cheaper to just bow out gracefully? But no, it's like they have to run a franchise into the ground completely before they can accept it's dead. I don't understand that reasoning, it's bizarre to me.

Also, random question but, can anyone recall offhand a g2 reboot that's actually WORKED? Because I was thinking about this. MLP g2 is absolutely loathed by collectors but g3 and 4 are really popular. Bratz 10/10/10 reboot (g2) was an absolute disaster and really poorly handled but their more recent release, though it failed, wasn't because the product wasn't good (they were really well made dolls) but because culture change has made the very concept of Bratz kinda redundant.

one could argue that "smirky" sindy was g2 reboot, and she's also very very unpopular. Pedigree tried one last ditch effort to salvage the brand, rebooted, changed literally everything and it backfired horribly. Then hasbro bought them out and had over a decade of success. Even vivid was relatively successful with the brand.

So, aside from those cases where g1 was like 30+ years ago and the g2 reboot is a nostelgia-boot (like thundercats, thunderbirds, dangermouse tv shows etc) have any toy franchises actually had a successful second generation? Or is first reboot always cursed? 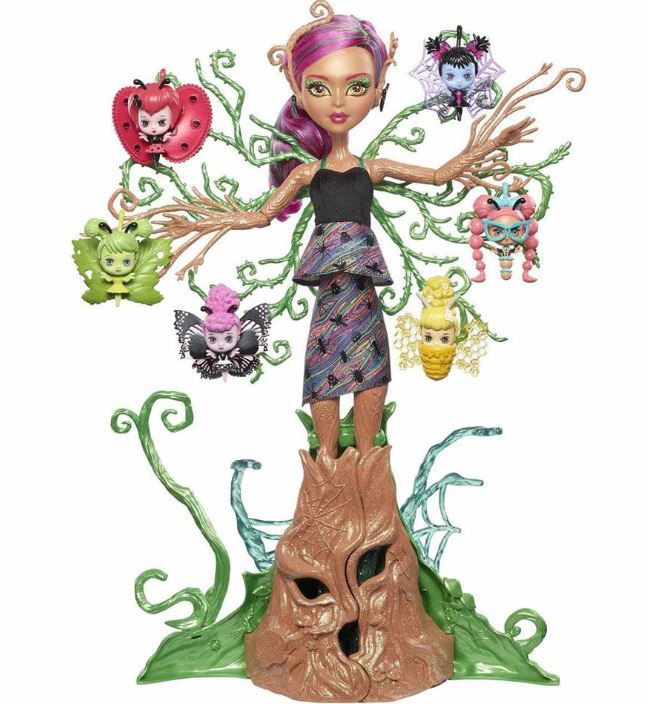 Yikes! Could she possibly be more lame, cheap & gimmicky? This is just as bad as some of the worst stuff from Ever After High.

She has a pretty face but her twiggy arms are gonna be a pain and that stand is just plastic tat and those baby.. things all over her? wth even is that?

Too cutesy and wooooow her outfit is sooooo boring like omg.

Ditch the stand, ditch the little butterfly things and give her a better outfit and I think she could be interesting but why the hell is her hair purple is she's a tree? Shouldn't it be like.. browns, greens, maybe even reds, oranges and yellows? purple just... wha? I mean some tress are purple I guess but it feels pretty random and just pinkification for the sake of it.

I feel like if you trimmed down those arm tendrils (they'd look better I think on her upper arms but eh) and gave her a better outfit and rerooted her with some natural planty tones she could be cool but yeaaaah... she doesn't look at all monster high, she really looks like an idea they ported over from eah.

Like those Enchantamals which are just the eah pixies repackaged.

In fact, I wonder if a lot of hte reboot MH is in fact EAH concepts repackaged. Because there's like.. nothing spooky in this doll at all.

Permalink Reply by Quimbear on March 2, 2017 at 12:29pm
Love Treesa! I'll remove all the gimmick stuff for sure but shes cute

The bottom part looks like a giant turd and she stepped in it and is now sinking inside. She's truly disastrous & hideous. The outfit is ultracheap and the colors are way off base and make no sense at all. Even 5 yo kids won't like her.

I don't know if she is sinking inside a giant turd but it is definitely not the greatest design!!! The whole thing is a bit heartbreaking for me as an adult collector. They definitely have changed their consumer target. It is a shame. They could have done something interesting with this theme in the old days. At least her face is decent. I feel sorry for Garrett Sander, he must be devastated seeing what they are doing to Monster High.

I think she's kinda neat...dont like the cutesy plastic critter things you hang on her &I agree her hair color is all wrong. But I love the idea of a tree girl. I think she'll probably be too big and too expensive for me though.

Permalink Reply by PlagueRat on March 2, 2017 at 3:01pm
Jeez!! That's awful. What the heck is she wearing?! These are meant to be fashion dolls aren't they?? The fashion police would have her locked up for that atrocity!

And all her body is covered with glitter...WHY?!? And none on her face...

Those bug things eyes are MEGA creepy, in a bad way, they feel like they're burrowing into my soul! Gonna give me nightmares!

The stand is gross. The bugs are gross. That outfit is gross.

Plus point, she does have a decent face. Even with the huge eyes. I also like the wood effect, but it does look a little overdone, I'd prefer it a bit more subtle like Cedar from EAH. They look really defined on this.

Permalink Reply by SammyWinchester on March 3, 2017 at 1:10am
She is atrocious! She's such an obvious EAH leftover. Her face is even very EAH! She makes absolutely no sense in the world of MH, as someone said earlier, there is NOTHING creepy or "monsterous" about her. A tree nymph? Why would she belong in Monster High?