For about 2 years now I've kept every MH box I got, hoping in case I sold my dolls it would be a bonus to have the box as well. However, they started to take up waaaay too much space, and so I decided to cut out the box art for those who can use it. I've seen various people use these for MH scrapbooks, paper dolls, and even decorating a room! To be honest, it's hard for me to let them go since I like them so much! So take a peek and let me know if there's something you'd like.

Most of them have already been cut/trimmed nicely, and the few that aren't will be if you'd like. Just let me know! Also, forgive th4e quality of the pictures - the camera I normally use was dead and the new one I haven't quite mastered yet. That and the light I was using was shining right above them...

Anyway, all of them are very pretty and these pictures truly do not give them justice. If you've seen the way the cutouts look from the fashion packs, these look pretty similar. Hopefully I can get better pictures come morning. If there's one in particular you'd like to see closer/clearer, I can do that too. 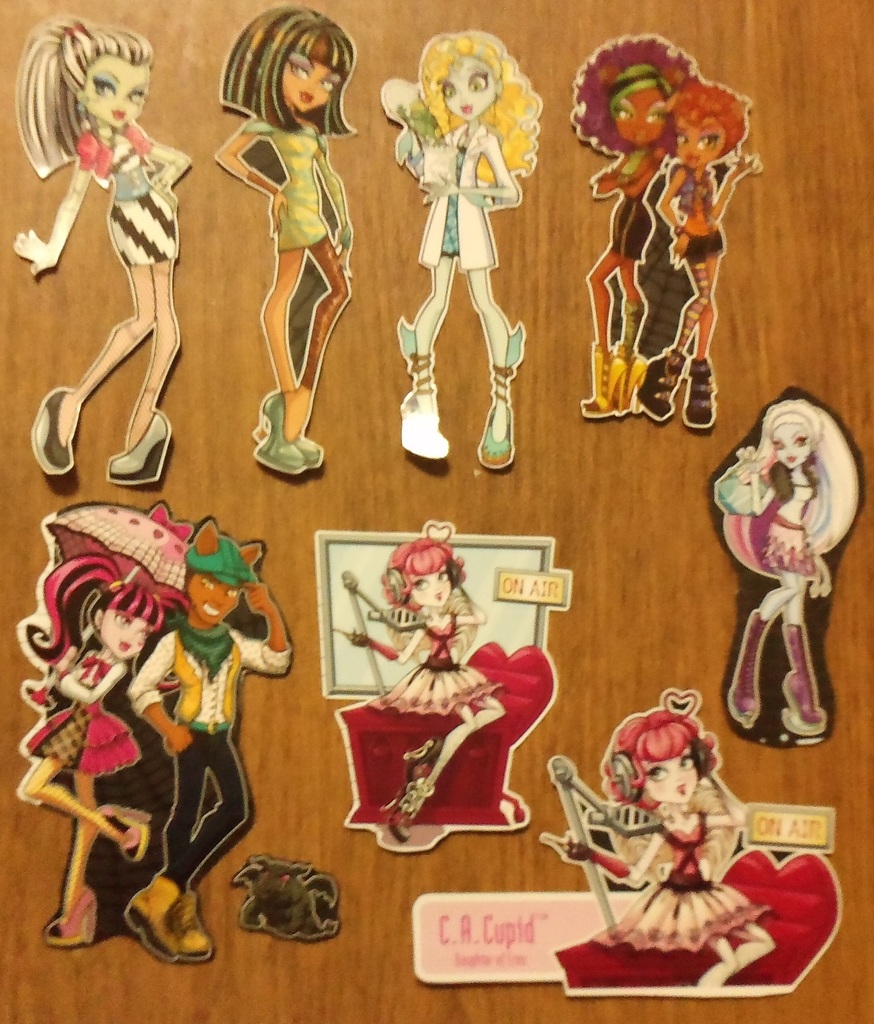 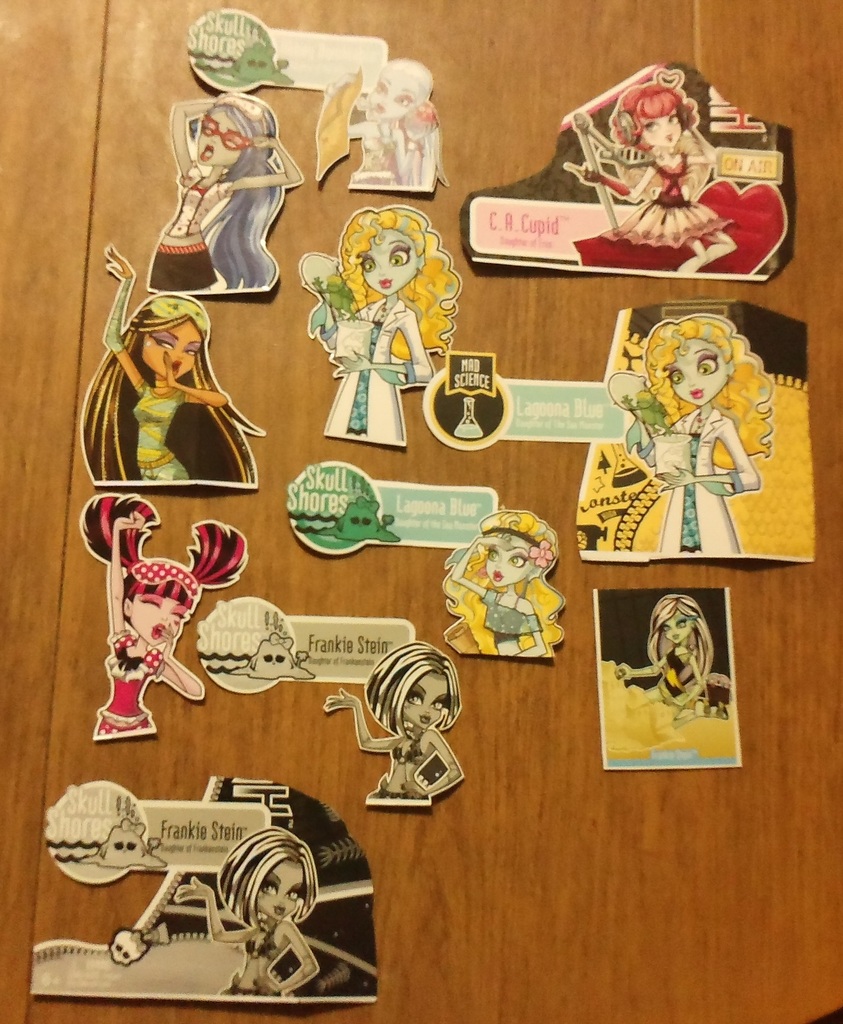 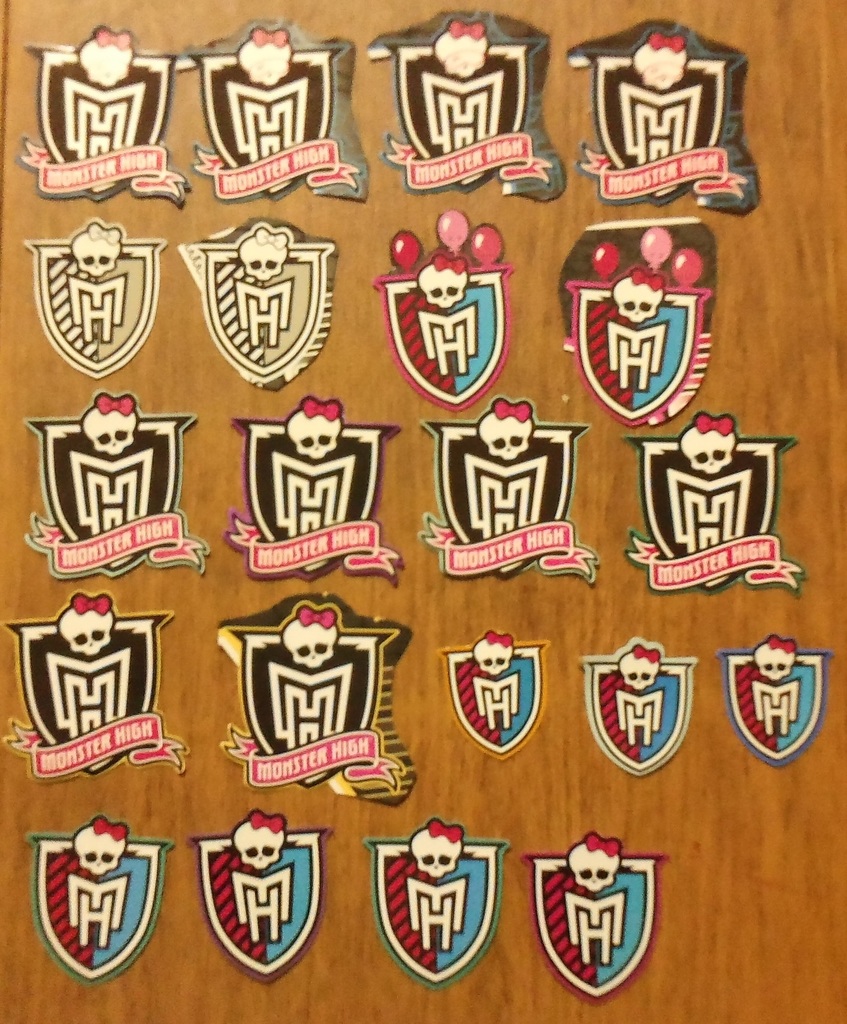 Pic 4 - MH Crests; Variations include Dead Tired, B&W Skull Shores, and various different color borders. Note some have "Monster High" on bottom and others do not. 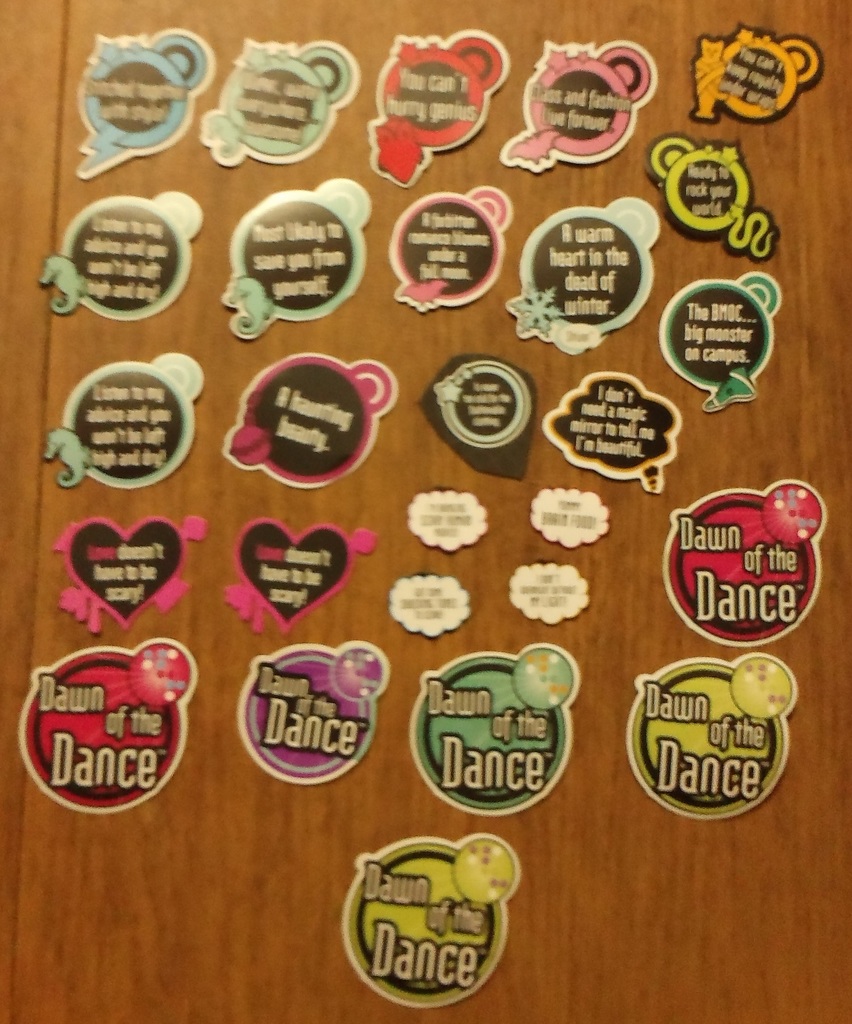 Pic 5 - Catch Phrase Bubbles, Dead Tired, Cleo Vanity, C.A. Cupid, and Dawn of the Dance. Note the catch phrase bubbles are mostly from the Wave 1 Basics, but also are from future basics like Spectra. 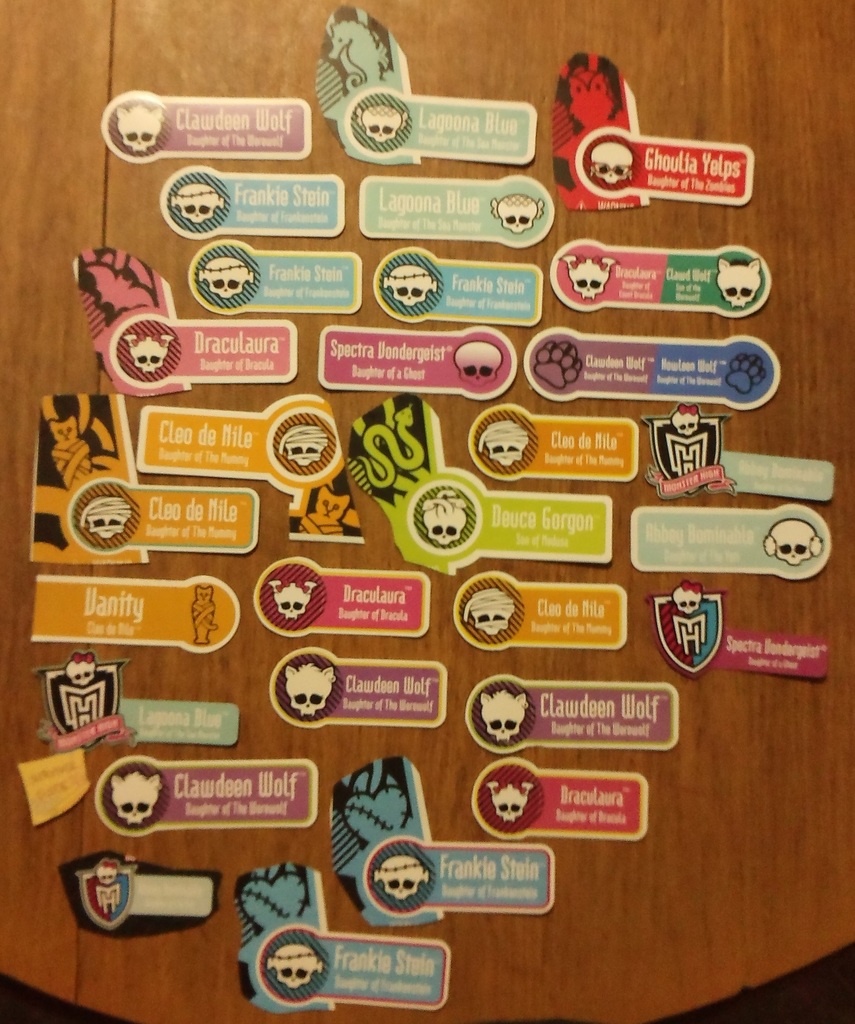 Pic 6 - Name Tags: located in the front of the boxes normally. Each has *name*, Daughter/Son of *monster*, and their Skullete. Come from different series, hence the different borders. 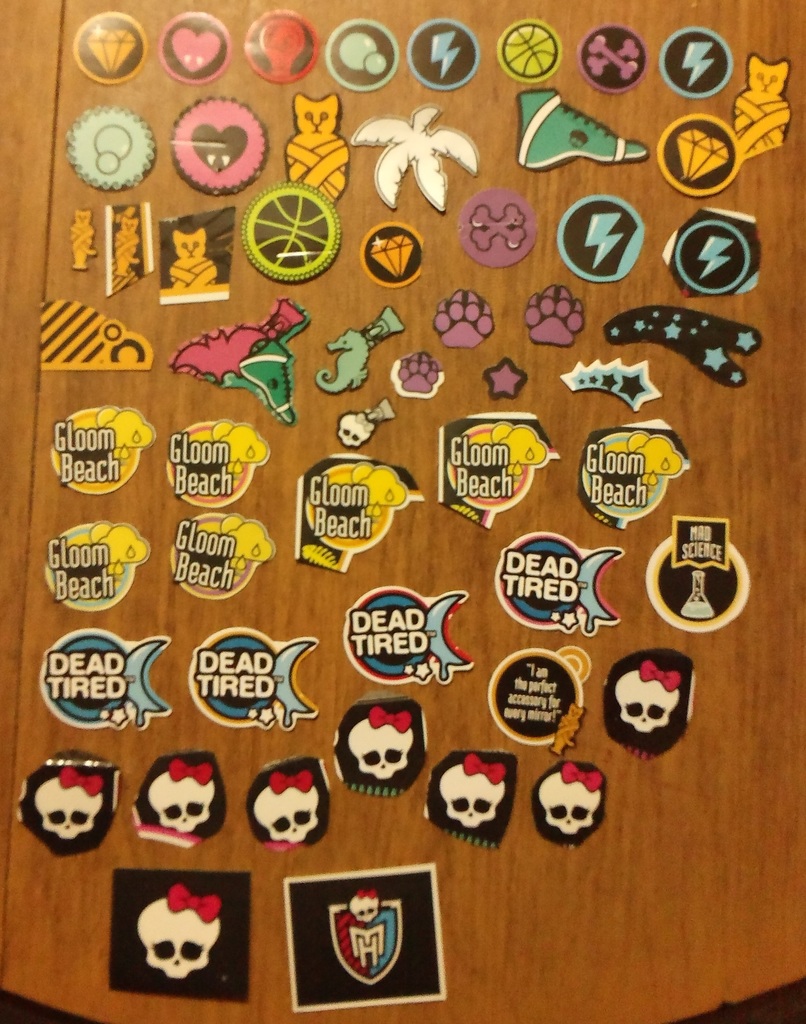 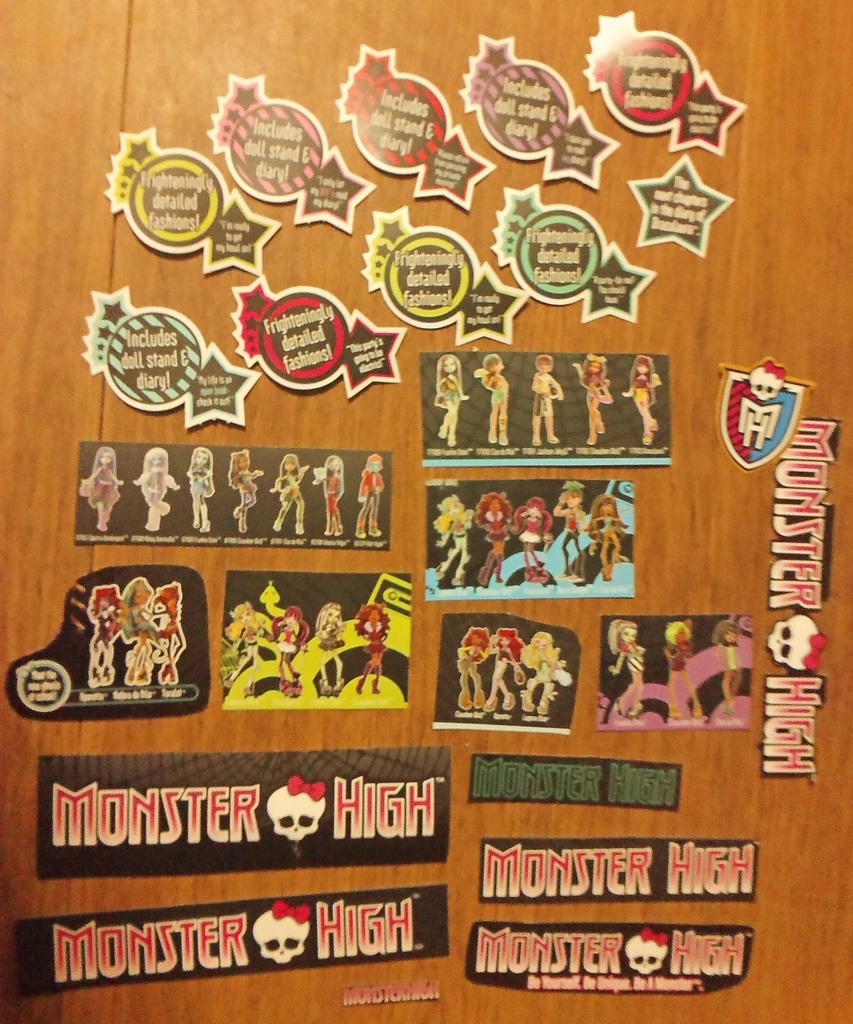 Pic 8 - Miscelaneous - have catch phrases, but probably better used as a picture frame of sorts? Also, can cut out the mini figures to perhaps be little paper dolls for Barbie or MH dolls. Pic 9 - More Miscellaneous: Blackboards, B&W palm trees, Sweet 1600 Cupid popout, Dead Tired stars and moons, and DOTD itineraries and Wolf Sister Letter (which were only available on the back of the box) 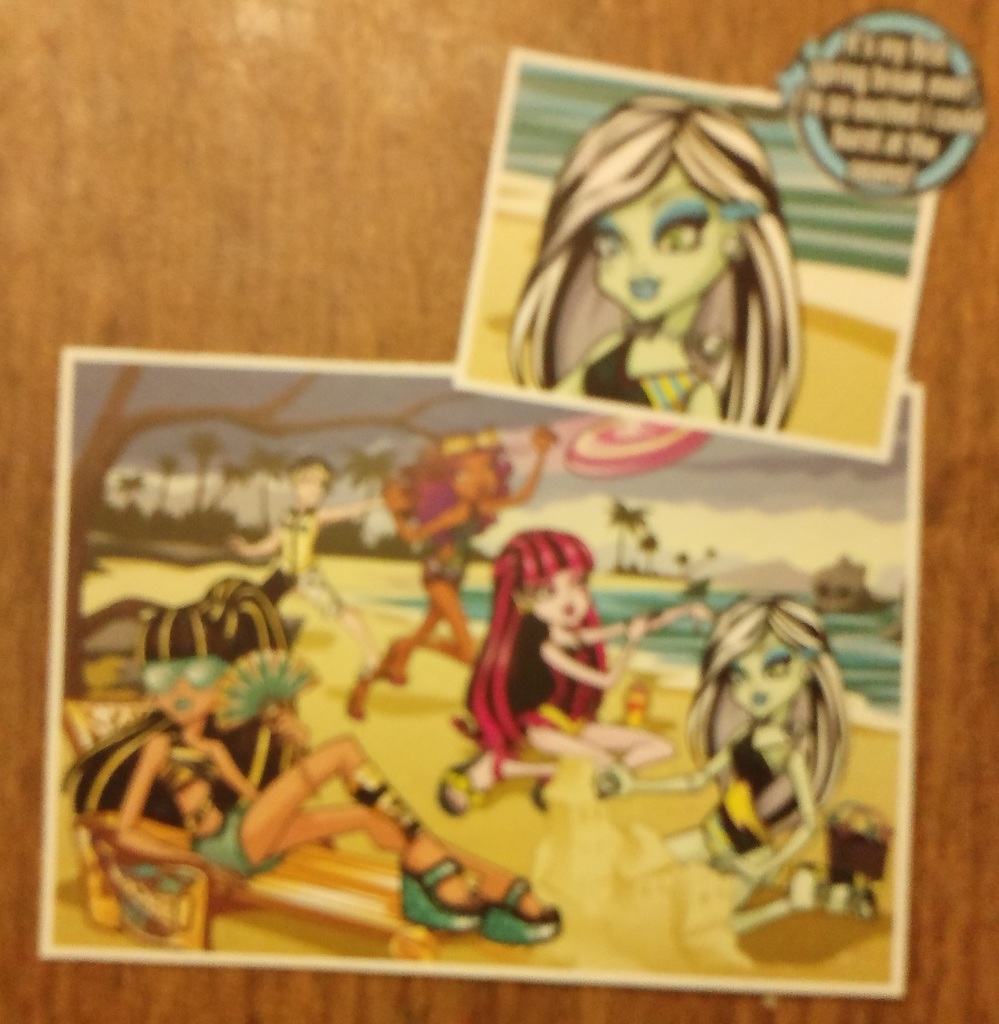 Pic 10 - Example of what I can do to the following Gloom Beach, Dead Tired, and Skull Shores box backings. It would have the group picture, a closeup of the specific character, and a little quote. 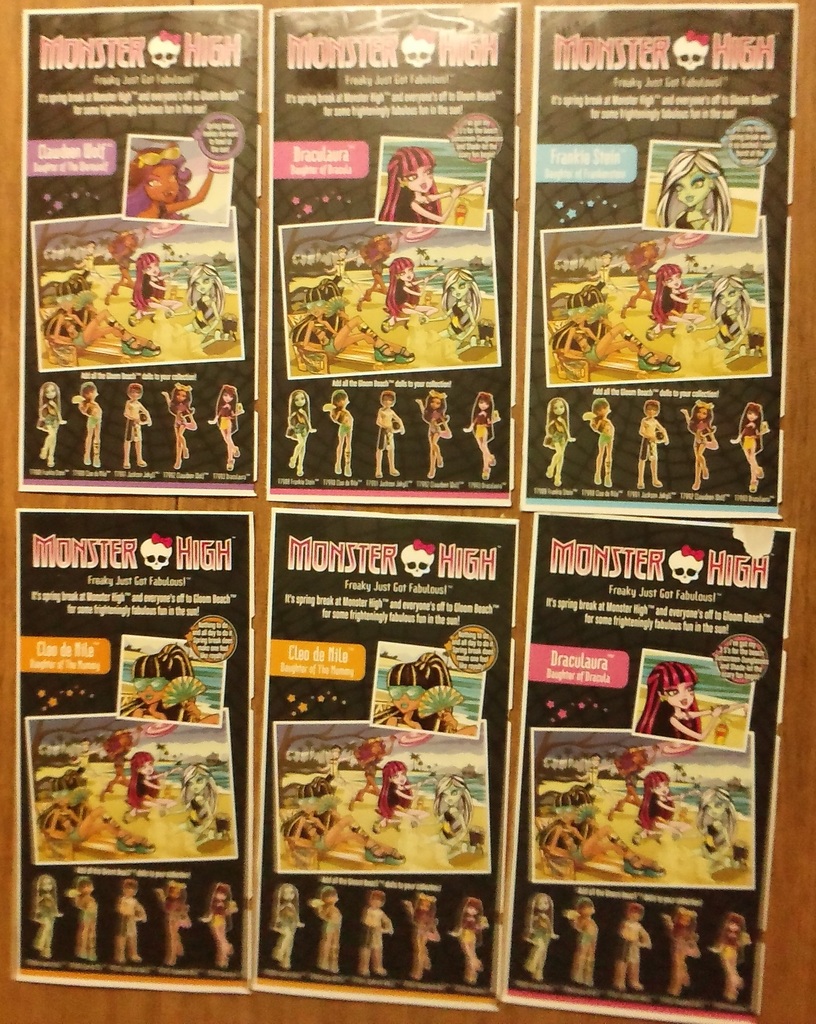 Pic 11 - Back of Gloom Beach Boxes 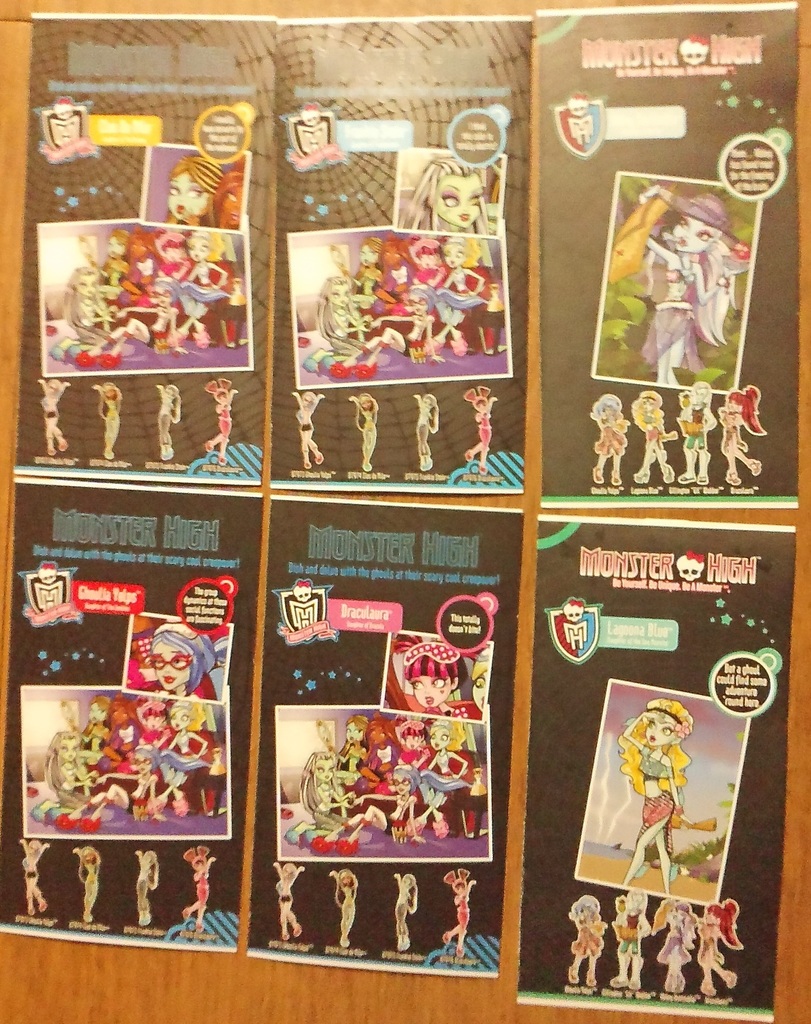 Pic 12 - Back of Dead Tired and Skull Shore Boxes. 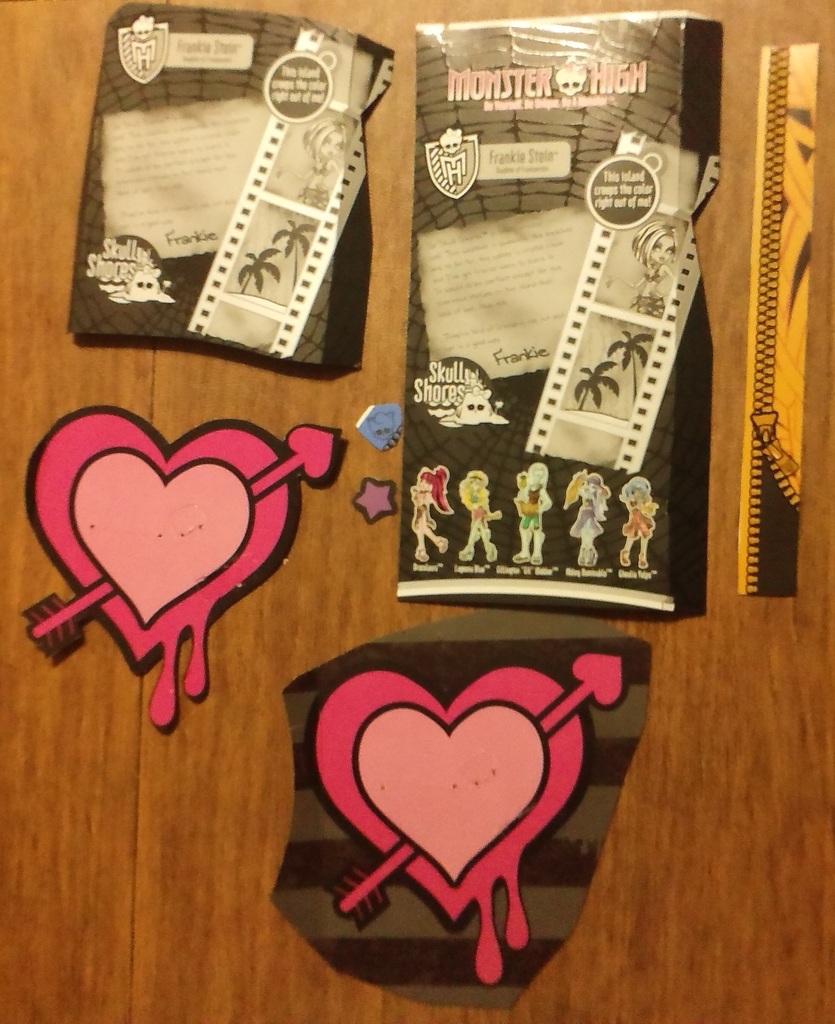 Pic 14 - Back of Mad Science and School's Out/Wave 2 Lagoona Boxes. 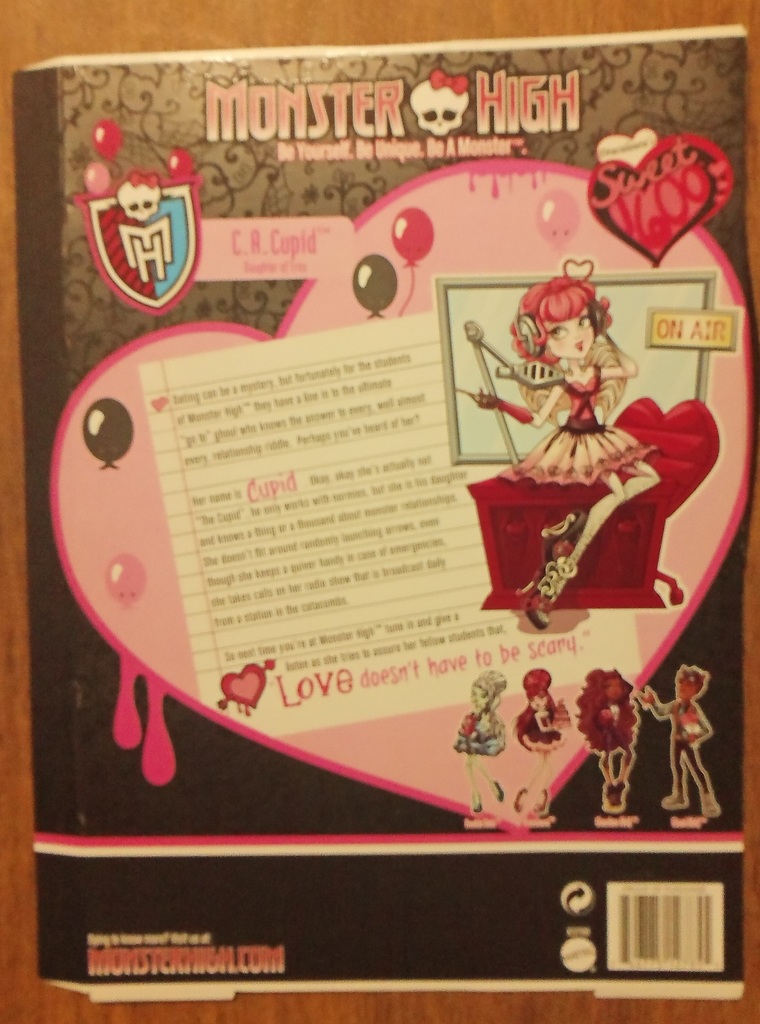 Pic 16 - Back of Dawn of the Dance Boxes. Can cut out the characters/pictures separately if desired. Itinerary also on box (not available on the cards).

Sent you a FR so we can talk details in PM.

interested in Clawd/Draculaura cut out and W1 Clawdeen PM me