On the page 4 of this Discussion, Blue Guzman spoke of his Ebay store. On it, you can see Cupid in a new box! 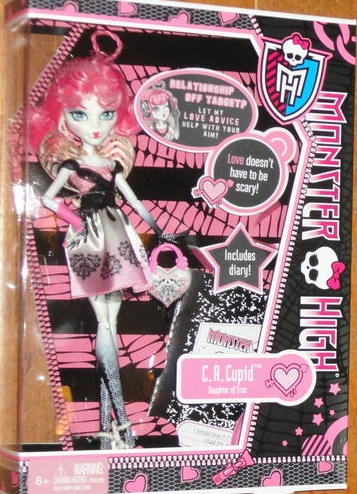 There are a few on Ebay (here and here)

Poor Nefera, not much love for her... although I think she is beautiful! (And I love villains)

I think she's pretty, too. <3 I hope they make a fashion pack for her some time in the future. She doesn't quite fit in the other girl's clothes.

Poor Nefera, not much love for her... although I think she is beautiful! (And I love villains)

You do realise someone will just put up the contents of the diary on the Monster High Wiki, right?

For me, it's about HAVING the diary... to put in my little binder o' diaries! :)

You do realise someone will just put up the contents of the diary on the Monster High Wiki, right?

if she had a pet i would be mad, pretty sad that she doesnt tho, youd think itd be a love bird er soething

These entries have been compiled partly from the diary I kept during my first year at Monster High. It is helpful to re-read them from time to time so that I do not forget…and make the same mistakes again.

I was summoned into my father’s chambers today. He is usually much less formal with his children and often comes to find us when he needs something. A formal summoning is usually reserved for those times when one of us has done something wrong or…we are about to be given an assignment. Since I’d never been given an assignment I immediately tried to remember what I could have possibly done wrong. I wracked my brain but the only thing I could think of was that maybe it had to do with my archery skills; or sad lack thereof. I hadn’t been able to hit the broad side of a kraken’s heart when I first started and although my aim had improved, anyone who happened to be on the range when I showed up to practice usually found another place they had to be and quickly. I was all ready to defend myself when I walked in but father cut me off before I could speak, with the announcement that I would be getting my first assignment. I was shocked, happy and nervous all at the same time! After all these years I would finally get my chance to make my father proud and put into practice all the skills I had learned under his training. He smiled at me and said:

Chariclo Arganthone Cupid, when I found you on the doorstep those many years ago my first thought was that you had been dropped off at the wrong temple. You were neither human nor Olympian and I was at quite a loss to know what to do with you. But you were so bright eyed and calm that something told me you had a place here. You have learned much but not all, for the rest may only be gained through experience. Thus I am sending you to a school called Monster High because it is a place in need of your skills and also a place where flaws are not looked upon as obstacles to success. You will enroll as a student and continue to hone your craft in a way that best suits the monsters you will be helping. I will check on your progress from time to time but I will not interfere.

Then he gave me a big hug, told me that he loved me and then I received my first real bow and arrows. My father had it customized with a laser sighting device that he said would considerably improve my accuracy. “I do not foresee this as being your most effective tool but there will be times when nothing else will be sufficient for the task.”

I said goodbye to my mother and my siblings and then father snapped his fingers and I was standing in Headless Headmistress Bloodgood’s office. “Welcome to Monster High, she said, I’ve been expecting you.”

So this isn't an exclusive anymore? how cool.

I wonder if they'll do other exclusives like this. I'd love a Howleen, haha.

Well at least we know her full name now! I guess Mattel decided to reveal it as so many people kept on asking about it :)

Well, this is nice for the people who wanted cupid but didn't want to pay the 1600 doll price (about 10 dollars more than basic) I was fine with that price, I just never got my hands on her. Now I am glad that she is a basic with a diary. I am happy about this.

Not fond of her hair, but her new box sure is cute!