Clearer pic of We Are Monster High 5 pack!

Gilda *so* reminds me of Jinafire.

Permalink Reply by MHDebbieM on June 29, 2014 at 6:31pm
Her brown spots are now pink. Kinda wished it stayed brown. And what does that target on her jacket symbolize I wonder,

she's a deer... she's supposed to be hunt... by whatever mythological greek warrior. So, a bullseye on her jacket.
i think it's spot on

i'm sad her horns are parts to attach to her head. Given mattel latest crappy quality i wouldn't be surprised to find some of those roaming in the boxes

Her brown spots are now pink. Kinda wished it stayed brown. And what does that target on her jacket symbolize I wonder,

yeah me too. lately MH promo shoots have been full of mistakes like that. I'd love to do that as a job and the person who's doing it can't even care to do it right

lol Did anyone else notice Slo Mo's shoes are on the wrong feet? Well, at least they appear to be.

Sorry I missed this, I wasn't online this weekend.

Generally, the prototype shoes used in principle photography are hard copies, which means they're molded from resin and are one step removed from the original sculpt.  Because they're made of a hard resin, they generally cast them in halves since there is none of the give the soft plastic/vinyl of the final production shoes.

Neighthan's hat from Toy Fair was also a Hard Copy, which was why it differed from the final concept of his horn poking out from a front hole.

I really want to see Gilda's head from the side, because she has ears that stick out from the head SIGNIFICANTLY, and that's generally something you can't do with a vinyl head that's going to be rooted.  I'm wondering if her horns and ears are part of a single piece glued onto the head, or if something else is going on.  If they can do ears like this for Gilda, why didn't they do something this significant for Cerise Hood?

In many of Mattel's promo photos the shoes look like that. Hopefully they corrected it before sending them into production. I think Mattel uses it's final approval photos as promo photos. Which seems a little odd to me, but I assume it's so that they can begin informal promotion before production actually begins.

It kinda looks like Gilda's boots split completely in half like Catty Noir's boots from 13 wishes. But Love this pack.

I love Gilda and hope she is matte like this. It's a really lovely buttery gold that looks nice with her pink. Also the lack of eyebrows, very few lashes and minimal makeup ( think she might have a faint bit of eyeshadow in neutral tone but it's hard to tell) is a really different move. It works here.

Her horns look like they're embedded into the head rather than sculpted as part of it, which is going to be really interesting to look at the construction of. Same with her ears as Drake said. If her ears do poke out properly, it just makes me more peeved they didn't do it with Cerise damnit.

But overall i'm eager to get my mitts on Gilda. She always was my favourite backgrounder. 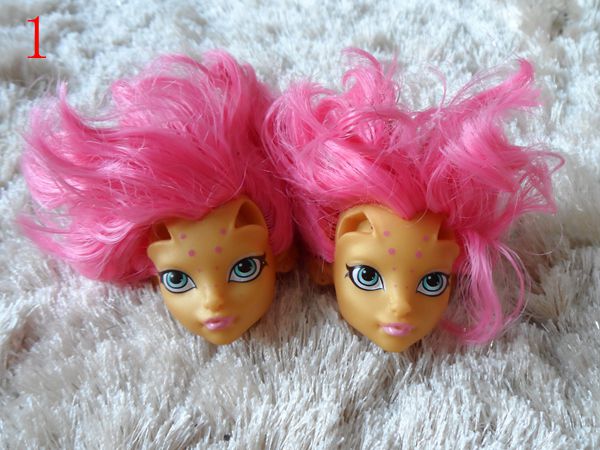 I kind of wish they would stop making 5 packs, it's so hard to find five dolls in one pack with no obvious issues with features and clothes. I do like these, but I'm not too fond of the Cleo in this one. Maybe I'll like her in person.  It would be nice if they gave us a Slo-Mo with his webisode clothing.

Just a heads up,Argos in the Uk is starting to get stock into their distribution centres.

I still think £70 for this set is a bloody joke though. It's far too much.

Permalink Reply by PlagueRat on July 1, 2014 at 6:34am
I'm going to go fill on Yorkshire here but when I saw the price on Purple's link I could help but go "how much?!"
Yikes! Pricey or what! I am going to have to, purely for Gilda...but wow...my poor wallet!

Wow, this will probably be in place for new catalogue launch, or even before, not enough time to save the £70, ahhhhhh!

Just a heads up,Argos in the Uk is starting to get stock into their distribution centres.

I still think £70 for this set is a bloody joke though. It's far too much.