I found all of this for $20 at my local thrift. I'm new to Monster High, is there anything here that is more valuable or rare than normally seen?

Also I'm trying to figure out how to look up the names of each Doll. The number/letter engraving on their backs, different for each Doll, does not show any results when I search the Web for those numbers.

Some of the accessories are not Monster High stuff, but I'm not 100% sure what is and what isn't.

Thanks for any suggestions :) 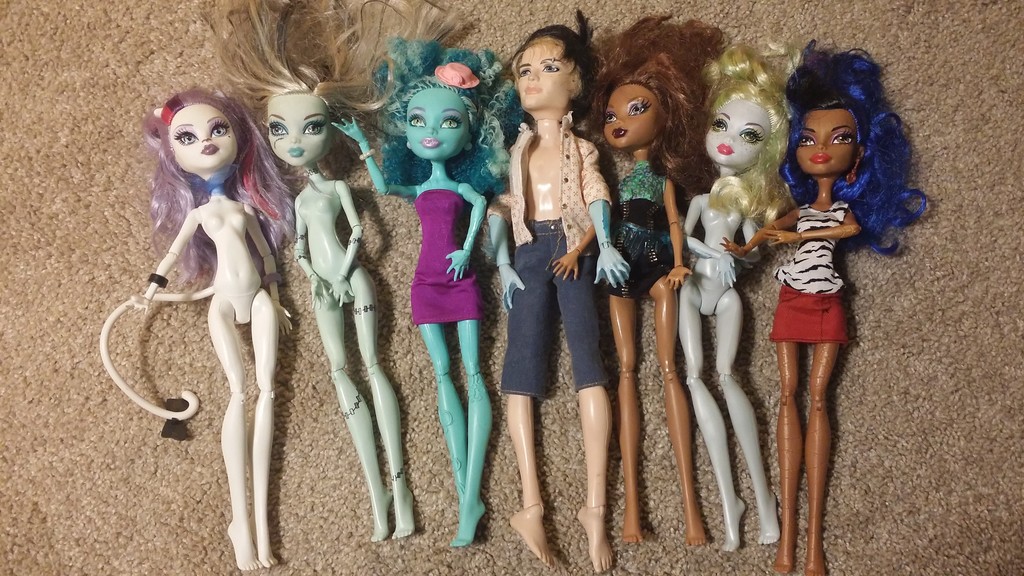 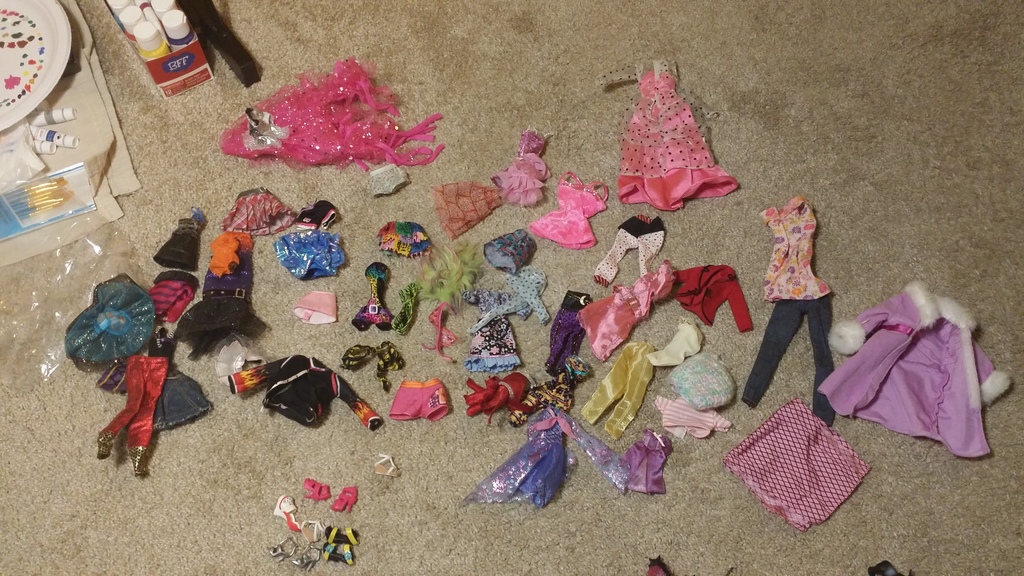 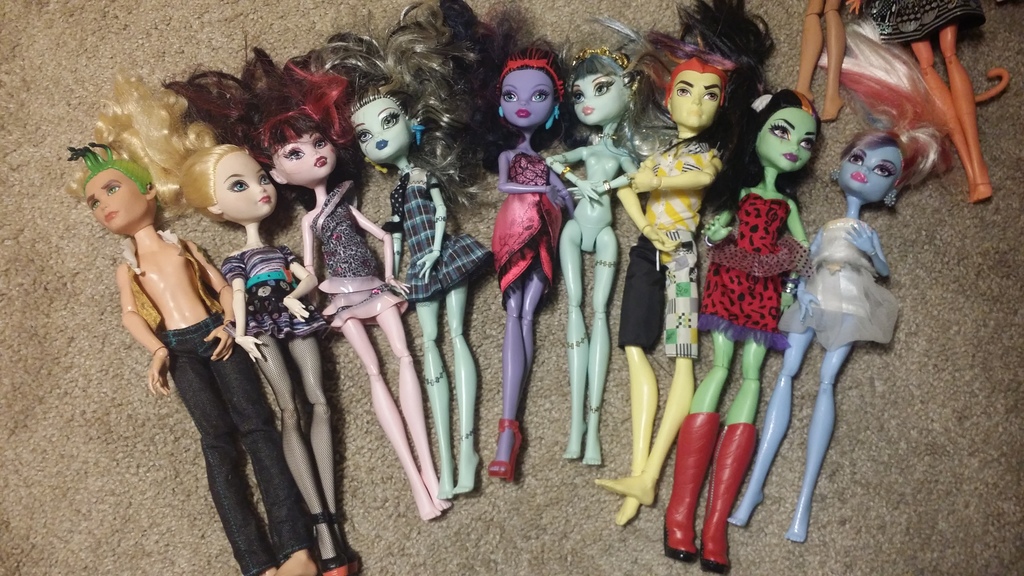 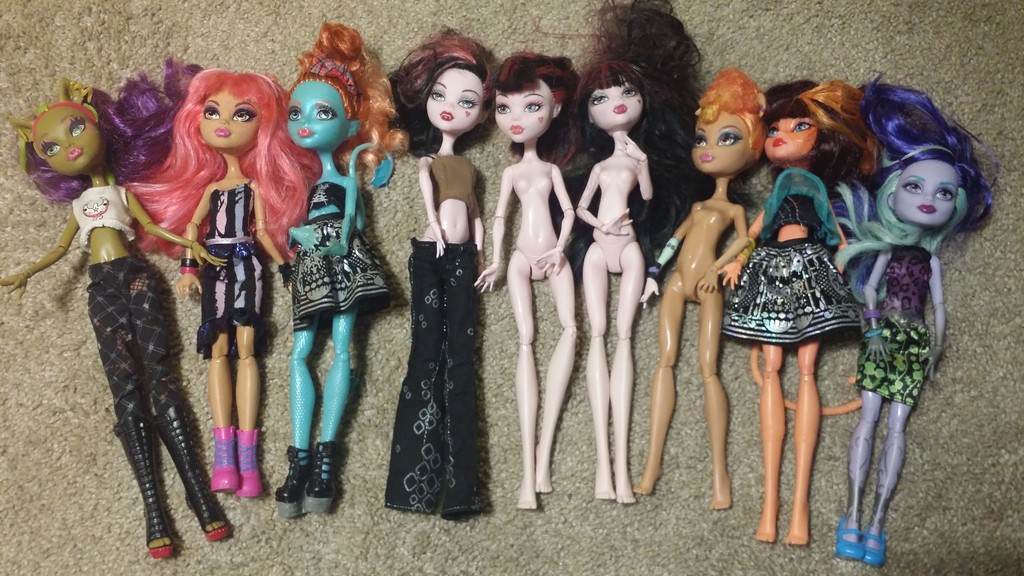 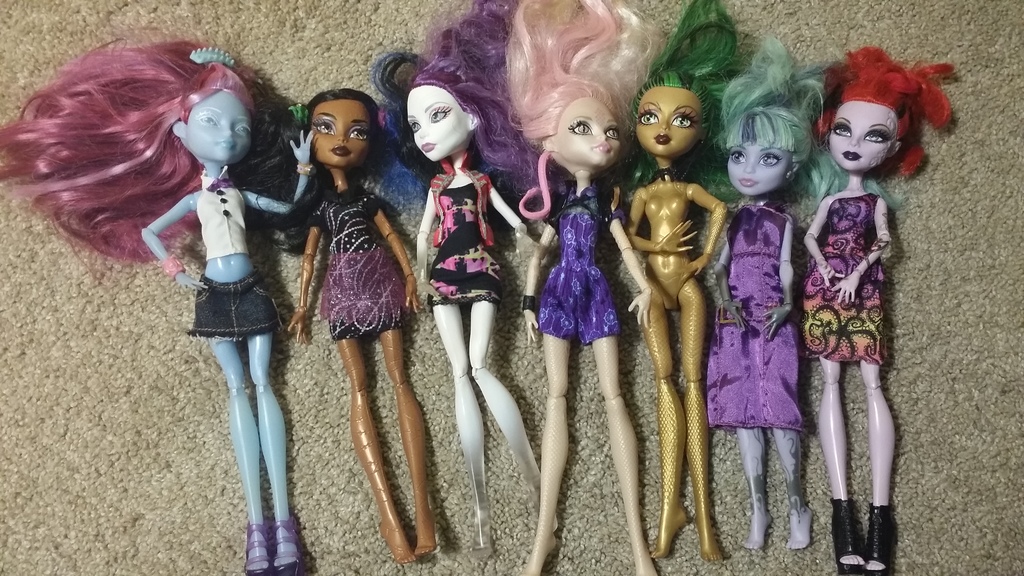 first picture: Catrine, her Scaremester doll by the looks. Frankie is Gloom Beach (if she has elastic hips she's an old one, if not she's a rerelease), Honey Swamp (her frights camera action doll), that's Gloom Beach Jackson (the first jackson released) but he has Gil's hands, that's weird. You can buy replacement hands from Mattel. That's Clawdeen, maybe her signature doll?, i'm not sure which Lagoona that is and then Robecca steam's er.. I think that's art class.

Second picture: That's a lot of accessories there. The one skate belongs to Gil. the pair are Abbey's roller Maze skates. You also have Clawdeen's cat, Howleen's hedgehog and Draulaura's bat. Given how random that assortment is, it'll be easier if you draw up a grid with numbers and put one thing in each box (or each pair of shoes), then we can tell you what's what more clearly.

Same goes for image 3, but I can tell you right away you have a few barbie bits in there too.

the pink frilly thing with silver is Catty's outfit. The jacket with teh flames belongs to the yellow boy in picture 4.

Deuce Gorgon, he has articulated wrists so he's gotta be one of his later releases. Probably Scaris? the boys are quite awkward in that most of their releases are identical.

Next to him is an Ever After High doll (Apple White) wearing Catrine 's scaris outfit (minus belt and shoes, those are someone elses')

Draculaura could be original signature drac with her pigtails out, or could be forbitten love, I can't make out her face so well.

Jane Boolittle is wearing Ever After High Briar's outfit.

then you have "haunt the casbah" Frankie

Casta Fierce (her dress is the purple and orange one in the bundle of clothing). The outfit she's wearing belongs to Operetta, the shoes belong to a werecat.

and finally you have Abbey, judging by her hair style i'm thinking she's the home ick one that goes with Heath.That outfit she's wearing isn't even MH.

Clawvenus (freaky fusion) wearing freaky fusion Scara's pants, bratz shirt and a werecat twin's boots. The girl on the opposite end with the purple hair is wearing her outfit.

Howleen's 13 wishes doll, wearing the Catrine from picture 1's outfit and one of the other Howleen's shoes.

Lorna McNessie wearing Rochelle's skirt and the belt that goes with that red dress Casta is wearing (it's operetta's) Those are her original shoes though.

Draculaura's pants are Deuce's, lol. I don't know which ones that one and the one next to her are but the third one is Diener playset Drac.

Next to her is Cloelei, from freaky fusion. She's wearing a lagoona top and another Rochelle skirt.

Finally there's coffin bean Twyla. The pink haired doll with the snakes in picture 6 is wearing her jumpsuit.

Picture 6: Kyomi Haunterly, wearing a bratz skirt, Abbey's shoes (skull shores?) and Clawdeen's sweet 1600 top (you also have the pants for that set in the bundle of clothes, they're purple with a high waist band)

Robecca's signature doll (her outfit is the blue and black thing in the bundle of clothing) wearing the outfit that belongs to Abbey in picture 4.

Spectra is wearing a werecat twin's jacket and venus' music festival dress. I'm not 100% sure which spectra that is. Probably the djing one (because you have the purple dress she came in, Honey's wearing it)

Jinafire Long (I assume her scaremester doll. Her pants are the red shiny ones in the bundle)

Operetta is I think the Khol's exclusive one. You don't seem to have her outfit.

In fact you don't seem to have a lot of their outfits. Which is odd. Looks like there's stuff from dolls not present as well, weird.

I would suggest looking each of these up to figure out if you have any shoes or accessories and confirm what goes with whom, then take a picture of everything else that's "orphaned" (so to speak)

Permalink Reply by EnterTheVoid on March 30, 2018 at 2:32pm
Wow, thank you so much. You are very knowledgeable! You've given me so much great info to guide me. I really appreciate it :)

OMG Lots of Monsters! It is a great find. I bet it will keep you occupied for a while!

Everything has been said about "who is who" and "what belongs to who" in a very detailed way.

They don't have to wear their original clothes if anything is missing, they are free spirits!

I think the Lagoona in the first picture is her Roller Maze doll. And the first Draculaura in picture 5 is the Roadster doll coming with the car. She is one of my favourite Draculauras.

Thinking about it, I am really not sure which Lagoona it is in picture one! lol

It could also be Dance Class but she remains a mystery to me! She is not easy to identify. I would like to know which one it is out of curiosity.

Fabulous Find from your Thrift store & what a great price. Thank you for sharing your treasures with all of Us.

I think that's Skultimate roller maze Lagoona. The big giveaway is if she has green streaks in her hair as well as blue (hard to tell in pic, but looks like she might). Also if her right hand is in the hang ten position (again, can't see in pic), as only two of her dolls had that:)

Yes, that's what I thought at first but I had more and more doubts. She also should have some yellow eyes make up which is not visible in the picture.

Zoomed it in in Photoshop which helped, I think you can faintly see the green in the hair and the yellow round the eyes if you get in closer:)